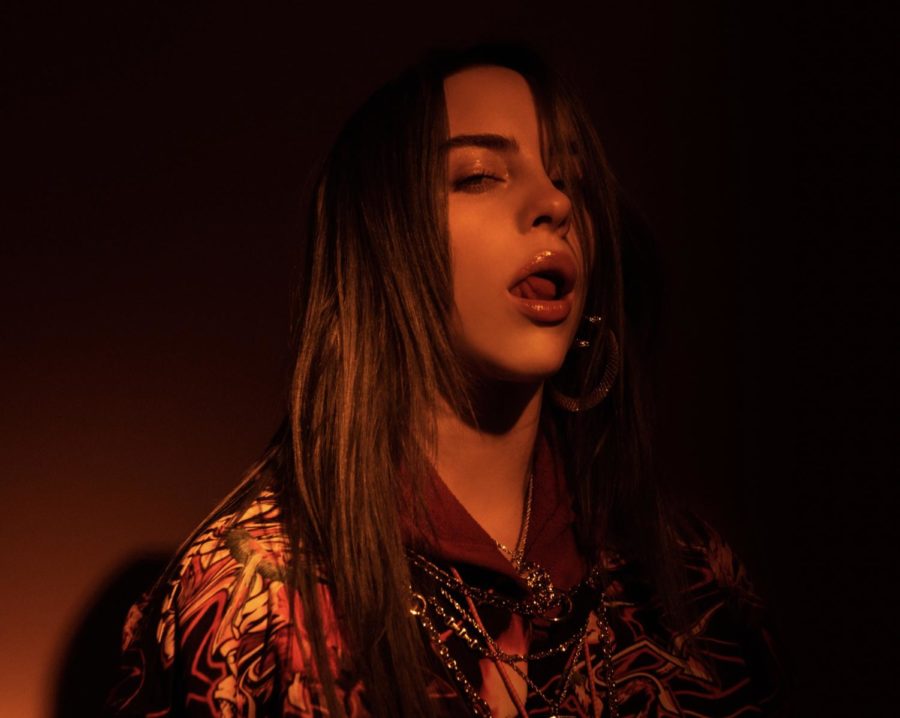 Pictured is Billie Eilish posing for the album's "artist photo."

Billie Eilish’s debut album “When We All Fall Asleep Where Do We Go?” brings a variety of unique yet cohesive songs that are reshaping the norm of pop.

Eilish is a 17-year-old American singer and songwriter. Eilish’s 21-year-old brother Finneas O’Connell, produces and collaborates on much of their music. In 2016, they released the debut single “Ocean Eyes” which kick-started the success of her career.

Eilish and O’Connell wrote, produced, and recorded the entire album from inside their own home. As of April 28, the record has spent two weeks at No. 1 on the Billboard 200 charts. It also broke the record of the third largest streaming week for a woman’s album.

“Bury a friend,” the third single released, kicked off the album with an uncomfortable and alluring yet eerie feel. The song’s eccentric layers along with the video’s nightmare-like feel left fans astonished and wishing for more.

“When we made ‘bury a friend’, the whole album clicked in my head,” Eilish said. “I immediately knew what it was going to be about, what the visuals were going to be, and everything in terms of how I wanted it to be perceived. It inspired what the album is about.”

The album starts with an upbeat and quirky song, “Bad Guy,” which brings a playful lightness to the collection. It contradicts the assumption that she is only capable of writing songs of sorrow.

“We wanted it to sound like what it felt like to be in second-hand smoke,” Eilish said.

The intense bass and distorted voice have a power that feels as if the song flows through the entire body. It has a bite that makes the listener want to play it on loop.

Eilish also opened up to her fans about how her synesthesia plays into the album. It is what ultimately guided her to create each song with an experience of its own.

On the release day, she opened up “The Billie Eilish Experience,” an exhibit that displayed every aspect of the album.

When describing the exhibit to Billboard, Eilish said, “It’s a place to smell and hear and feel the album. Every room has a certain temperature, smell, color, texture on the wall, shape, and number. I wanted to take my synesthesia and show everybody what it feels like. That’s how I create music in the first place.”

Eilish used common phobias in her videos such as spiders and needles. She explained that the entire album is “a dream” whether it’s a good dream, a nightmare, or sleep paralysis.

These daunting concepts are what make Eilish stand out in the landscape of pop. She is not afraid when it comes to showing people something new, whether they will like it or not.

This is the kind of risk that is needed in the music industry right now.

Although the album has exceptional tracks that are sung mostly by Eilish and partly by O’Connell, it, unfortunately, had no featured artists. Features enhance an album immensely and keep the listener interested by bringing something unfamiliar to the overall voice and tone. With a lack of features, an album can become stale quickly.

Another masterpiece, “Listen before I go,” provides its own disparate atmosphere. The smooth simplicity of the song begins to close out the album and the minimal background music allows the listener to tune into her vulnerable lyrics and get lost in her aching voice.

The lyrics of “Listen before I go” almost resemble that of a suicide note. Eilish has been relatively open about her mental health struggles and expresses them through many of her songs, including this one. The distress in her voice oozes raw emotion while following a significant storyline.

Eilish and O’connell’s offbeat production, captivating vocals, and unique ideas came together to build a revolutionary work of music. Eilish manages to unite 14 different songs into one of the best pop albums of the generation.