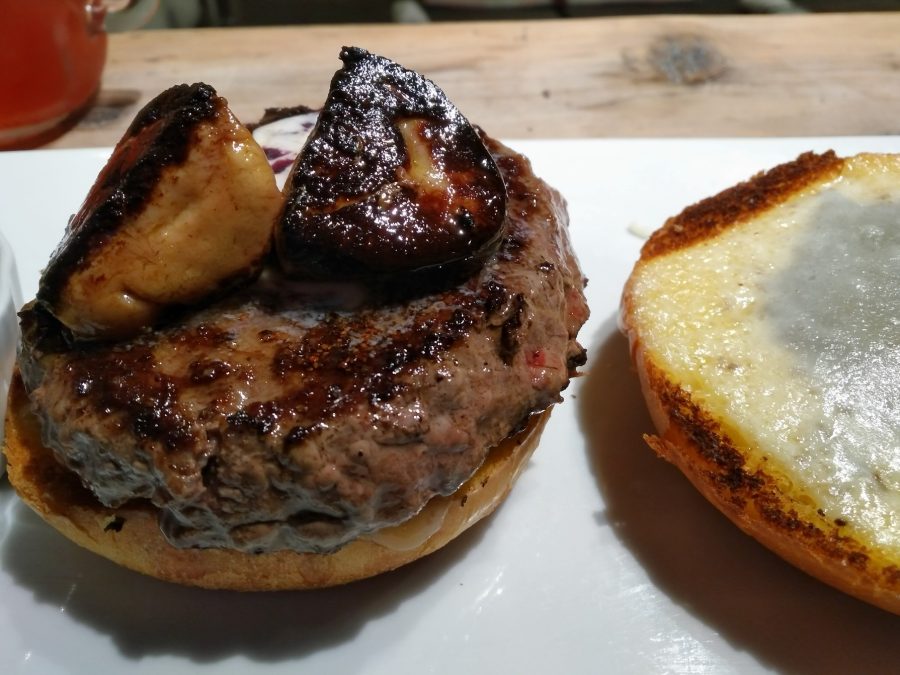 The foie gras sit upon the kobe beef, while the winter truffles leak flavor into the translucent cheese.

Another burger joint… I never thought it would come to this. In-N-Out, Five Guys, Jack In the Box, and McDonald’s just weren’t enough. I was tired of seeing the ridiculously numerous facades advertising greasy patties and cheap, gooey cheese-ish cheese, so I decided to try Bistro Burger in San Carlos. Actually, ignore the first sentence; Bistro Burger isn’t some second-rate assembly line restaurant with workers in uniform milling about trying to please the madhouse before them. No, Bistro Burger is an actual high-quality eatery with waiters in a panicked frenzy to stave off the mass of starving people before them.

Bistro Burger is probably one of the best restaurants to get a classic American staple: the burger. The Counter has its moments too, but Bistro Burger is just on a different level. Can you get foie gras at the counter? No! Can you get it at Bistro Burger? You absolutely can. First off, the introduction was no exaggeration; the place is really crowded. I had trouble finding a seat inside, and even the bar was almost completely filled. People stood outside only to be told off because they were so full of clientele.

The drink menu was run-of-the-mill with Coke, Sprite, etc. However, one thing caught my eye: a Tiger Woods. It was essentially an Arnold Palmer (lemonade and sweetened lemon tea), but with black tea. However, its taste is superior to the Arnold Palmer — or perhaps that’s just my tea preference giving me bias. It wasn’t sweetened with sugar — Bistro Burger doesn’t commit acts of peasantry such as that. Rather, it was sweetened with agave or some another type of nectar. Honey has a very distinct flavor, but it was not there, neither was its texture that one may feel once it falls to the bottom. The sweetener was less syrupy than honey and bore a different flavor. Regardless, it was good. Its misty amber hue was also quite attractive, presentation-wise.

To make sure I knew the full capabilities of the eatery I ordered their most expensive burger — a $23 kobe beef and foie gras burger, complete with white cheese containing a thin spread of winter truffle, red wine butter, all with a side of potato au gratin. This entree was a fine thing indeed. The foie gras was fatty and delicious, and the two oyster-shaped ones that sat upon the beef truly enhanced the meal. The truffles were rich with flavor — the black ground delicacy was trapped beneath the cheese, letting the flavors reciprocate into one another. The butter slowly melted into the beef’s own juices, which had marinated the fluffy brioche buns that contained the “apex” of burgers. After one bite, the beef leaked cascades of hidden juices and flavors. I even found a what I believe to be a cranberry hidden with the depths of the beef — perhaps a secret ingredient?

The same praise cannot be brought to the potatoes. Perhaps the burger heightened my expectations, or it may just be that they are just pretty good. The potatoes swam in some melted cheese or sour cream sauce. Tackling the burger and then the potatoes leaves the potatoes lukewarm, leaning to the cold side. The potatoes themselves had good texture, but too little flavor to compliment them.

The burger which peppers all the taste buds with its astounding amount of potpourri is accompanied with a side of potatoes which could be improved.  Personally, I suggest more cheese in the sauce. I understand the burger is rich and they want to balance it out with a lighter side, but they must be bolder. The presentation was impeccable, but the flavor was not at a similar level of complexity. The potatoes must also be smaller; the burger is huge, and I could not eat more than three potatoes once I finished the burger. Though they still were good, the burger outclasses them too much.

In conclusion, definitely spend money here. As a new business, they are improving, and I hope the best for them. They do not take reservations, so be sure to be ready to push, trample, or use any other means to eliminate the other patrons; trust me you won’t regret it. For more information, their menu is linked here. For the hours and location, visit their Yelp page.