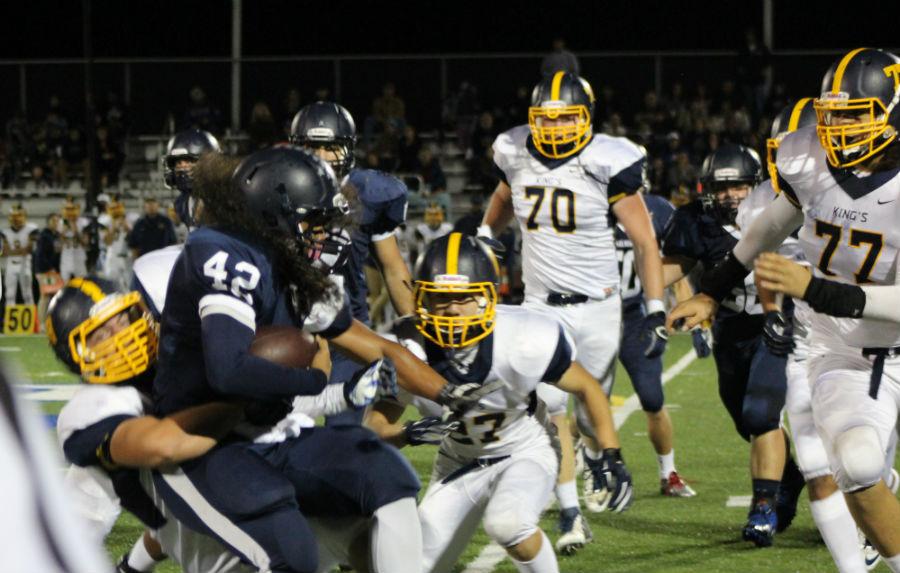 Strong safety and quarter back Willie Teo refuses to give up the ball.

Varsity football’s last home game ended in a merciless lost against the King’s Academy Knights on Friday, Nov. 7 with a final score of 47-14.

“The game was bittersweet. It sucks that we lost, especially since it’s our last game at home. But it felt great to play side by side with my classmates one last time at Carlmont before we [the senior class] all go on our separate ways,” said senior and kicker Aaron Albaum.

King’s Academy displayed their superiority early on in the game when they scored the first touchdown just three minutes into the first quarter. The Knights continued to dominate the Scots until senior and running back Dominic Blanks scored Carlmont’s first touchdown at the end of the third quarter.

The third quarter concluded with a score of 27-7 with the Knights in the lead.

“We had a lot of issues with coverage and tackling, and at the end of the day, King’s Academy played a great game. They’re a very disciplined team, and stayed with their game calls all night long,” said varsity head coach Rich Gianuario.

The Knights scored three more touchdowns during the fourth quarter. The Scots managed to score one. Ending the grueling game 47-14, the Knights took the win.

“Even though we lost, it was a good game because we’ve worked hard to get this far. It’s kind of an emotional night too because we’re coming to the end of the season, and it will suck to see the senior class go. But I’m excited for next year’s season. It’s a bittersweet end,” said junior Mark Bellin.

Friday’s game was one of the most important games of the season as the results determined which playing team (Carlmont or King’s Academy) would battle Capuchino High School for first place in the league. The lost has bumped Carlmont’s standing down to third place.

Despite the dramatic lead the Knights maintained throughout the game, the Scots continued to work as a team.

“Losing is always hard, but I think the most important thing to remember is that we came together and played a team. That’s even better than winning because if you can’t come together as a team when you lose, then you won’t be able to play as a team when you win. We fought hard, and did everything we could,” said Blanks.

Many seniors on varsity have played with each other for multiple years, and have formed a unique bond with one another both on and off the field.

Strong safety and quarter back Willie Teo said, “These boys are my brothers. We’ve been together for years, and it sucks that it’s all coming to an end. I’ll always remember what we all accomplished together as a team and how we’ve grown to be friends.”

The last game of the season will take place on Friday, Nov. 14 at Sequoia High School.