Black Friday fails to live up to expectations 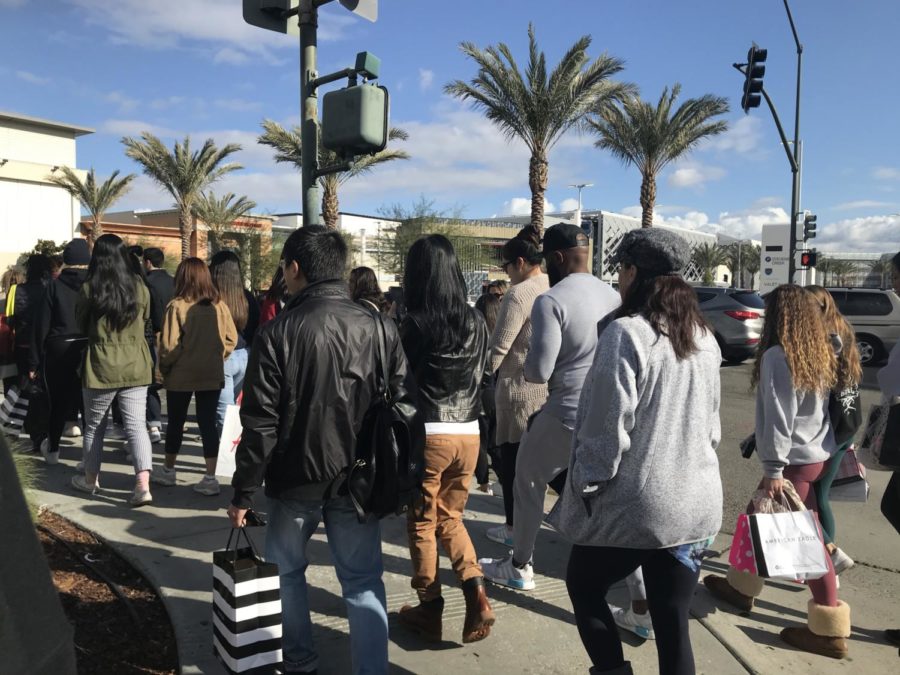 Crowds of people swarm to Valley Fair during Black Friday.

Despite its amazing deals, Black Friday  impacts the environment and can be a poor experience for customers and workers alike.

Black Friday is widely considered the biggest shopping event of the year. It comes the day after Thanksgiving and attracts large amounts of people who flock to different venues hoping to save some money on the many deals offered.

The event has been around since the 1920s when Macy’s had their first post-Thanksgiving sale. Macy’s success with the sales lead to the spread of Black Friday, and it continues to increase in participation each year.

This Black Friday, people of all ages crowded into stores that opened as early as 4 p.m. the day before to save money from the numerous deals offered. For stores that open early in the morning, many even camp outside them the night before to ensure that they get in early to shop before everything is sold out.

“People feel like they’re missing out if they miss sales on items they would want to purchase, making unlikely shoppers more likely to shop as well, which increases the volume of people shopping,” said Isha Chakraborty, a student at Caltech.

Though they may have saved some money, they got more than they bargained for.

When entering stores, the air was hot and stuffy. Paper bags exploded with items, and bodies pushed and shoved to reach the front of lines that stretched for ages, making Black Friday anything but an enjoyable experience.

“We waited in line for half an hour just to get into [a store], and when we got inside, there was hardly anything left,” said Addison Cronin, a freshman at Saint Francis. “We ended up getting nothing and wasted our time there.”

Others had similar complaints.

“It took over an hour to find parking, and once we got in, there were a lot of security guards everywhere trying to make sure there weren’t fights or people stealing,” said Penny Heith, a sophomore at Carlmont.

The less-than-desirable consumer experiences of Black Friday are nothing compared to those of the workers.

Forced to combat aggressive shoppers all day, store employees often have to work extended hours for the event, in some cases staying up all night. This year, some stores didn’t even offer reasonable compensation for their time, merely giving them small bonuses.

“There are just so many more things to do, and I have to be more aware of everything because of all the crowds and chaos,” said Alisha Zhou, an employee at Hollister.

Not only is Black Friday a negative experience for store workers and customers, but it also forces buyers to buy more than they usually would, and, as a result, spend more.

“I try setting a budget for Black Friday, but I probably still end up buying things I don’t need,” Chakraborty said.

Chakraborty isn’t alone in unnecessary spending. A majority of consumers compulsively buy items that they don’t have a need for because of the deals offered.

Ultimately, these items will get thrown away and wasted, contributing to the world’s immense over-consumption problems.

Not only do people waste the unnecessary items they buy on Black Friday, but they also throw away old belongings that could’ve been used longer as they get replaced by new ones.

For instance, millions of shoppers buy and throw away smartphones and TVs that could’ve remained in use. Items like electronics and plastics which are still in perfect condition get thrown out due to the appeal of buying new devices for cheap.

When these electronics are thrown out, they release toxic chemicals like lead and mercury.

According to EPA, only 15% – 20% of e-waste is recycled, and the rest goes directly into landfills and incinerators. These incinerators burn the waste and then release toxic chemicals into the air.

Not only are items thrown away and bought unnecessarily, but the process through which people receive them is also wasteful. At stores, items can be wrapped and packaged, wasting paper and plastic. The packaging and wasted belongings fill up landfills, contributing to growing environmental problems.

Online delivery is, if anything, worse. Black Friday and Cyber Monday make a significant impact on the environment by polluting the air due to the number of delivery trucks bringing packages to the people who ordered items online.

As Black Friday and Cyber Monday continue to grow in popularity, the future of the environment remains in question. Until people find a way to reduce waste, these bargains will continue to contribute to the planet’s growing problem with waste.

It’s safe to say that Black Friday is not only a miserable experience for everyone involved, but it’s also an opportunity for people to spend unnecessary amounts of money on items they don’t need while negatively impacting the environment.

Ultimately, the experiences that employees and shoppers face is unpleasant, to say the least. Although the sales may seem to be worth the expenses, Black Friday overall is more of an adrenaline rush over finding good deals rather than an enjoyable shopping experience.

“I think if you go into Black Friday with an ultimate goal or agenda and you stick to it, it can be profitable,” Chakraborty said. “But otherwise, it’s just people buying into consumerism for marginal benefit.”