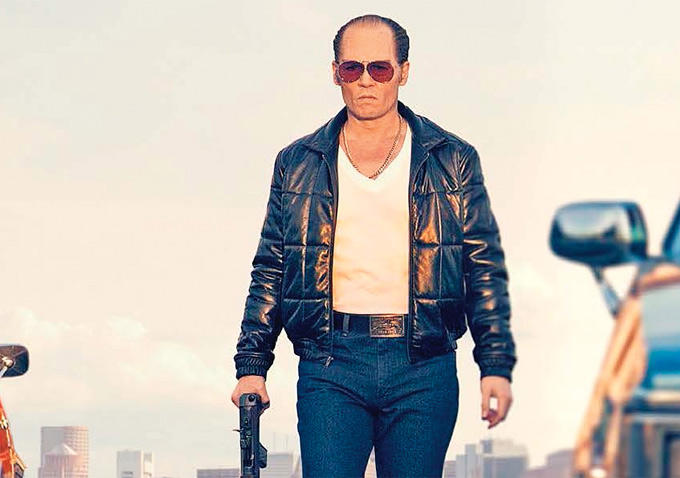 Whitey Bulger (Johnny Depp) walks off from murdering his friend, untouched by the gravity of his act.

A Boston mobster teams up with the Federal Bureau of Investigation to take down the Italian mafia in Boston. In return, his murders and drug deals are overlooked.

A story as intricate and compelling as this could only be a true one. And it is.

Gritty and visceral yet subdued and sincere, “Black Mass” (R) goes down like sweet sweet nectar but with a bite.

The calm pace is counter-intuitive given the violent nature of the film, but it succeeds in pulling the viewers in.

Johnny Depp delivers a convincing portrayal of Whitey Bulger, an uncompromising crime-lord. Depp’s look consists of blue contacts, dyed hair, and his well-crafted persona. His dominating brow and penetrating eyes complete the intimidating image of a man who means business. Depp’s role exposes his maturity in a serious manner that is unseen in many of his comedic roles.

The unceremonious fashion in which Bulger sheds blood instills fear and establishes his authority.

Bulger escalates from intimidating to creepy to outright nauseating. He goes from hugging an elderly neighbor to strangling his friend’s stepdaughter. How does he go so long without being incarcerated? A morally misguided friend in the FBI is covering his tracks.

The intrigue layers on as the cases pile up. John Connolly (Joel Edgerton), the FBI agent in cahoots with Whitey Bulger, seems to be digging himself deeper and deeper into a hole. The line blurs between the righteous and the criminal. Is it worth overlooking the misdeeds of a rising mobster to take down the mafia?

In the brutal men’s work, women suffer from morality. Connolly’s wife is deeply disturbed after watching her husband lose sight of what’s right. Dealings with her — especially a memorable moment when Whitey Bulger runs his hands over her face, much to the audience’s cringing — are some of the most riveting of the movie.

Even though “Black Mass” is based on a true story, it is hardly glamorized. The producers did not capitalize on the intensity of the situation by over-dramatizing it.

All of the acting was stellar.

It’s the people who really drive a story, and in the case of Whitey Bulger, there is no shortage of character. What’s more, these complex characters are based on real living people.

The life of a mobster is hard for many to envision. “Black Mass” reveals much of what it entails, and though we shudder to recall that this man is murdering friends in cold blood, we also see his compassion for his select friends and family.

By virtue of it being true, “Black Mass” is as much a crime movie as a tragedy. The untimely and preventable death of his son tears Whitey Bulger apart in a way that relegates him to a mere mortal. After spending so much time repulsed by him, the audience cannot help sympathizing at certain moments.

Unquestionably real and unforgettably tense, “Black Mass” is another depiction of a larger-than-life villain, only this time, he’s real.