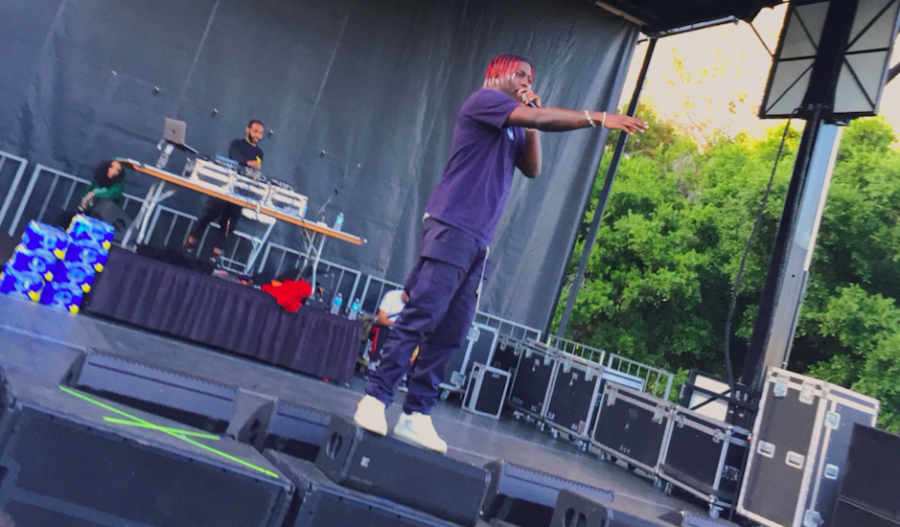 Lil Yachty gets on stage to perform during Blackfest.

To be immersed in a new culture under the warm sun while enjoying live performances usually does not come without a cost in the Bay Area. However, it happened last Saturday, May 4, with Blackfest.

Blackfest is a celebration of African American culture held annually at Stanford University in Palo Alto, California. The event welcomed everyone from various ethnic backgrounds with open arms and helped them unite under African American music and art.

“This event made my year. Everyone was so happy and just being there felt so uplifting and eye-opening,” said Sarah Bartlett, a senior from a local high school.

Stanford University’s Black Family Gathering Committee is responsible for organizing this event.  The committee is made up of students who share a common passion for black art, music, and culture. They work through the festival to spread these values within the university every year.

Along with clothing, food, and fashion shows, there were also multiple performances from both student and Grammy-nominated artists.

“I was really excited for the opportunity to have fun with my friends while also educating myself and celebrating black art, music, and culture,” said Maya Stern, a junior from Menlo.

As the evening progressed, live dancers came to the stage, followed by several speeches.

“They had some dancers and clubs from Stanford perform,” said Katherine Williams, a junior at Woodside. “The overall vibe of the event [was one of] togetherness and acceptance.”

Despite the positive, loving energy that characterized the event, racist remarks were overheard by some of the festival goers.

“I noticed white people saying derogatory terms, and I was surprised that [there would be people] at an event in celebration of black culture that would say these things,” Williams said.

Unfortunately, the attendees were not unfamiliar with this type of discrimination.

“I guess black people are seen as a threat sometimes,” said Marcos Jose, a senior at the event. “Racism is commonly taught in families, which is really sad to see.”

However, the show still went on. The entire crowd came together and roared in glee as Grammy-nominated artist Lil Yachty hit the stage.

The crowd’s shared love for music overpowered the judgment of others.

“My favorite part of Lil Yachty’s performance was when he sang ‘I spy’ since the crowd got really hyped, which I especially felt while in the middle of the mosh pit,” Stern said. “The excitement gave me the feeling that everyone there was passionate and excited about the event and everything it stood for.”

Blackfest works to acknowledge the art produced by a race that has faced marginalization and prejudice throughout history. Ultimately, this year’s festival created a celebratory call for equality in modern society.

“This festival represented a mutual, communal, and societal realization that the strengths of African Americans deserve just as much recognition and celebration as those of any other race,” Stern said.