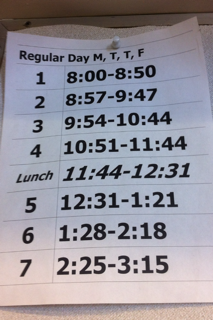 The current regular-day schedule at Carlmont

Following the temporary block schedule brought on by the Smarter Balance testing on April 28 and 29, many Carlmont students have began pondering the idea of a permanent block schedule.

Sophomore Sage Shamsai said, “I think block schedule is good because it gives you more time to absorb the information. You have more time to do the homework and understand the material [as opposed] to rushing through it.”

Sophomore Isabelle de Wood said, “I like it because I get less homework every night which means less stress. Having more leeway time is really important to me.”

But unlike Shamsai and de Wood, some students do not like the idea of a block schedule becoming a permanent change for Carlmont.

Junior Brittany Zelnik said, “I don’t like it because I’ve been used to going to six classes every single day and I don’t like not going to every single one. I don’t see my teachers so it’s hard to keep up with the homework.”

Sophomore Jay Russell said, “I hate it. It gets boring being in class for 90 minutes and the days feel longer. And without being in class every day I [would] procrastinate a lot more.”

The idea of a block schedule has become a very controversial topic around Carlmont, and students have constantly questioned whether or not it will be enforced permanently.

Instructional Vice Principal Ralph Crame said, “Block scheduling is a topic that a lot of teachers bring up on a regular basis. It has to go through the process of governance council, department chair… so the entire school has to come to an agreement before [it] gets implemented.”

Other schools in the Sequoia Union High School District, for example Menlo Atherton and Sequoia, recently switched to a block schedule, making the fate of Carlmont almost inevitable over the next decade.

But Crame said there will be no change in scheduling for Carlmont High School, at least not in the 2014-2015 school year, much to the approval of Russell and Zelnik.

Though Carlmont’s block schedule during testing days was short-lived, it has the potential to reappear and create a lot of controversy over the next few years.