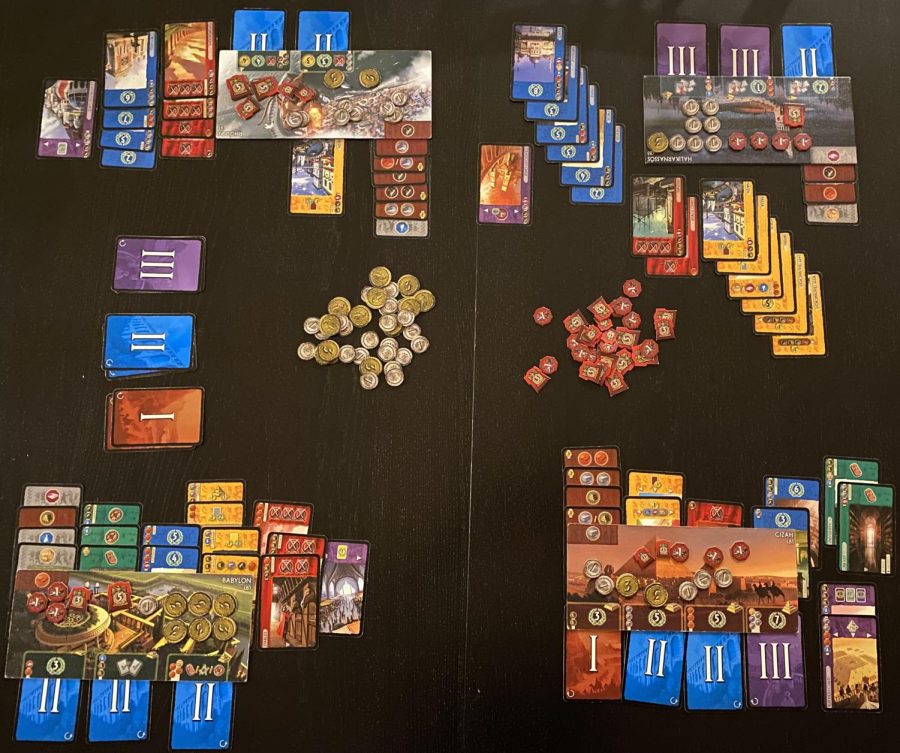 Players get the opportunity to build one of the seven wonders of the world, and it only takes 30 minutes to construct it.

This week, we will take a look at 7 Wonders, a classic board game. Throughout three ages, players will strategically select cards from their hands to score more points than their opponents. All the cards will help players score points, but each type of card, marked by different background colors, scores differently. Without further ado, let’s take a look at how to play and why this game is considered a classic.
How to Play
Each player has one of seven possible wonder boards.  The players will also need to sort through the cards and remove any cards labeled for higher player counts. Each player will also receive three gold. Now the game is ready to begin.

The game takes place over three ages. At the start of each age, players will be dealt seven cards from the corresponding deck. For each round of the game, players will look at the cards in their hand. They can choose one card to keep and pass the rest of the cards to the next player. The passing is clockwise in the first and third ages and counterclockwise in the second age. Before looking at the next hand, players will simultaneously do one of three things with the card they selected.

A player can place the card face up in front of them as long as they can afford it. Brown and gray, provide the player with resources. These cards are usually free or require some gold to get.

Some cards in the first and second ages chain to cards in the next age, meaning they can build those cards for free. The cards that chain are shown on both cards that are part of it.

Construct a Stage of your Wonder

A player can place the card face-down under the next stage of their wonder. Instead of paying the cost on the card, they need to pay the price for that wonder stage, marked on the wonder board. Since the card is placed face down, players should choose cards they don’t want an opponent to get for their wonder stages. Another good time to build a wonder stage is when you don’t want to build any of the cards in your hand.

A player can also discard a card for three gold. This option should be taken sparingly since it gives fewer points than the other options.  However, it does provide the player with more flexibility for the next set of cards.

End of the Game

Players continue this process until they have two cards left. Instead of passing the last card to the next player, they place it in the discard pile.

Then, the next age begins. Each age follows the same rules. At the end of the third age, the player with the most points wins.

Civilian (Blue) – Each of these cards is worth some points.  Cards that are worth more points come in the later ages and cost more resources.

Military (Red) – Each military card gives a player 1-3 strength based on the age. At the end of each age, players compare their strength with their neighbors. The player with more symbols from these cards gets one, three, or five points depending on the age. The player with fewer symbols loses one point.

Trade (Yellow) – In the third age, these cards will give gold and points for each wonder stage or particular card type that the player has.

Science (Green) – There are three different science symbols. Science cards score in two ways. First, each set of the three symbols is worth seven points. Second, for each different symbol, square the number of symbols you have of that type.

Guilds (Purple) – Some of these cards are randomly selected and added in the third age to replace resource cards. These cards score points based on how many times your neighbors meet a certain condition, such as one point for each blue card they have built.

Gold – Every three gold you have at the end of the game is worth 1 point.

Wonder – Some stages of your wonder may give you points.
Final Thoughts
7 Wonders is a stunning game. I highly recommend that you get yourself a copy of it. The game comes with a lot of scoring sheets, but I’ve played this game so many times that I ran out and had to find an online copy.

Furthermore, the game scales well at the different player counts. One reason for this is that each player plays their card at the same time. Unlike most games where adding a player makes the game take longer, a 7-player game takes the same amount of time to play as a 3-player game.

One of the downsides of the game is that it is sometimes hard to learn because there are so many different kinds of cards, and there are some minor rules, like chaining. It usually takes a couple of practice games before one figures out how to play decently.

However, even if it takes a few plays to get the hang of the game, you’ll want to play again because the experience is different each time. The three factors that contribute to this are having seven double-sided wonder boards, different card ratios at each player count, and the luck of the shuffle.

The shuffle impacts the game a lot because it determines which cards are in the same hand. When you get a hand of cards, you only get to select one. Cards that appear in the same hand cannot all be built by the same player. One part of the game I find fascinating is how you can sometimes get a hand where it’s obvious which card is the best and sometimes get a hand that is entirely good or bad. The different combinations are the primary reason why the game is replayable. While one may argue that this adds a lot of luck in the game, I’ve found through many plays that one’s strategy will have a more significant impact on the game than the shuffle.

Each card is marked with a number to show when it is used. When adding another player, seven cards are added to each age. These cards change the dynamic of the game because the ratio of the card types is different. For example, 4-player and 7-player games will have the same number of brown resource cards during age two. Therefore, resources will be more abundant in a 4-player game and harder to get in a 7-player game. There are also patterns with the other card types.

The wonder boards also impact the way you play the game. Each board has an A-side and a B-side. The A-sides of each board are similar, consisting of two victory point stages and a unique ability for the second stage. The B-sides of each board are significantly different. These sides feature more special powers and fewer victory points. Both sides of the boards are equally powerful since the additional special abilities on the B-side come at the expense of points. Also, the costs for the wonder stages are different on each board.  Having different wonders allows players to have a new experience each time they play.  Playing with the same wonder board multiple times enables a player to learn the strategies to win with that board.

After playing the game many times, I’ve found that the game is more than just a point salad (yes, that is an actual board game term meaning everything you can do gives you points). The game is also an economic game since you will need lots of resources to afford cards in the third age. It’s costly to get a ton of resource cards since they don’t score. Instead, you have to figure out which resources are worth getting. You want to get resources you need that other players will also pay you to use. You will want to make sure you have access to all the resources. If neither you nor any of your neighbors get a specific resource, there are a lot of cards you cannot build.

In summary, 7 Wonders is a classic board game because it popularized the drafting mechanism. While it wasn’t the first game to involve selecting a card and passing, many games published afterward have adopted the mechanism for small and large parts of their game. 7 Wonders can usually be found in stores and online for $35-50. Overall, I would give this game a 9 out of 10 because of its classic drafting mechanism, scaling for 3-7 players, and the variety of wonder boards that add replayability.