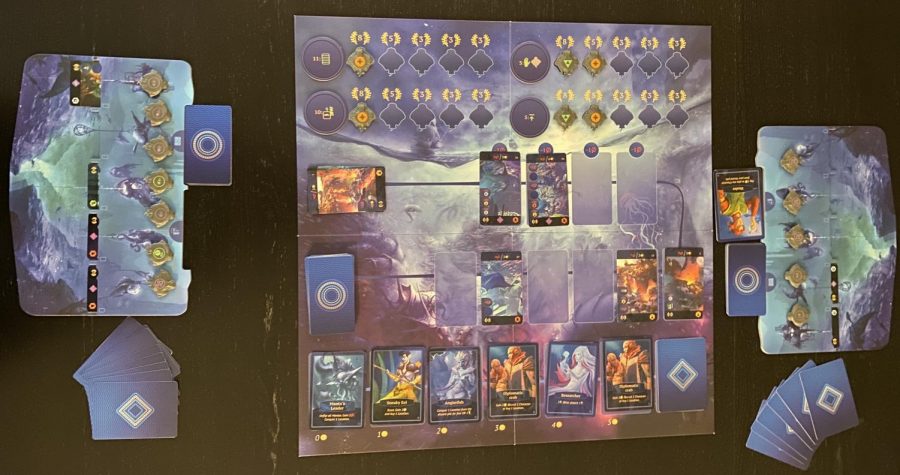 Aquatica is a unique engine-building and puzzle game designed by Ivan Tuzovsky and published by Arcane Wonders and Cosmodrome Games.

You’re a powerful ocean king, so it’s your job to capture locations, recruit ocean creatures, and get past the depths to bring glory and prosperity to your civilization.

Aquatica is an engine-building game where players will play a character card on their turn and do what that character tells them to do, eventually playing a character that lets players pick up all their character cards. Many characters will allow players to conquer or buy locations, providing players with additional resources and actions to take on their turn through a unique mechanism of sliding cards up to get various rewards.

Although Aquatica isn’t a complex game, I’m only going to explain the main aspects of the game to give you an overview of how the game works. Then, I’ll tell you why I did that and proceed to my final thoughts.

Players start the game with six character cards in their hand. Every turn, they will play one of them and follow the text on the card they play. These cards can do various things, such as conquering a location, recruiting another character card, or scoring cards for victory points.

There are no tokens or track to keep track of resources. Instead, players must accumulate and use all their resources when they need to use them. The character card played will often give the player some strength to conquer a location or some money to buy a location. Another way to get resources, which I will explain later, is to push up an appropriate location card on your player board. The last way to accumulate resources is by flipping a manta ray.

Once a player uses the necessary resources to get a location card, they must place it on an empty space on their player board. They slide the card up into the slot so that the topmost reward on the left side of the card is visible.

Another action that some character cards tell players to do is scouting. This action is important because location cards that players take are not immediately replenished. When a player is told to scout, they have to move four of the remaining cards down to a second row where they require one less strength to conquer. Any extra cards are discarded, and new locations are revealed and placed in the main row. During subsequent scout actions, the cards from the second row are first placed in the discard pile.

Some cards will allow players to push up locations on their player board or score locations. Characters that tell players to rise locations have a green arrow symbol in their text. To rise a location, players must push a location card on their player board up one level so that the symbol below the topmost, visible one is now the highest visible symbol. Some cards are marked with a green arrow pointing towards a green line, which means that a player gets to push the card all the way up, so all the symbols on the left column are hidden.

If there are no more visible symbols on a card, then it has fully risen. First, players check the bottom of the card to see if it rewards the player with a wild manta. In the future, if a player needs to score a card, they can remove this card from their player board and put it in their stack of scored cards. Scored cards are the victory points in the bottom left corner.

The last thing that some characters will tell players to do is to recruit a character. At the bottom of the game board, there are six characters face-up from the character deck. These characters have several abilities from the list above, and they each have a different cost from zero to five coins that players must pay to recruit them. After recruiting a character, all the character cards slide to the left, becoming cheaper, and a new character card is revealed from the deck. Recruited characters are added to a player’s hand.

At some point, players will not have any useful character cards left in their hand, so they will have to play the Matrona card. This card allows a player to return all the characters from their discard pile to their hand and un-flip all their manta rays.

So what are the manta rays? Each player starts the game with four manta rays of their color. During a player’s turn, players can flip a manta ray to get the reward on it. Some manta rays provide coins or strength that can be used when a player needs that resource. Other manta rays give players the ability to push up locations.

Before and after playing a character card, players can also do actions on their location cards. When a player uses resources on a location card, they move that card up one level, so the level below the one they use is visible. Besides resources, there are a variety of other symbols that can be present. These symbols may allow players to push up or score other location cards, recruit a character for free, or retrieve a card from the player’s discard pile. When players use these abilities, they also push the card up to the next level, just like using resources. Pushing cards up is an essential ability because doing so allows players to score cards more quickly and because some cards have blocked spots that can only be passed through a rise action.

In addition to scoring location cards to get points, many points also come from goals. Four goals are printed onto the board, and there are a few goal tokens that can also be used for replayability. Whenever a player completes a goal, they put one of their starting manta rays on the next available space. Finishing a goal first gives a player more points.

The game ends when a player achieves all four goals, the location deck runs out, or the recruitment deck runs out. After the current turn, all players get one final turn before adding up points. Players get points from goals, scored location cards, and one point for each character card in their hand.

One advanced variant that exists is the king cards. These cards are drafted by the players at the start of the game and give players a powerful, unique character card that only they will have.

Before I get into the actual game, I want to explain how bad the rulebook is. I understand that the rules have to explain something completely new that’s never been seen before, but they are still unorganized and lack examples. They overuse the words “action” and “effects” and make them have multiple meanings. Because of many unclear rules, I could not explain how the game’s various aspects work together too much.

In the first Aquatica game I played, it was normal to have rule questions. However, these questions continued to persist among numerous games. The big problem was that the rulebook did not answer these questions, and I had to look up the answers sometimes to no avail of finding an answer from the game designer. Even if the answer to a question is in the rulebook, it isn’t clear where to look because there isn’t a good organizational structure. I also had issues with the lack of clarification for some goal tokens and what to do if multiple players achieve a goal at the same time. It’s alarming that these problems are present in the second printing of the game, and I really hope they rewrite all the rules if they make a third edition, because the rest of this game is lots of fun.

The central mechanism in Aquatica is engine-building with character cards. This mechanism reminds me of Concordia and how players have many essential cards to perform all the actions in the game, such as conquering, buying, scouting, recruiting, and scoring. The recruiting part of the game is quite interesting because many different, special character cards do interesting things and help with the various goals.

Note that the goals are an essential part of the game since they are what players shoot for to get a large number of points. Aquatica is also a race, so players have to be efficient. They will likely only go through their character cards two times during the game, and that is something players should be aware of.

The big problem with the goals tokens is that there are not enough of them. There are five double-sided goal tokens, and four of them are used in each game. Even though this was done to create more replayability, there aren’t enough goals to achieve this. The game has a lot going on in it and has the potential for hundreds of goals, so I really hope they add more goals in future expansions or printings of the game.

The second primary mechanism in the game is the unique idea of pushing cards up and getting different rewards. This provides an interesting way to collect resources. However, my favorite part of this mechanism is that there are blocked depths that players have to use the rise ability on to get past. It is also an interesting process to score a card, consisting of playing a character card, getting a location card, pushing the card all the way up, and then scoring the card. The small benefits of the manta rays are a good bonus and thematic. They prove to be useful when players attempt to chain a lot of abilities together. I always like seeing a game that does something new; Aquatica does this with the mechanism of rising cards, and it does it well.

The manta rays are my favorite component in the game. They are high-quality and easy to read. My next favorite component is the insert that comes in the game that neatly fits all the cards, manta rays, and goals. While the location cards and character cards don’t look high quality, and players will be sliding the cards in and out of the player boards, the cards have not worn out too much. The artwork on the cards and the insert are amazing.

The last mechanical things I want to mention are the king cards. I expected the king cards to be a 7th starting card that provides a special ability that only you get to use. However, I was disappointed that there were only eight kings, and three of them were returned to the box after being used. It’s also questionable whether all the kings are balanced, but they are definitely not equally easy to play. It feels that there wasn’t a lot of playtesting with the kings, or they were an incomplete idea. I would definitely like to see the publishers do more with the kings, notably by adding more of them, to future expansions or versions of the game.

I keep mentioning future expansions because the game already has one expansion that adds a 5th player and other mechanisms. Aquatica has the potential to be a 10 out of 10 game with its good engine-building and unique, puzzle-like chaining mechanisms. However, I have to dock at least one point for the terrible rulebook and another point for not providing enough goals and kings to the game, which drops the game to an 8 out of 10. I still recommend buying Aquatica if you like short games that feel like a spring, building, or puzzles, but you should be aware of some of the shortcomings in this game.