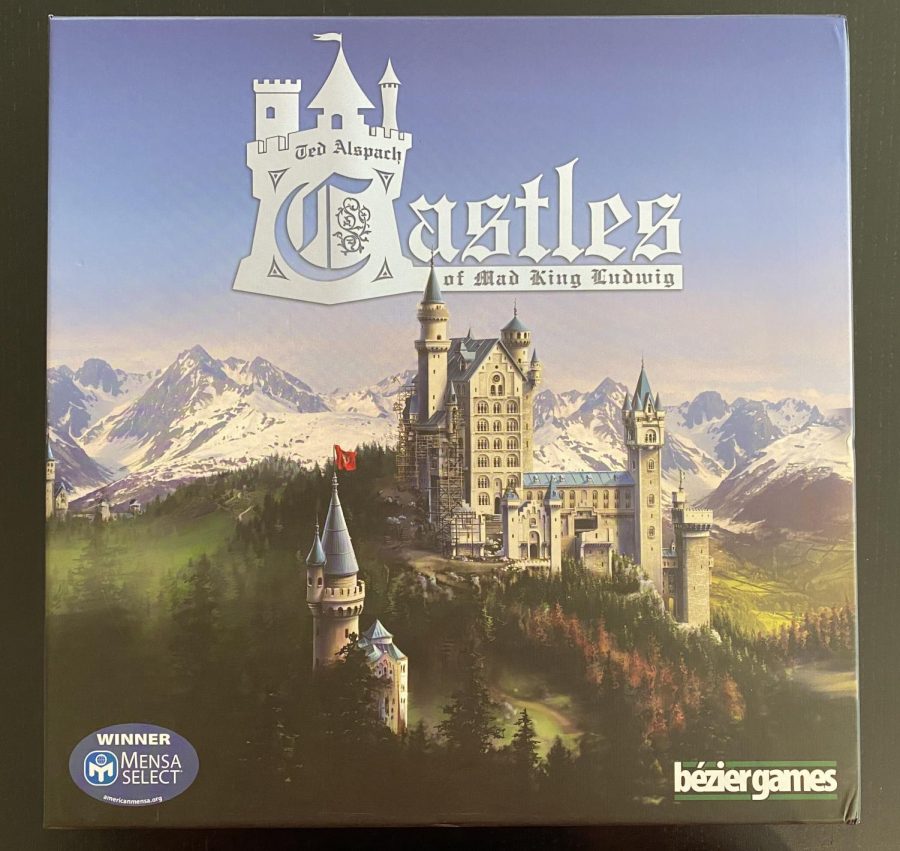 The box cover for Castles of Mad King Ludwig illustrates the quality of artwork within the game.

Mad King Ludwig has tasked you with building the most extravagant castle ever. However, this task comes with a twist: not only must you build your castle one room at a time, but you’ll also have to sell rooms to other players to deal with your tight budget.

Designer Ted Alspach and publisher Bezier Games also worked on a similar game, Suburbia. I gave it a 5 out of 10 because of its lucky tile pricing system, all or nothing private goals, and single strategy to victory. Castles of Mad King Ludwig gave me hope when I got it because it addressed all of these issues. Let’s see how well it does.
How to Play
Each player’s castle starts as just a foyer. You can actually flip the foyer tiles based on whether your table allows you to build toward the center or away from the center. Four pieces of a game board and scoring track have markings where room tiles, markers, cards, and other components should go. You’ll take out a certain number of rooms for each shape and size based on how many players you have. A subset of the room cards is shuffled, and some cards are revealed then discarded to determine which rooms start in the contract row.

There are also spaces to place one King’s Favor tile for each player. Each of these tiles depicts a different goal; players will get endgame points based on how they finish in these criteria compared to other players. Each player receives three utility cards, which show individual goals for that player. Players keep two of the cards and put one under the utility card deck.

When you purchase a tile, you must place it so that at least one doorway from your castle connects to the new tile without overlapping. You will get points for the value of the tile. Then, check the center icon of the tile. The center icon of a tile usually gives bonus points if a room is connected to another room of a specific type via doorways on two adjacent tiles. However, activity rooms will provide you with negative points if the activity room touches the wall or doorway of any of the listed room types. The room you add may trigger the scoring bonus of an adjacent room, so make sure you check their center icons too.

If you connect all the doorways in a room with doorways to other rooms, you have completed that room. You may have doorways for a room connect with the wall to another room, but it will never be completed. When you complete a room, you will get a bonus based on what kind of room you completed.

The master builder passes the master builder token to the next player after their turn. 1,000 coins are added to each remaining room in the contract row, and new rooms from the room deck determine what room sizes refill the row. When the last card of the room deck is drawn, the deck is shuffled to finish filling the contract row, and players finish that round before adding up their points.

During the game, players accumulated points through the rooms in their castle. Now, they will score points based on how well they did with the King’s Favors. If any stack of room tiles empties, including the hallways and stairs, players will get two points for each room they have from one of those stacks. Players also score points for their utility cards and get one point for every 10,000 coins they have. The player with the most points is the winner.
Final Thoughts
Castles of Mad King Ludwig delivers a fantastic experience with great mechanisms. In every area where Suburbia had a fault, this game excels.

Let’s start with the scoring and strategy. In Suburbia, you had to work on your income first and then increase your reputation to score points. Ted Alspach does a much better job with scoring in Castles of Mad King Ludwig because it’s a point salad. This means that everything you do will give you some points, but you need to figure out what the best move is. However, it’s not just about which room and where to put it; you also have to consider your public and personal objectives. Furthermore, the best tile is more often than not priced very high, which brings me to my next point about money.

Money is an extremely tight resource in the game; you always have so little and want to get more. Suburbia had a flaw where the richest players could buy better tiles, which increased their income, reputation, and wealth. On the contrary, Castles of Mad King Ludwig gives each player an equal opportunity to make money. When you are the master builder, you have to price the tiles intelligently so you make the most money but still get the room you want. I really enjoy the decisions concerning how the master builder prices the tiles. And if you aren’t the master builder, you don’t have downtime because you are figuring out which tiles you want and how much you’re willing to pay for them. Ultimately, the way this game utilizes money is a mechanism I’ve never seen before.

I always like games that have a lot of replayability. Castles of Mad King Ludwig has some replayability. You don’t see all the tiles each game, and the King’s Favors will change from game to game, increasing the demand for different rooms. Where the King’s Favors have players competing against each other, your utility cards only regard you. Suburbia’s private goals required you to get the most of something when nobody else knew what that was. In this game, it doesn’t matter if someone gets a room that qualifies for one of your utility cards because you can still score points for whatever you end up getting. With the numerous ways to score points, your cards may not always be the best way to earn points.

Lastly, I like the art for the game. The components are well made. It’s easy to tell the room types from each other, and there are symbols for colorblind players to use. The money is good quality and so are the cards, although the cards are on the smaller side. My only comment about the components is there are so many that the game takes a while to set up and clean up.

Overall, Castles of Mad King Ludwig is a fantastic game. It scales well for 2-4 players, although the game length will increase with more players. The box does say 90 minutes, and I find that most games finish earlier once you know how to play. It’s not a challenging game to learn or teach, but I wouldn’t recommend playing this with someone who’s never played a board game before, for this is a heavier weight game.