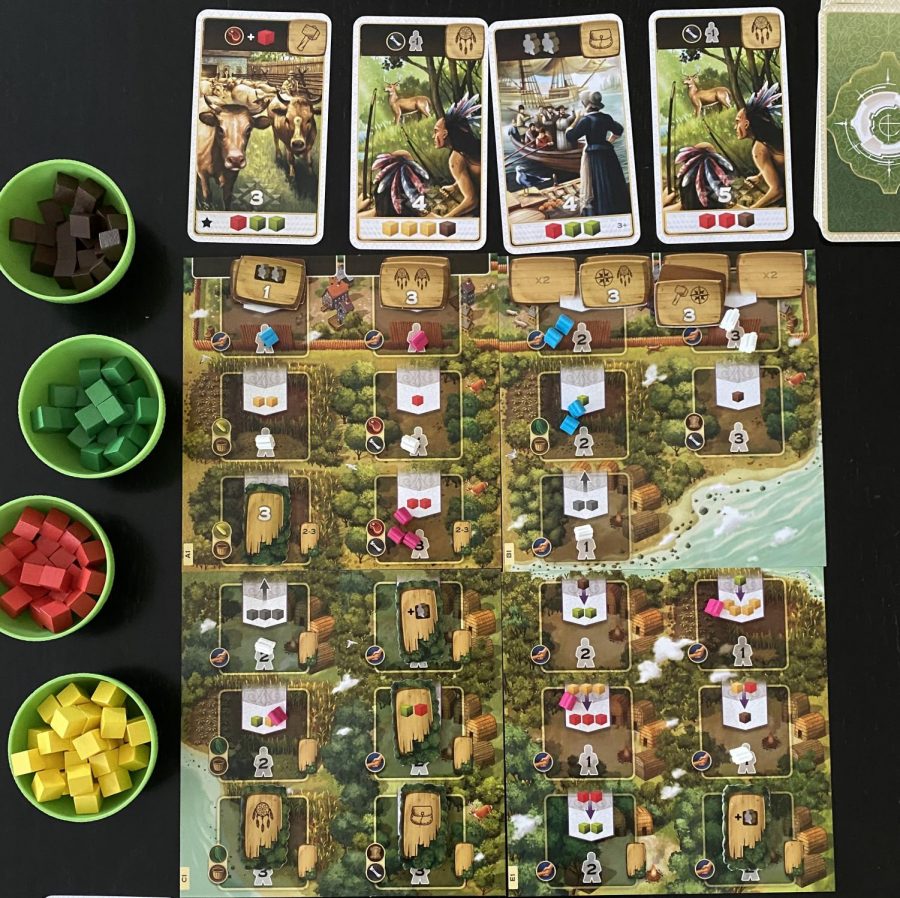 Century A New World is the third game in the Century trilogy, designed by Emerson Matsuuchi. Two to four players can play this set collection game in 30-45 minutes.

This week, we will be diving into the third game in the Century series, Century A New World. The objective in all three games is to collect different spices and resources, represented by different cube colors, and trade them for point cards. In Century Spice Road, players collect their cubes by creating a hand of trade cards. In Century Eastern Wonders, players meet the same objective by moving their boat to different tiles with certain trades.

In Century A New World, players achieve their goal by placing workers at various locations that let them take cubes, trade cubes, and buy point cards. The point cards in Century A New World also have special abilities and symbols, and there are bonus tiles players can collect that reward them for having certain sets of symbols.

All three games can stand alone; you do not need to know one of them to play the others. However, the games can be combined to create up to seven possible games. For this review, I will only concentrate on Century A New World and save the combination games for another review.
How to Play
The game board is made of four square pieces put together. The board has a variety of smaller squares on it that display actions, the number of workers players must place there to use it, and some additional icons that have to do with special abilities players can earn. At the start of the game, some actions are blocked by an exploration marker that must be removed before the action can be used. Each player has a player board where they will place their initial six workers, store up to 10 cubes, and collect up to three bonus tiles.

On a player’s turn, they must place workers from their player board onto an action space on the game board and then take that action. When placing workers in an empty area, the player places the number of workers shown on the space. If another player already has workers in the area you want to go to, you have to place one more worker than they have there; the other player returns their workers from that space to their player board.

Now, the active player takes the action of the space on which they placed their workers. Spaces that only depict cubes simply let the player take those cubes from the supply and add them to their player board. A few spaces show gray cubes and arrows pointing up. The actions here let players upgrade cubes from their supply for every gray cube shown. Upgrading a cube means that a player returns a cube from their player board and takes the cube that is one level higher. Yellow cubes turn into red cubes, which turn into green cubes, which turn into brown cubes. The last type of action regarding cube types is trading. These spaces have two rows of cubes with a down arrow between them, marking which way the trade goes. Players spend the cubes at the base of the arrow to get the cubes at the tip of the arrow. Players may make the trade as many times as they want and have cubes to do so.

At the top of the board, there are four action spaces that have a point card next to them, along with one or two stacks of bonus tiles. When a player places workers on any of those spaces, they must buy the corresponding point card, take a bonus tile from that space, or do both. To buy a point card, the player must spend the cubes shown on it. Point cards have a number above its cube cost, which is the number of points it provides. Furthermore, point cards have an icon in the top left corner and a special ability on the top.

Four types of symbols can appear on the point cards, and each one has its own type of ability. Cards with a hammer icon give players an extra cube of a certain type when they go to an action space with the depicted icon. The dreamcatcher symbol reduces the number of workers the player needs to go to spaces with a denoted icon. Taking a point card with the purse icon immediately gives the player additional workers. Lastly, cards with the compass icon immediately let the player open up a new action space by removing an exploration token of their choice from the board and receiving its reward. These rewards range from additional symbols to free cubes.

During the game, players can take up to three bonus tiles from the top spaces of the board when taking an action there. These bonus tiles reward players with points for getting sets of certain symbols. There are a few other bonus tiles that give a set number of points or points for the number of workers you have.

As players take turns, they may run out of workers. Instead of taking an action, players can rest by returning all their workers from the board to their reserve.

Players will continue to play until one player gets their eighth point card. At that point, players finish the current round and then add up their points. Players get points for their point cards, bonus tiles, and a single point for each non-yellow cube they have in their reserve.
Final Thoughts
First of all, let me say that this is a great game. What really surprised me the most about it was how they found another unique and simple way to keep up this simple set collection mechanism, where you get cubes and turn them into other colored cubes to get points. The worker placement mechanism in Century A New World makes it feel different than either of the previous Century games; it has more interaction and less of an engine-building feel. In addition, the point cards usually only have three cubes on them, so the game is more fast-paced than the previous games, since you can get a point card in just a few turns.

As I mentioned before, this is the third game in the Century series. People who are just entering the series may want to know which game is best to get first, and people who already have one or both of the previous games will want to know whether to pick this one up too. I’ll answer these questions and examine how this game fits into the series.

If you are entering the series, I mentioned in my Century Eastern Wonders review that Century Spice Road was the best entry point since it was very simple and easy to teach. Century Eastern Wonders added more rules that made the game a little harder to figure out, and if you learned that first, you would then play Century Spice Road and notice that it is so much simpler. In my opinion, Century A New World is easier to teach than Century Spice Road because all the actions revolve around worker placement and worker management mechanisms. Taking cubes and getting point cards are both done by placing your workers on certain spaces. There isn’t really much going on with the rules of the game, but there is a lot more going on in the strategy of the game.

Getting Century A New World first will not cause any rule confusion, but it could be a difficult game to learn how to play well if you don’t already play a lot of games. Century Spice Road has a single strategy and sees how well players do with that strategy. Century Eastern Wonders added a few additional ways to get points from the trading posts and upgrade tiles. Meanwhile, Century A New World has bonus tiles that give a new way to get points as well as special abilities on every point card that complicate the game.

There is one set collection mechanism to get the point cards, but there is another set collection mechanism in getting the right set of point cards to score points for the bonus tiles. You also can’t forget about the abilities on the point cards and how many points they are worth. For me, I really like the concept of sets within sets and all the special abilities. I can’t decide whether I like Century Spice Road or Century Eastern Wonders better, but it is clear to me that I like Century A New World the best in this series. This game also had many similar aspects to Century Eastern Wonders but is better, so I also would say that this game knocks Century Eastern Wonders down a bit. Overall, the Century series does a really good job with having three games that transition really well from a straightforward game to a much deeper game with lots of intricacies.

When looking at the complexity of Century A New World, I think the verdict for how to enter the Century series has to do with how much experience you have playing board games. If you are new to the hobby, then I would definitely recommend starting at Century Spice Road. If you play a lot of games with special abilities and multiple scoring mechanisms or are looking for something closer to a medium-weight game, then I think the best game to start with is Century A New World.

Now it’s time to answer the question regarding what to do if you have the first two games in the series and are debating whether you should get this one. I’ll start with the only downside to getting the third game, which is that you now have three games that do the same thing in slightly different ways. The issue here is that the games start to step on each other a little bit. In my opinion, Century Spice Road matches the simplicity of Century Eastern Wonders, and the complexity of Century A New World overshadows the special abilities and alternate scoring methods in Century Eastern Wonders.

From a price or value standpoint, Century Eastern Wonders is worth four games. Once you have all three games, you actually have seven games you can play by mixing and matching the combinations. That’s probably the biggest point in picking up the third game in the series: you can make a bigger game out of three smaller ones, a very cool idea from the designer and publisher. The only issue I’ve found with the idea of combination games that I didn’t see in Century Eastern Wonders is that I have to sort through the components each time I play since there are different point cards, bonus tiles, and board segments for each of the possible combinations.

Ultimately, I only have a few minor negatives about the game, and the rest of my thoughts are all positive. I already said that this is my personal favorite of the three Century games, but they are all still close, so Century A New World will get the same rating as the other two games at an 8.5 out of 10.