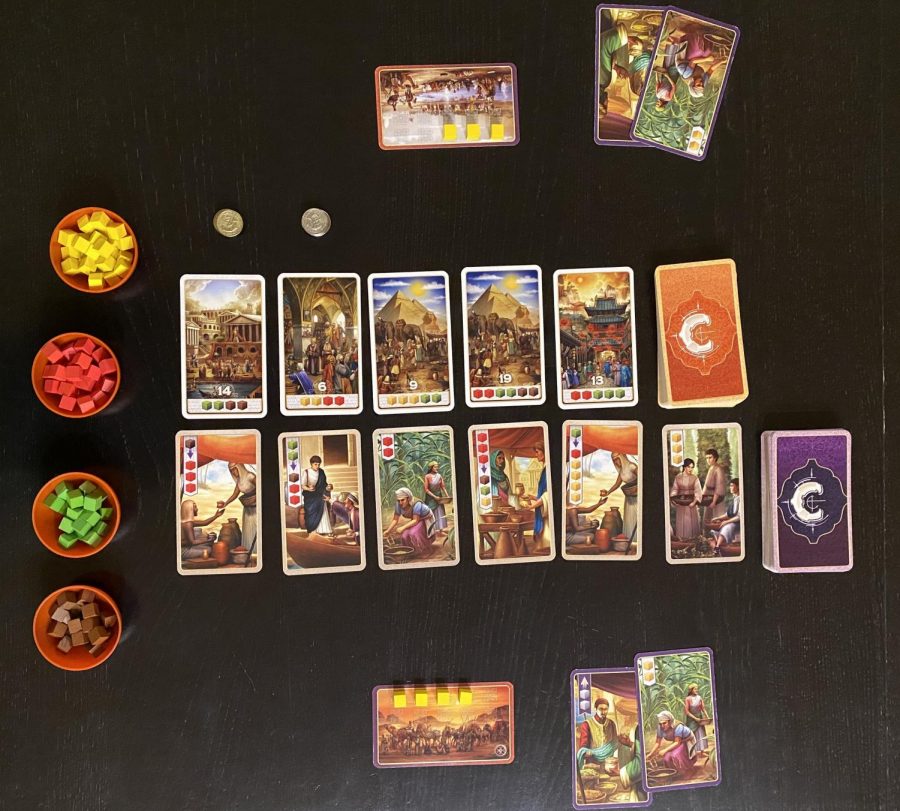 This photo displays the various game components and how the game is set up.

Many board game designs struggle by adding extra rules or a special dilemma to make playing harder. The additional strategy and amazement that those designers expect to get out of their unique product is sometimes lost by those barriers that challenge players.

Century Spice Road does the opposite; it uses simple ideas to make a clean game that anyone can play. During the games, players create a hand of cards to get, upgrade, and trade cubes, which represent spices. The goal of all that manipulation is to get a specific combination of spices, which you can exchange for point cards. Let’s take a look at Century Spice Road and see if it’s worth playing.
How to Play
Century Spice Road is set up with the orange point cards forming one row and the purple trading cards forming another row. There will also be a stack of gold and silver coins next to the two-point cards furthest from that deck. Each player gets a player mat and two starting cards. One starting card depicts two yellow cubes; the other is an upgrade card with two cubes and an arrow pointing up. The cubes are sorted by color and put in some very cool bowls provided with the game. Each player starts the game with some cubes based on turn order. On your turn, you will pick one of four possible actions.

When you choose to play a card, move the card you want to play from your hand to your discard pile. Then, take the effect of the card. Some cards depict only cubes, not arrows. When you play one of these cards, you take the illustrated cubes from the supply and add them to your player mat. Other cards show a set of cubes, then a down arrow, and then another set of cubes. These trade cards let you exchange the cubes above the arrow for the ones the arrow points to. You must fully pay the costs to execute the trade, but you may make that trade as many times as you can. The last type of card is the upgrade card, which shows some cubes and an up arrow through them. For each cube shown on an upgrade card, return a cube from your player mat and take a cube one level higher than it. Yellow cubes turn into red cubes, which turn into green cubes, which turn into brown cubes.

You’ll need more than your two starting cards to do well in Century Spice Road. You can spend your turn to take one of the face-up trade cards. To take a trade card, you have to put a cube from your player mat on each card in front of it. This frees the card furthest from the deck. To take the second furthest card from the deck, you need to drop a cube on the first one. To take the card next to the deck, you have to place a cube on all of the cards before it. When you take a trade card, you also take any cubes on that card. Afterward, add the acquired card to your hand, slide all the trade cards away from the deck, and refill the row.

At some point, you’ll run out of cards you can play and may not want to acquire any of the cards available. You can continue gathering and trading cubes again by taking a rest action. When you rest, pick up all the cards from your discard pile and add them to your hand.

The last possible action you can spend your turn on is the whole point of the game. You can take any of the face-up point cards by paying the resources shown on the card. If you take a point card next to a stack of coins, you also take one of the coins from that stack. After taking a point card, the remaining point cards slide away from the deck, and the row is refilled. You may keep your point cards hidden, but you may not hide how many you have. When one player gets their fifth or sixth point card, depending on player count, the current round is finished.

At the end of the round, all players add up the points on their points cards. In addition to those points, they get three points for each gold coin they have and one point for each silver coin they have. Each non-yellow cube on their player mat is worth one additional point. The player with the most points is the winner.
Final Thoughts
It’s a little surprising that Century Spice Road is popular. Turning cubes into other cubes is not thematic at all and seems like a boring set collection game. The cube components are a little boring, and the cards are way too big. However, the coins are neat, and I like the artwork. Let’s look into the game experience.

During each game, you definitely get to play with many well-designed mechanisms included by Emerson Matsuuchi, the game’s designer. Instead of drafting resources, Century Spice Road makes players build an engine to help them get point cards. Ultimately, the game is about how efficient you are in getting point cards and how much those point cards are worth. Considering both getting lots of cards to end the game and getting expensive cards worth a lot of points is an interesting balance that few efficiency-based games have.

When considering efficiency, it’s about how many actions it takes you to get a point card. Then, it’s about how many points you get per action. Playing cards is one action. Whenever you want to play cards again, you have to spend a turn to pick up all your cards. Acquiring cards is an interesting investment because it takes one action to get the card, but you can play it for action each time you rest.

Another thing I like about acquiring cards is that you can’t take whatever cards you want. You have restrictions on what cards are available and how far away the card you want is from the start of the line. Placing cubes on the cards you want to skip and getting all the cubes on the card you take makes up for slight imbalances in the cards. None of the game’s mechanisms, such as paying to skip cards, are new to Century Spice Road. However, the systematic combination of these mechanisms plus the set collection goal creates a unique game.

The point cards make sense mathematically, with a consistent formula for different combinations of cubes. There are interesting strategies about whether to go for lots of small point cards as fast as possible or to take time to get one worth a lot of points. The gold and silver coins are also interesting because they create competition to go for cards next to tokens. Sometimes, there’s even a race to get cards that are close to being near tokens in anticipation of their bonus points. On the engine-building side, there is a choice between making a small set of cards that give flexibility and acquiring cards, so you take rest actions less often.

I keep coming back to how neat the card collection in this game is. If you like engine-building, you’ll like Century Spice Road. Getting the combos to work isn’t easy; people who prefer puzzly games will likely enjoy this. If you like games that don’t have too many rules, you will definitely like this one; Century Spice Road is a very easy game to teach. The rules for acquiring and playing cards are picked up very easily. This is a game for all ages and experience levels. When I play with people who haven’t played games before, I don’t hesitate to pick this one.

The game claims it is for 2-5 players and plays well with all recommended player counts. I don’t mind playing this game at higher player counts because turns are usually pretty quick. Once everyone has a plan, their turns only take a few seconds, so it comes back to you before you know it. The total game length is about 30 minutes to an hour, so a little longer than the game suggests; however, you could technically adjust the game length by changing the number of point cards everyone needs.

I like replayable games, but Century Spice Road lacks in this category. There are interesting strategies to try out, but once you experiment a little, you won’t discover anything new; the game setup and play remain largely the same. However, the order the trade cards appear affects how players will build their engine, so I still find every game of Century Spice Road to be enjoyable, even multiple games in a row.

Century Spice Road was published in 2o17. Shockingly, the concept of this simple strategy game had not been designed many years earlier. Nevertheless, Century Spice Road deserves an 8.5 out of 10 because of its clean mechanisms, mathematically-sound calculations in point cards, and interesting engine-building strategies. Century Spice Road is a must-have game for gamers and non-gamers. You can get a copy for $30-45 online or at a local game store.