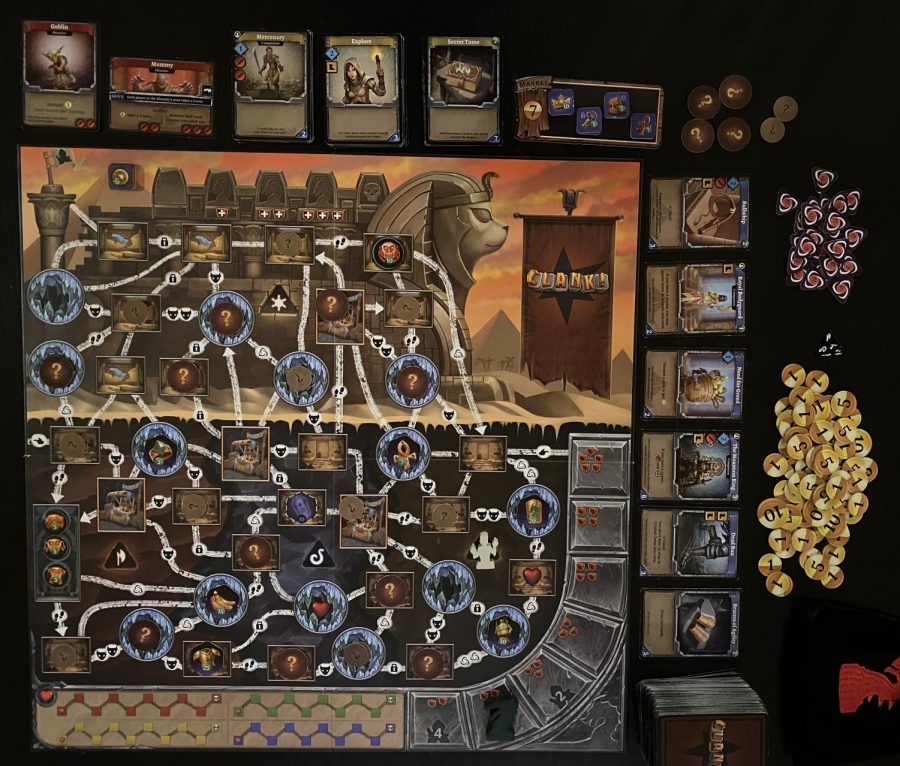 One of the new boards in Clank! The Mummy's Curse, set-up and ready to play.

After robbing artifacts and treasures from a dragon’s lair and an underwater dungeon, you’ve heard news of riches in the ancient pyramids. However, the pyramids are heavily guarded by a mummy, so you’ll need to be quiet and careful to steal as much as you can before the dragon can catch you or the mummy can curse you.

Clank! The Mummy’s Curse is the second expansion to Clank! A Deck-Building Adventure. This expansion adds a new double-sided board that features various additional rules and tokens. There are also new cards to add to the dungeon deck, a mummy that players can defeat during their turns, and curses that will give players negative points for taking shortcuts. Let’s take a look at what’s new to see how essential this expansion is to Clank!
How to Play
First, let’s take a look at the new board, which has two noticeable differences from the other boards. The first one is that some of the paths that you will travel on to get between rooms have some triangle icons on them. Whenever you move across these paths, you will take a curse token, worth negative two points, for each icon present. The second new feature of this board is that it is divided into four sections, each marked with a symbol in it. The entire aboveground region is one section and the depths of the dungeon are divided into the other three; these sections are important for the mummy.

The mummy starts the game in the section furthest from where players start. In addition, there is also a Mummy card that is placed next to the Goblin card in the supply. When a player is in the same section as the mummy, they can defeat the mummy with either two or three sword icons. If a player spends two sword icons, they get four gold and a curse, which is a net gain of two points and better than the Goblin. If a player spends three swords, they get to remove half of their curses, rounded up. After defeating the mummy, the player rolls the four-sided pyramid die and looks at which symbol is showing at the top of the die. If it shows a different section than the one the mummy is currently in, the mummy moves to that section, and all players in that section take a curse.

The last big thing that this expansion adds 40 new cards to the dungeon deck. These cards include regular cards to add to your deck, monsters to fight, and devices that players purchase for immediate one-time use. Many of these cards also have to do with the new mechanisms from this expansion. For instance, some cards will tell players to roll the pyramid die when it arrives or that a player takes a curse when they play a card or defeat a monster.
Final Thoughts

The fun in Clank comes from being able to do one or two big moves in the beginning and middle of the game. The tension at the end of the game can be ignored if you find a way to stop generating clank, and the end game takes too long and provides a big disadvantage to whoever gets out of the dungeon first.

The type of content that this expansion adds is on par with the first expansion, Clank: Sunken Treasures. Both expansions add a double-sided board with a cool theme and interesting mechanisms for those boards as well as some new cards that may or may not be compatible with the base game boards or other expansion boards.

One of my favorite parts of this expansion is all the small details. The new dragon piece to fit the theme and the wooden mummy tokens are very nice components and go well with the fantastic artwork on the board, cards, and tokens. Two flaws with the components are the major and minor secrets. Their function of rolling the pyramid die in addition to a benefit that has appeared in the base game is fine, but their back color does not match the color of tokens from the base game or first expansion. Because of this, it is possible to tell where these secrets are on the board, making them no longer a secret.

The new market item that gives players a heart is a nice addition that I include when playing on any Clank board. The board to place all market items on is also a nice plus because there wasn’t a place to put market items on in the base game. The other small component is the supreme monkey idol, worth 10 points. I like having this treasure on the map because it’s worth enough points to make players really want it. There could be a race between multiple players to get the supreme monkey idol or maybe one player goes out of their way to get it.

One of the main nuances to this expansion is the curses that players will get for going through certain tunnels. This is a pretty interesting idea because negative points can hurt a lot if you get too many curses. At first, it’s no big deal to get curses, but as time goes on, you don’t really want to keep getting more curses, especially if your opponents are trying to ignore the curses. They also did a good job placing the curses on the most important tunnels on the board, so players will want to go through the tunnels that give out curses.

The less interesting gimmick in this expansion is the mummy. Unlike the curses and the supreme monkey idol, the mummy doesn’t draw the player’s interest by affecting one’s score. Instead, it feels quite fiddly that a player who happens to be in the mummy’s section fights it. Then, the mummy moves to a random section, so another player who might be there can fight it. In all of my games, nobody chases after the mummy to fight it. Players only fight the mummy if it happens to show up in their section. When that happens, players will get a curse, which counteracts the extra benefit that fighting the mummy has over the goblin. The other problem with the mummy is that if everyone gets into the depths and the mummy moves to the aboveground section, the mummy is basically out of play until the end of the game. This can even happen with other sections in two-player games as well.

In summary, the point-driven curses and supreme monkey idol are a nice addition to the game along with the new market item and market board. However, the mummy isn’t impressive at all, many of the cards can only be played with this expansion’s board, and the secret tokens have a different color back. The cons significantly outweigh the pros for this expansion, so it is not essential at all. I would only recommend it for a small fraction of Clank fans who really want new boards and don’t really care about some of the downfalls in this expansion, so I am only going to give Clank! The Mummy’s Curse a 5.5 out of 10.