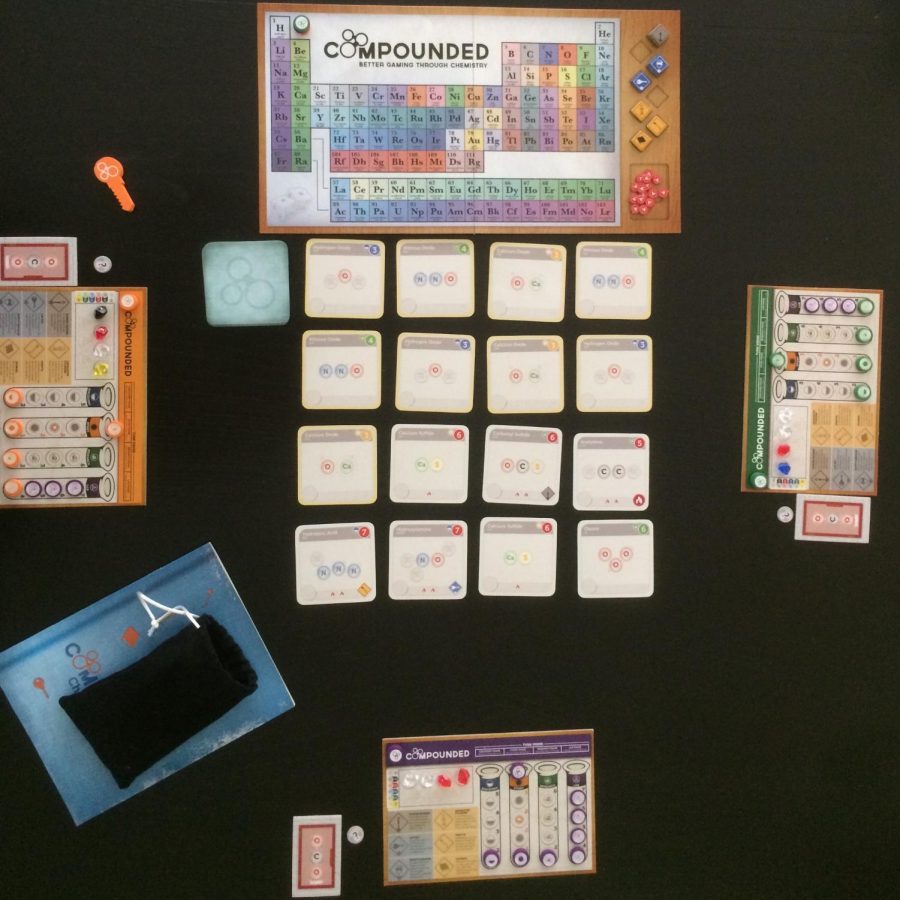 Compounded set up for three players.

Compounded is a game about trading elements and collecting the correct combination of them to build compounds. Building compounds will score points, upgrade your laboratory, and sometimes earn you lab tools.

Many aspects of Darrel Louder’s Compounded reflect a unique chemistry theme, but you don’t need to know any chemistry to play. Let me show you some of them, and then we’ll see if the gameplay is any good.
How to Play
Each player has a workbench where they will keep their elements, track their four experiments, and keep any lab tools they acquire. A 4×4 grid of compounds makes up the center of the table. Rounds will consist of the discovery, study, research, and lab phases as players attempt to get the most points.

During the discovery phase, players will draw elements from the element bag equal to their progress on the discovery experiment. Scientists can collect six kinds of elements: hydrogen, carbon, oxygen, nitrogen, calcium, and sulfur. After each player has drawn elements, everyone is allowed to negotiate and trade freely. You can exchange elements, lab tools, and even non-binding future favors. The only things you cannot trade are your points and experiment levels. Once trading finishes, anyone with more elements than space on their workbench must discard any excess.

The research phase is when players put elements on compounds. Your research experiment denotes the number of elements you can place. Once every research phase, you can exchange three identical elements to choose from the bag. You can put your elements on any compounds, even ones that aren’t claimed by you. If you place the last element needed to finish a compound, whoever claimed it would get to score it during the lab phase. However, if nobody has claimed it, you may use one of your other claim tokens to score that compound.

At the end of the lab phase, the compound grid is refilled. The compound deck also has five lab fire cards. When any of these cards are revealed when refilling, there is a lab fire. Any flammable compounds, have a fire icon on them, receive one flame token. Any compounds that reach their flame token maximum are destroyed. The elements on that compound are distributed to adjacent compounds by the player who claimed that compound or the first player if it was unclaimed.

At the end of a round, you will check to see if any game-end conditions have been met. If a player has at least 50 points or has completed three of their experiments, there is one final round. If the compound grid is unable to be refilled, the game ends immediately. Players will score a few points for any elements remaining on their claimed compounds or their workbench. Then, the winner is the player with the most points.


Final Thoughts
The rules for Compounded sound like they would work, but the game experience is not very fun. I think there is a small group of people who might enjoy the game, but you should note the flaws I point out to see if your gaming group will enjoy this. The theme is the only aspect where Compounded does a good job. The scoring track is a periodic table that is quite cool, even when you usually only go up to 50 or 60 points. It’s also interesting how each of the compound cards shows the ionic and molecular bonds that make up the compound. The rulebook also mentions that the experiment a compound will let you move up is based on whether it is a solid, liquid, or gas.

But everything else in the game is okay at best. The system of drawing elements, claiming compounds, putting your elements on those compounds, and then scoring points is subpar. It’s a little boring, and you don’t have too much control over what elements you have to play with. The trading at the beginning of each round is horrible. In one scenario, you get lucky and draw everything you want so that you won’t trade with anyone else. In another scenario, you draw nothing that you want, but nobody else is willing to trade with you or has any of the elements that you want. You are allowed to trade your lab tools or for future favors, but most people won’t do that because they want to keep their lab tools and are worried that future favors are non-binding.

Another reason why the trading is set up for disaster is that the elements that you can trade are drawn randomly. The players who get lucky and draw elements they need or elements that another player, who didn’t get what they wanted, require a much better position for success. They either can say they don’t want to trade or have huge leverage to make any reasonable trade with someone who got an unlucky draw. In most trading games, like Catan, you can try to put yourself in a position where you have the upper hand, play in a way where you don’t have to rely on trading, and can at least know that every resource in the game has some value.

In Compounded, you have no control over what elements you’ll have each round. When you get a bad draw, you have no choice but to find a trade to get out of the situation. When everyone else can see you drew bad elements, they will be even more likely to block trade with you. And to touch on the point of every resource having value, carbon is a useless element in every single game. Most compounds will either not include carbon or require one carbon and a bunch of other elements because of the theme. I’ve played games of Compound where nobody would even accept a free donation of carbon because that’s how useless it is.

When I read the game description and the game summary from the official website, everything points towards this trading mechanism as the highlight of the game. I don’t know what the designer was envisioning or experienced during their playtests. Still, you can’t make a trading mechanism where everyone’s pool of stuff to trade is determined randomly, and one of the things you could draw is so bad that you have to pay another player to take it from you. And then if you cannot get the stuff you need after trading once or twice early on, you will fall very far behind in the game with no chance of catching up.
You cannot catch up because the research and lab phases of the game hinge off of you getting the elements you need from a draw or a trade. The players who do manage to succeed during the discovery phase will be able to progress towards their compounds and score them. When you score a compound, you move up a level on an experiment. In the first four rounds, I get unlucky and complete one compound, and you get lucky and complete two compounds. At this point, you already have more points than me and can probably draw more elements each round and probably place more elements on your compounds each round. Once you get moving on your experiments, you will score more and more points each round, while players who fell behind early on will stay far behind.

The last parts of the gameplay that I want to touch on are the lab tools and the lab fires. Three lab tools give you abilities for the rest of the game, which I think are neat abilities. But for some reason, you are supposed to play the game with fewer tools than players. But then if you are playing with less than five players, you might complete a compound to take a lab tool that isn’t available anymore. The other tools are one-time use abilities that might let you go first in the next round or draw some extra elements for your research phase. Those tools are okay too. I prefer some of those tools because they don’t have the running out of tools issue, and the one that lets you draw more elements kind of gets around the trading issue for that round. Now the last tool enables you to burn any compound, even if it’s not flammable. The only thing you can do with that tool is to burn someone else’s compound, so they don’t get any points for it. It’s my least favorite tool because it is always useless as the carbon elements, or ruins someone’s game after its played.

You can think about the pacing for when a lab fire might occur. However, that threat usually encourages everyone to stay away from the flammable compounds and just focus on non-flammable ones. The way the elements scatter when a compound explodes is wired and fiddly.
This game has so many other issues outside of the gameplay. When I opened the box, the game came with some blank wooden disks, and I had to apply the stickers on them. And the claim tokens are supposed to have a permanent side and temporary side that look different. Your scoring token is supposed to have the temporary side on both of its sides. It was painful to put the stickers on, and if it was going to be so complicated, why didn’t they just put them on for you or put the graphic on the disks.
Also, the rulebook is a mess. I had to read the rulebook every time I played it because it was so hard to figure out what I was supposed to do. One thing I remember having to look up every time was how the claim tokens worked. They did a terrible job explaining the difference between your claim tokens and those you can use when completing an unclaimed compound. They called something a claim reserve, which is confusing because you use your claim tokens to reserve the compounds, and it was just a huge mess. There are a lot of questions about the tools and chemical reactions that can occur that I could never find answers to in the rulebook. The rulebook also doesn’t take into account the possibility of a tie, which created a very unsatisfying experience.
The box says that the game is for 2-5 players, but that is a lie. First of all, the rulebook says the game is intended for three or more players. If that’s the case, why does the box say 2-5 players? It should either say 3-5 players or that it includes a 2-player variant. Another component issue is that the bag is too small. I can barely fit my smaller than average hands into the bag, so I get another bag to put the elements in.
Enough said about the numerous flaws Compounded has. There is a small set of people that might enjoy this game. Your entire gaming group of 4-5 players just like the idea of a chaotic, crazy trading game with all sorts of secret alliances and backstabbing and be willing to play the game in that manner without caring too much about who the winner ends up being. If your group wouldn’t meet that entire statement, I highly recommend that you pass on Compounded because there are lots of other games that do these mechanisms better. The only unique thing about compounded is its theme. But still, when considering the audience that will like it, the game should’ve used a more political setting like world powers competing for the most influence, and the alliances and mistrust would be more fitting.
You can find Compounded for $25-40, but don’t waste your money on it. The terrible trading imbalance with carbon is just one lousy element. The rulebook is also subpar, so it makes an easy game much harder to learn. Due to these problems, I have to give Compounded a meager rating at 3.5 out of 10.