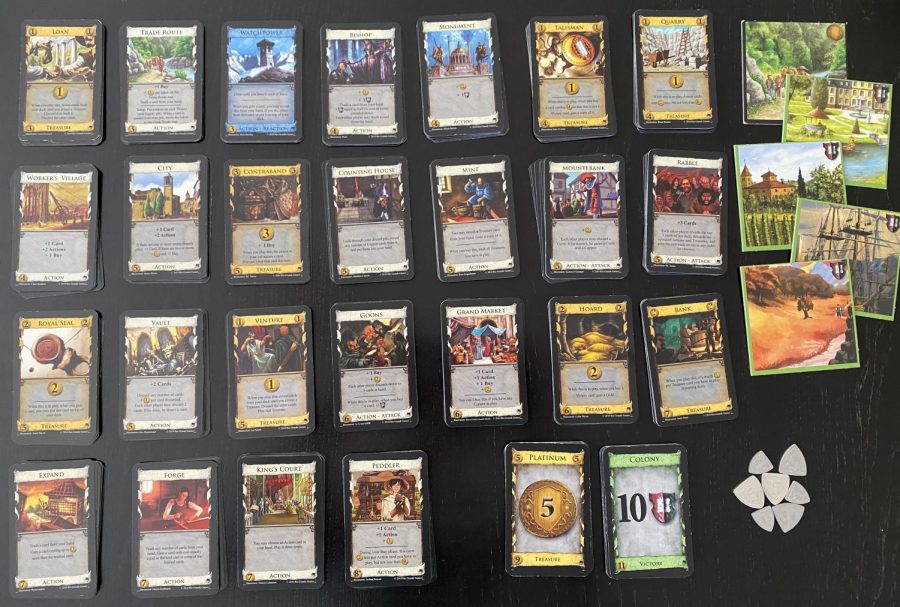 These are all the cards in Dominion: Prosperity. The main things that this expansion adds to Dominion are bigger and better base cards that go beyond Gold and Province, actions cards that provide victory points, and cards that cost seven coins.

This week, we’re going to take a look at Dominion: Prosperity, the fourth expansion for Dominion. As its name suggests, this expansion is all about accumulating big money and includes treasure and victory cards that go beyond Gold and Province, the previous limits from Dominion. However, the idea of this expansion being about big money can be concerning. Big money is a strategy about mainly buying the basic treasures and victory cards that many people frown upon because it isn’t very creative and doesn’t use many of the kingdom cards. Before I share my thoughts, let’s take a look at the new cards.
How to Play
Before I show you the new cards, I want to remind you of some commonly forgotten rules. When playing with cards from this expansion, it’s important to know that the kingdom cards can be action cards, treasure cards, or victory cards. Only the action cards can be played in the action phase. Then, in the buy phase, players play any treasure cards that they want before buying cards. The reason this distinction between treasure and action cards is important because this expansion is the first one where many of the new kingdom cards are treasures.

Final Thoughts
The gallery above has most of my thoughts about the individual cards, such as how popular they are, what they are useful for, and anything else noteworthy about them. I do like all of the cards that Dominion: Prosperity expansion adds to the base game, so when I say something negative, it’s a relatively minor problem. Now, I’m going to generalize the expansion by sorting the new cards into four groups. These groups are cards that work towards Platinum and Colony, cards that provide victory point tokens, the seven cost cards, and lastly cards that are more of the same.

To begin, Platinum and Colony are a great addition to Dominion. When they are present, the goal usually is not eight coins, but to get 11 coins. Everyone wants to race for Platinum because it’s a much better upgrade than any of the other money cards. The jump from Silver to Gold is two to three, but the value from Gold to Platinum increases by two, from three to five. The other thing that Platinum and Colony do is they make the game a little bit longer because when players move on to buying victory point cards, they are going to split between buying Provinces and buying Colonies. Without Platinum and Colonies, people always bought Provinces because there was no other choice. Because of the extended game length, I play with Platinum and Colony about half the time, and I enjoy the game the same about with and without them.

There are three cards, Bishop, Monument, and Goons, that provide players with the victory point tokens. My only complaint about this category of cards is that there are only three of these cards and not more. Even with only three kingdom cards that involve the victory point tokens, they are fun to play with because they can offset the conventional scoring methods of getting victory cards, and they are points that don’t take up space in your deck. Although most players are attracted to the these cards, they don’t dominate a game, and it’s possible to still win the game without using these cards. I really like the victory point tokens and am glad that it’s come back in some of the later expansions too.

Seven used to be the unlucky number in Dominion until this expansion added a few seven cost cards. There are only four of these cards, so they aren’t going to show up in every game, but when they do show up, players don’t mind getting seven. When you do get seven, and one of these cards is available, the designers and playtesters did a good job making these cards more attractive than Gold, what many people would otherwise buy when they got seven.

It’s always important for Dominion expansions to add some simple cards, which are more cards that do the same things as the basic cards. There are enough cards that provide multiple actions and enough other simple cards that generating a random set of 10 cards does not create something that only contains complicated cards. For players who prefer simpler Dominion, there are simple cards in this expansion that just add one nuance to make them unique. The idea that Grand Market cannot be bought with Coppers in play is new and interesting. Rabble is a simple card drawer, but it also has a new attack that can combat a top-decking strategy.

Overall, Dominion: Prosperity is another great expansion for Dominion, but with plenty of expansions for Dominion out there, is this one you should get it? Of course, if you are going to get all the Dominion content you can, there is no reason why you wouldn’t get this expansion. However, if you are only going to get one or two expansions, this is one you should get because it still maintains the simple feeling of Dominion while adding some new interesting rules with the victory point tokens and Platinum and Colonies. The only expansion that I think is better is Dominion: Seaside, and that is a personal preference. This is definitely my second favorite expansion for Dominion, and it is nearly essential, earning a 9.5 out of 10.