Board Game Reviews: For Sale 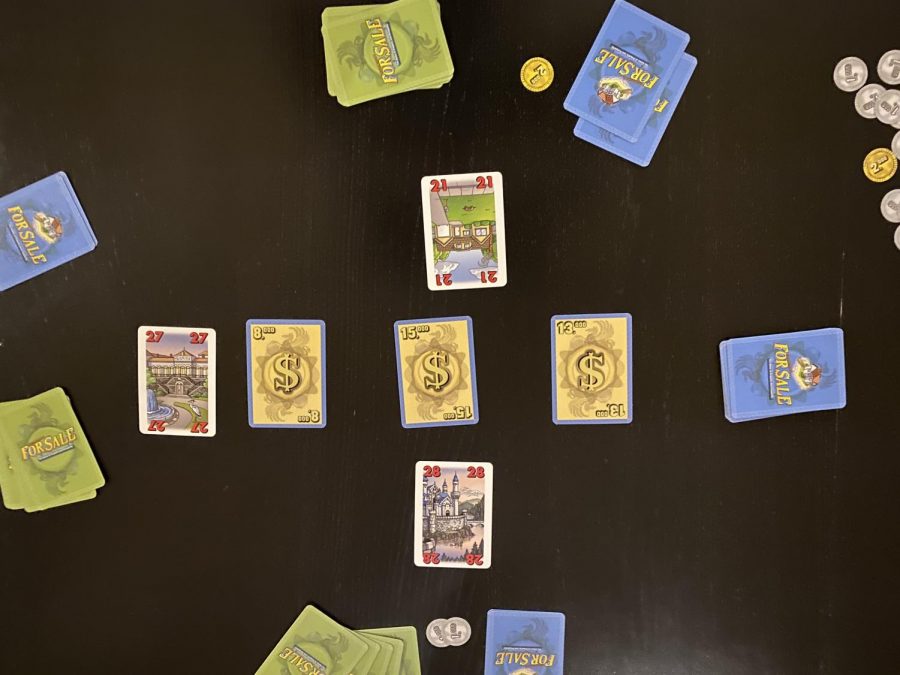 For Sale is a family-friendly filler game where players auction properties and use the properties they buy to get the highest paychecks.

When you wait for people to arrive, want something fun to do in a lunch break, or just need a quick gathering activity, filler games are a great option that everyone should have ready because you never know when the situation to play them will arise. For Sale, designed by Stefan Dorra, is a card game about auctioning properties and selling those properties to get the largest paychecks. The game is lighthearted, quick, and easy to teach, making it one of the best filler games in existence. I’ll show you how to play, so you can understand why this game is a must-have regardless of whether you play lots of games.
How to Play

The game takes place in two distinct phases. In the first phase, each player will have 14 or 18 coins, depending on how many players there are. Then, one card per player from the property deck is flipped face-up onto the middle of the table. The property deck contains cards numbered from 1 to 30, with 1 being a cardboard box and 30 being a lavish space station. Starting with the first player and continuing clockwise, each player chooses to bid for the highest property or to pass.

When bidding, the player places coins in front of them higher than the previous player’s bid. In the future, players can bid higher by adding more coins in front of them. When players don’t think it is worth bidding on the revealed properties or want to save money, they can pass. When they do this, they pay half of their bid, rounded down, to the supply and take the lowest valued property. When all but one player has passed, the remaining player pays their entire bid and gets the highest property from that round. Players will continue to auction off all the properties from the deck.

Once both phases are completed, players add up the value of their paychecks and remaining coins. The player with the most money is the winner.
Final Thoughts
I already spoiled my thoughts in the intro that this is a filler game that I enjoy a lot. I pull it out quite often before playing a heavier game or when I need to fill time. The reason I like it so much is that it does all the things that filler games need to do, which are being easy to teach and learn, fast to play, and taking up a small amount of table space.

For Sale is a game that doesn’t require a lot of space or a hard surface, like a table, to play on because the only components that are in the game are some cards and money tokens. My main problem with the game, which is a minor one, is that the money tokens are super thin cardboard, so they aren’t durable at all. Diving further into components, the card quality is decent, and the artwork on the cards is great too. I have a travel version of the game that comes in a small box, but it’s sometimes hard to fit all the components into the box. Considering that there aren’t a lot of components in this game, any version of this game that you get is travel-friendly.

When I say that the game plays fast, you may be wondering how long it actually takes to play. The box says the game takes 20-30 minutes, and that’s the game’s length at most. Most of my games of this only take 15-20 minutes and maybe an additional five minutes if I have to explain the rules to anyone.

Saying that the game is easy to teach may be an understatement. This is a game that I can teach players as we all play. You can explain how the auctioning of property works and then wait until all the properties are auctioned to explain how to use them to get paychecks. From the learning perspective, everyone I’ve taught this game to has had no issues with understanding the rules. This is a game that scales well; you can play it with young children and grandparents. It also doesn’t matter if you are playing with three or six players since the game is enjoyable at any player count.

First being published in 1997, For Sale is an old game; a valid question many people have is whether better filler games have come out in the last two decades. Honestly, I don’t think better filler games are coming out. The reason for this is that designers are always trying to do something different or outdo an older game, so newer filler games feature more complicated or fiddly rules. The newer filler games are made for people who play lots of board games, but For Sale is a filler game that is enjoyed by everyone. A short, portable game that is easy to teach and everyone likes to play is the mark of an excellent filler game like For Sale. I highly recommend it to everyone, and my rating on this game is an 8.5 out of 10.