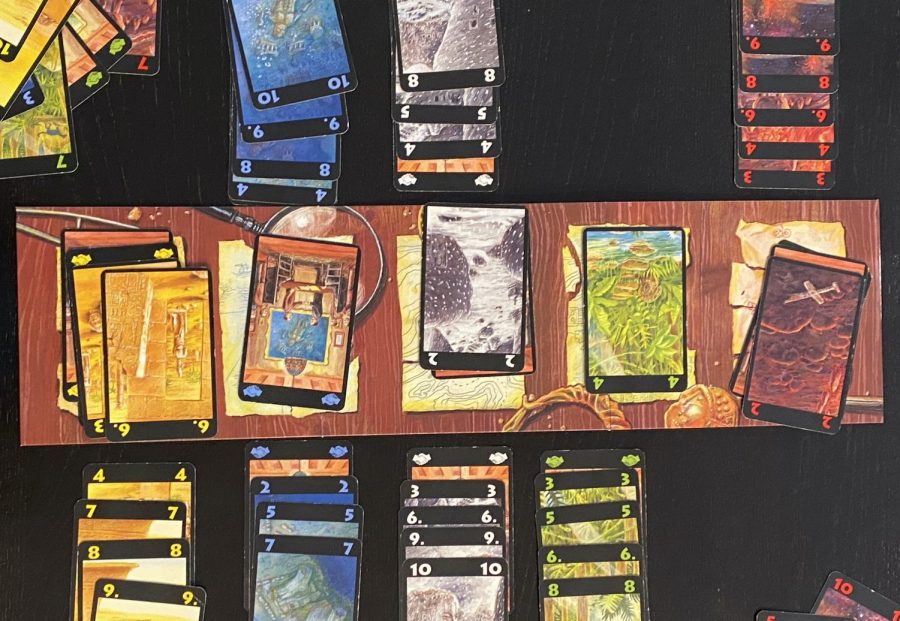 Two players make progress on their expeditions on their side of the board. At the end of the round, players score points for the missions they attempted.

This week, we are taking a look at Lost Cities, an easy 2-player card game where competitors will be going on expeditions to remote places in the world to score points.  The twist is that every journey has a cost of 20 points, so you’ll need to choose your moves wisely to not end up with a negative score.

Lost Cities is a straightforward game that was designed by Reiner Knizia, published by Kosmos Games, and takes 30 minutes or less.  Here’s how to play!
How to Play
The game comes with 60 cards and a small board with five spaces, representing the different missions.  Each card matches one of the five expeditions and has either a number or handshake icon on it, along with its artwork.  Each mission has a set of cards numbered from two to 10 and three wager cards with the handshake icon.  The spaces on the board mark the discard pile for each mission.  The progress players make toward the expeditions is marked in columns on their side of the board.

At the start of the round, shuffle the cards and give each player eight cards.  The remaining cards form a stack placed by the board.

On your turn, you will play a card from your hand and then draw a card.  There are two ways to play a card.  One way is to place the card on the discard pile that matches its color.  The other way to play a card is to add it to your expedition for that color.  To do that, the number on the card must be higher than the previous number you have on that mission.  Handshake cards must be played before any number cards of its color.  Place the card so it overlaps the last card, but you can still see the number on all previous cards.

The game suggests that you play three rounds and then add up your score from each round to determine the winner.  You can change that to shorten or lengthen your game experience.
Final Thoughts
As you can see, Lost Cities is an easy-to-learn game.  It’s fun to play and has a decent amount of strategic depth.  It’s going to appeal more to casual gamers because of the significant amount of luck in the game.

We’ll start with the tactics and strategy in this game.  The first layer of strategy is that you have to make sure your numbers in each mission add up to 20 or higher.  Since you have to play cards that are higher than the previous one, placing an eight on top of two early in the game means you can’t ever place three through seven if you draw them later.

The second layer is how much to risk on each expedition.  Since you have to play your handshake cards before playing any numbered cards, you have to guess how confident you are in reaching 20 points for that mission.  These can allow you to score a massive amount of positive or negative points.

The third layer of strategy is the discard system.  When you don’t add a card to an expedition, you have to place a card on top of the discard pile.  If the card is useful for your opponent, they can take it on their next turn.  Keeping an eye on your opponent’s expeditions allows you to discard wisely.  However, at the start of the game, you can get information about what your opponent might do by discarding low numbered cards you don’t want to play yet to see if they take them.

The fourth and final layer has to do with the end of the game.  I always follow the game’s recommendation to fan the cards out at the end, so you can count the number of turns you might have left.  Fanning out the last cards allows you to see if you should draw cards from the deck or from a discard pile, so the game doesn’t end before you finish playing all the cards you want to play.

Deciding how many missions and whether to play wager cards is a fun part of the game.  I enjoy making all these decisions, but you should note that there is a more substantial amount of luck in the game.

For instance, your starting hand could be problematic if it contains a lot of high cards or wager cards without another card of its color.  Despite that, I never feel that luck has ruined my score.  Throughout the game, both players will get good draws and bad draws, and the game is not heavy or long enough for it to impede the game experience.

Next, we’ll focus on replayability.  The issue with the replayability is that there isn’t much to explore.  You’ll see a few cool things in your first rounds, but the game feels the same from play to play.  No matter who I play with, nobody can point out anything that I haven’t ever seen before.  Therefore, I can’t play Lost Cities all the time, but I do enjoy it when I do play.

Lastly, we’ll dive into the artwork and components.  The artwork for the game is nice.  If you line up each color cards in order from the wagers to the 10, you’ll see that the artwork takes you on the expedition from the room where you settle your contract to the location that you are after.  However, the cards are not the best quality.  In my most recent play, I noticed that I could see through the cards because of the lighting, so be aware of that when you choose where you are going to play.

When you sum up all the pros and cons, you get a game with a lot of big swings.  The artwork is great, but the card quality not so much.  A good player can get a score as high as a hundred, but a single mistake can plummet you to a negative hundred.  There are lots of interesting choices to make, but then no choice at all but to push my luck.

Lost Cities is available online and in certain stores for about $10-25.  I don’t mind playing Lost Cities from time to time, so it ranks in the middle of the road at a 6.5 out of 10 because of it’s exciting choices and simple rules, but lack of replayability.