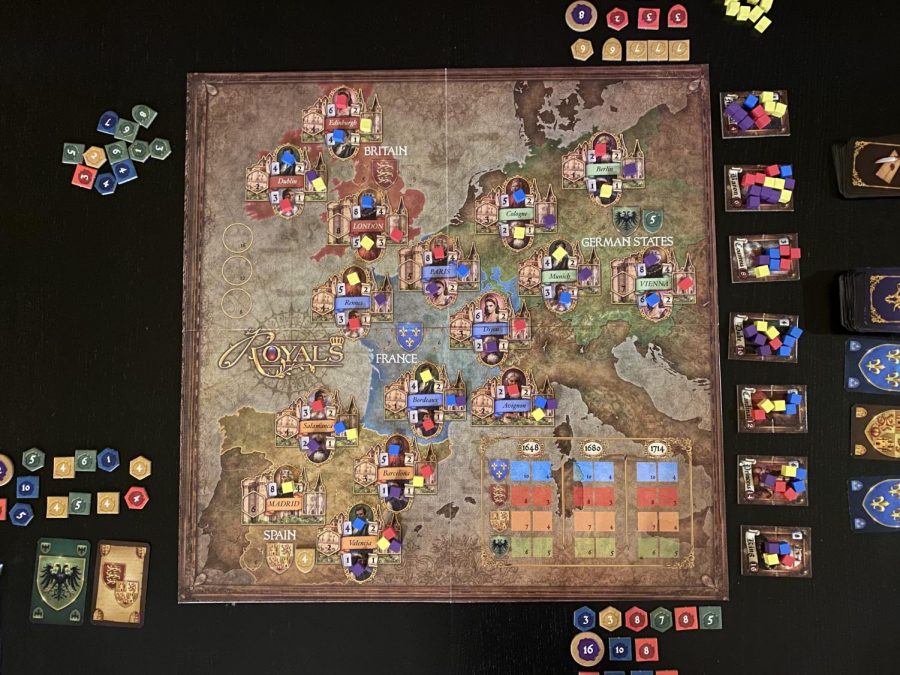 Royals is a family board game designed by Peter Hawes and published by Arcane Wonders. During the game, players collect country cards and intrigue cards and use them to influence nobles in four countries. Players earn points in a variety of ways, most notably through having the most influence in a country during a scoring round.

It is about trust and betrayal when you choose which nobles to influence and take over from your opponents as you attempt to get your royal family dominance over Europe. Royals is a simple set collection and majority control game for two to five players that takes 45-60 minutes to play. Let me show you how to play and then tell you whether you need to get this game.
How to Play
To set up the game, you will place the game board in the center of the table and various tokens with different shapes, colors, and numbers on their matching spaces on the board. Players want to collect as many of these tokens as possible because they are worth points. There are seven kinds of nobles on the board, and each one also has an additional tile placed next to the board that matches it. Each player will take a bunch of cubes of their color to use when they influence a noble. Lastly, you will shuffle the country cards and the intrigue cards to form two decks of cards. Three of the country cards are face-up.

Players take turns that involve three steps. First, a player must either draw three country cards or one intrigue card. When drawing country cards, the player may take any combination of face-up or face-down cards. Face-up cards do not replenish until the end of a player’s turn. If a player takes an intrigue card, it is always from the top of the deck.

The next thing a player can do is influence or take over a noble; this is always optional. Nobles on the board show two numbers. The left number is the number of country cards a player needs to influence a specific country. The right number is the amount of influence in that country a player gets for influencing it. When a player influences a noble, they put one of their cubes on that noble and another one of their cubes on the tile beside the board that matches that noble. Three country cards can always be used as any country card of your choice.

The last thing a player must do on their turn is discard down to 12 country cards and four intrigue cards. It is okay for players to exceed their hand limit during their turn since they only must discard after influencing a noble or choosing not to.

Now let’s explain how influencing and taking over these nobles can get you the point tokens on the board. Firstly, note each city on the board has two nobles in it. The first player to influence either noble in a city gets a city bonus. Next, the first two players to influence a noble in every city of a country will get a country bonus token. They can earn this even if their cubes are in the box on the side of the city. Also, players can earn a bonus when they have placed at least one cube on each of the nobles beside the board, meaning they have influenced at least one noble of each type. However, this bonus can be tough to earn because players don’t want to spread out too thin on the noble tiles. At the end of the game, the player with the most cubes on a noble tile, meaning they influenced the most nobles of that type, will win the tile and score its point value. In the case of a two-way tie, the tiles can be split in half; each tied player gets a half, worth half as many points. Three-way ties are even more dangerous because it means that nobody will win points for that tile.

A big scoring opportunity happens during period scoring, which occurs each time the country card deck runs out. During period scoring, each player adds up the influence they have in each country. The two players with the highest influence in each country will receive point tokens with ties favoring the player who influenced the highest ranking noble in that country. After the third period scoring, the game ends, and the player with the highest score wins.
Final Thoughts
Royals is an entertaining game to play and a fascinating one to examine strategically. However, the best part of the game is how easy it is to teach. All players are really doing is drawing some cards and then using those cards to collect influence. Beyond that, the game is about how to maximize your points and how to use intrigue cards. I would consider it slightly more complicated than common gateway games like Carcassonne and Ticket to Ride because there are many ways to score points and a few extraneous rules with hand limits and using cards as wilds. Still, Royals has the same feel as these other gateway games.

When I first played Royals, I knew it was a good gateway game because of its fast pace. Turns go by like lightning; since players are just picking cards and sometimes influencing a noble. There isn’t any downtime because of the heavy player interaction. Everything that opponents do matters, from what color cards they take to the nobles they influence on the board; players have to adapt their strategies to stay one step ahead.

Also, there are so many ways for players to try to get ahead that the game appeals to experienced gamers too. Despite the game remaining the same from play to play, the numerous choices that players make supply enough replayability. The game has lots of varied scoring methods, from racing immediately for the city bonuses to methodically calculating ways to get the country bonuses. Players also have to decide whether they want to dominate a few countries for period scoring or spread out to all of them and risk not even getting second place. One of my favorite scoring methods revolves around the additional tiles for each noble. The whole game appears to be about controlling the influence in each country, but there is another aspect of the game about controlling some of the nobles tiles, which can yield huge amounts of points. One especially interesting dilemma is whether to go for the bonus for influencing all the different nobles or to only focus on a few of them to make sure you get their points at the end of the game. Despite all these scoring methods, every move is a winning move, making the game fun since you always feel like you do something big whenever you influence a noble.

The last big positive element of the game I want to discuss is the game experience. The enjoyable game experience comes down to a few smaller aspects. First of all, the theme of trying to influence nobles and dominate is present. When playing the game, it feels like you are a powerful royal who can pull strings, make progress, and still get sabotaged by other royal families. The other aspect of the game that makes it fun to play is that it is interactive and a bit chaotic. It is imperative that the game doesn’t hide that players will have to get intrigue cards and undo what other people did once the board fills up. It’s not like one strategy is to take over your opponent’s stuff while another is to some completely different independent thing. The game is solely focused on just one thing, so everybody is getting involved in the game, making this kind of player interaction fun. That being said, you really will only get the best out of this game if you can play it with four or five players. Playing with three players is okay, but the map becomes too large for the number of players. Playing with two players is kind of boring with both players always scoring every country in each period scoring.

Before I give my final rating, I want to turn your attention to a few minor negatives. The first one has to do with the components. The noble tile bonuses that can split in half when players tie are really cool, and the other components are great too. However, I found that my board was quite weak; although it hasn’t broken yet, I feel that it will break any time I set up or clean up the game. That leads to the second small setback: the game has a few obscure rules for taking cards out of the country deck when setting up. I don’t like this because I have to look at the rules every time I play the game. Lastly, the rules for the game cover almost everything I would want to know except for what to do if I ran out of cubes. This happens more often than I thought it would, and there is no clear rule anywhere. Of course, note that these are tiny criticism that I have for an amazing game.

In the end, Royals is a fantastic game for both new gamers and experienced gamers alike. The game has many interesting strategic decisions that I’ll let you explore and figure out as you play, and it is always a fun experience and worth playing, even when you don’t do well. With that being said, I’ll give Royals a generous 9 out of 10, and I definitely recommend that you check this game out.