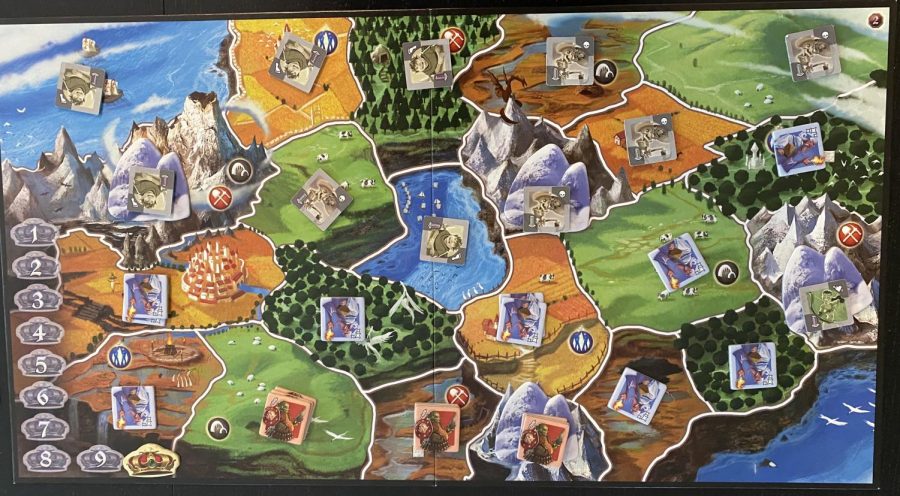 Small World challenges player to dominate a world that's too small for everyone. This is the board after a close 2-player game.

It’s a world of slaughter after all in the zany Days of Wonder board game Small World, designed by Philippe Keyaerts.  The fantasy-themed game has players control amazons, giants, skeletons, and more to take over a board that’s too small for everyone.  To win, players will need to select the best combinations of a race and a special power but also know when it’s time to go into decline and get a new combination.

Small World is a relatively simple game to learn and very fun to play. Let’s take a look at the rules.
How to Play

On your first turn, you’ll need to select your starting race from those available.  The first combination, the one farthest from the stack, is free to take.  If a player wants to take a different combination, they place one victory point coin on each race that they are skipping.  Additionally, players get any victory point coins that are on the race they pick.  The remaining races will slide down, and new race will be revealed.

The player adds up the number on the race banner and the special power banner, and they get that many tokens matching the race they picked.  Now it’s time for your active race to conquer the world.

The board is divided into different regions that you can conquer.  The first region you conquer must be one touching the edge of the board or touching a sea that is on the outside of the board.  You cannot conquer water regions.

The base number of tokens you need to capture a region is two.  However, you need to use an additional token for each token already in that region.  These tokens can include another player’s race token, lost tribes that start in some places on the board, or mountains.

If you conquer a region that belonged to another player, that player puts one token from the area in the box. They keep the rest of the tokens, if any, in front of them.

The next region you conquer must be adjacent to a region that your active race controls.  You can capture as many regions as you want until you run out of tokens or don’t have enough tokens to conquer the place you want to.  If the latter of those two occurs, meaning you still have some race tokens you haven’t used yet, you can attempt a final conquest.

To do this, you pick a region that you want to control.  Then, you roll the reinforcement die and add its result to the number of remaining race tokens you have.  If you have enough strength to conquer the region, the final conquest is successful.

Regardless of whether the attempt was successful, or if it even happened, you get to redeploy after the conquest phase.  You can change how many tokens you want in each of your regions as long as you leave at least one token everywhere.  However, you cannot change your position between other player’s turns.

Once you finish redeploying, you collect one victory coin for each region you control.  You might also collect additional victory coins because of your racial or special powers.  Between turns, any players with race tokens in front of them, because you conquered one of their regions, can redeploy those tokens in any of the areas their active race controls.

The round marker moves up after each player takes their turn.  On subsequent turns, you’ll have to decide as to whether to continue fighting with your current race or to go into decline.

If you continue fighting, take all but one race token from each of your regions to your hand.  You’ll use these tokens to conquer additional regions, redeploy, and collect victory coins.  The way you capture regions is the same as your first turn, except now you have some areas under your control to start from.

If you prefer to go into decline, you’ll flip over one token from each region you control to it’s in decline side.  The rest of the tokens go in the box.  Your in-decline race will continue to score victory coins as long as they control a region, but they usually lose their racial and special abilities.

Each player can only have one race in decline at a time, so if you go into decline a second time during the game, any race tokens remaining from your previous in-decline race are removed.  Once you remove and flip over your tokens, you get one victory coin for each region that your in-decline race controls.

At the start of the turn right after you went into decline, you will choose a new race and special power and then conquer regions, like your first turn in the game.

At the end of the last round, players add up the value of their victory coins and the player with the highest total wins.
Final Thoughts
That’s everything you need to know about playing the game, but there are a few minor things I haven’t told you yet. These include how you can abandon a region at the start of your turn or start from any edge of the board if all your regions were conquered.

But the biggest thing I didn’t elaborate on is what the racial and special powers do.  There are too many different powers to explain them all, so the slideshow below tells you about the highlights.

14 races and 20 special powers give you a ton of replayability.  Furthermore, it’s a fun to have the special powers and races in separate stacks, so they fit together to form more combinations.  That idea of putting two powers together is something I would like to see more often in games.  The combinations are typically balanced because the number of tokens you get depends on how good the ability is.

The conquering and redeployment phase of your turn is solid.  Small World does an excellent job incorporating combat without dice because the conquests are all about how many tokens you have compared to the number already in the region.  The final conquest allows you to push your luck.  Since the reinforcement die has three blanks and each number from 1-3 once, players have to choose whether they want to take their chances with a dice roll or use all their tokens.

Mountain regions require an extra token to conquer for the whole game. That’s quite interesting because they provide you with more defense. It’s like a few places on the board that are harder to conquer, but more powerful.

Another exciting thing is the way you have to pay victory coins to skip a combination.  It is sometimes worth it to spend more points on a specific combination.  You also have to realize that the combinations you skipped are more appealing now because you added victory coins to it.  And then there are the strange times when nobody wants a particular combination at the front of the line, so everyone pays to skip it.  But then it becomes more valuable because you get some points just for taking it.

One of the most significant decisions you have to make is when to decline.  Going into decline wastes a turn, but gives you a better chance on your next turn because you’ll get a full force of tokens.  On the other hand, you can’t decline a lot because you only are allowed to have one race in decline at a time.

As far as the game experience goes, Small World offers a lot of choices in what race to choose, where to conquer, how to redeploy, and when to decline.  Like any area control game, it is possible to have a landslide game, especially when there is a distinct skill difference.  With more than two players, there can be a kingmaker problem where the decisions that one player makes allows another player to do better.  However, unlike most games, this game offers a solution to that issue.  If two opponents gang up on you or you find your race dwindling to nothing, you have the option to decline and get a new race.

The art and production quality in Small World is fantastic.  A lot of work went into designing the boards and the race tokens.  As an example, you can find some symbol of mining, magic, or caves, in the art for the regions with those icons.  There is a fantasy theme, but it is a rather silly one.  The side of the box adds an “s” to laughter to make slaughter, and most of the combinations, like diplomat trolls or alchemist ratmen, sound a little nonsensical.  But all that does is add some fun to the game experience.

Small World is an excellent game that many people would enjoy.  You will like this game if you like games with area control, special abilities, and limited luck.  The game comes with two double-sided boards, one side per player count.  Games will usually take anywhere from 30-60 minutes, and you can buy a copy of Small World online or in certain stores for $35-50.  Overall, I give Small World an 8 out of 10 because of its clean mechanisms, replayability, interesting choices, and silly, engaging theme.