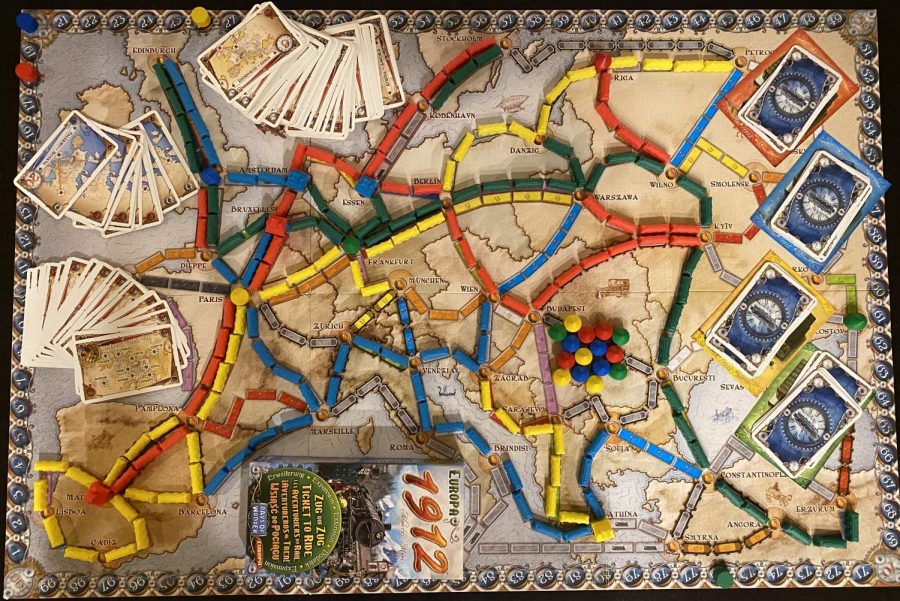 The Ticket to Ride Europe 1912 expansion includes new destination tickets and a "warehouse and depots" module that changes the game.

Ticket to Ride Europe 1912 is a similar expansion to Ticket to Ride USA 1910 in that it includes new destination tickets for the game. This expansion also consists of “big cities” and “warehouses and depots” modules compatible with any Ticket to Ride map. I’ll show you how they work and then share my thoughts about whether you need to get this expansion.
How to Play
Additional Tickets

The Ticket to Ride Europe expansion provides a new set of tickets that includes all of the ones from the base game and some new ones. There are also six new long destination tickets and a separate stack of tickets for the “big cities” variant. The rulebook includes three ways to give players starting tickets, but only the big cities add new rules to the game.

In the “big cities” variant, some of the cities on the board are big cities, and the game comes with a card to identify them. All of the destination tickets will connect at least one, but usually two of the big cities. There are no end game bonuses in this variant, so players have to maneuver their way into a few crowded cities to win.

The “warehouses and depots” module adds some unique strategy to the game. Each player will take five depots in their reserve and will have one warehouse of their color. Before the first turn, each player will place one of their depots on any unoccupied city.

During the game, whenever players draw train cards, they also take one card from the top of the stack and add it to their warehouse. As you draw more cards, your color warehouse will have more cards on it too. However, when any player claims a route connected to a depot, they may discard one of their remaining depots to take all the cards from the warehouse whose color matches the color of the depot they connected to. You can take cards from warehouses that don’t match your color.

Depots also block players from placing train stations in cities they are in. You can also place a depot on an empty city as a free action during your turn. All the players with the most remaining depots will get 10 points.
Final Thoughts
Let’s start with the new destination tickets. I like that the expansion included a full set of the old tickets from the base game and some new ones. This way, you can’t tell them apart from wear and tear. Furthermore, the tickets have symbols to indicate whether they are in the base game or not and whether or not you need to use them for the “big cities” variant.

The rulebook explains three ways to distribute starting tickets. One of them is the “big cities” variant, and that one is fun to play and competitive. It’s a good choice for a cutthroat game, but the train stations from the base game decrease the pressure to reach as many big cities as possible.

The other two ways to give the starting tickets are called expanded and mega. Expanded gives players the same one long ticket and three regular tickets as the “big cities” variant, but it includes the new tickets. I find this distribution of tickets okay.

Honestly, these are very minor issues because having more tickets is already such a great thing. I usually end up using some hybrid between expanded and mega to distribute tickets.

The warehouses and depots are an interesting expansion, but it is not one that I will use all the time. One of the hardest parts about teaching that variation is that the cards on the warehouses don’t belong to anyone, and anyone can pick them up by claiming a route to another player’s depot. It also doesn’t help that the rules were unclear about some parts of this module, like when you can place an extra depot during your turn.

The aspect I like about this module is that it adds an extra layer of strategy. For one, you are going to shuffle the deck more often, and as you go through the deck, you’ll notice that some colors are harder to get because they are in the warehouses. I also like the strategy about where to place depots and whether you ever place another one during the game. The depots add some tension because maximizing the cards per depot pushes a player’s luck. The rules balance out because the players that use the least depots will get 10 points, so you aren’t forced to use any if you don’t want to.

I think that warehouses and depots are best with more players because you’ll cycle through the train cards faster and see what colors are rarer. Although it’s an exciting module, I usually play Ticket to Ride when I am teaching a new board gamer, so I don’t usually use this module. However, I wouldn’t mind seeing how warehouses and depots play out on other maps.

Overall, Ticket to Ride Europe 1912 is an excellent expansion for Ticket to Ride Europe. The new tickets are a necessary addition to the game, and the warehouses and depots are fun to bring out once in a while. My only issue with this expansion is that the rulebook focused so much on supporting many languages that it didn’t do a good job teaching the rules in any of them.

I rate expansions based on how you need them. Since this expansion is a must-buy for anyone who likes Ticket to Ride Europe, this expansion gets a 10 out of 10.