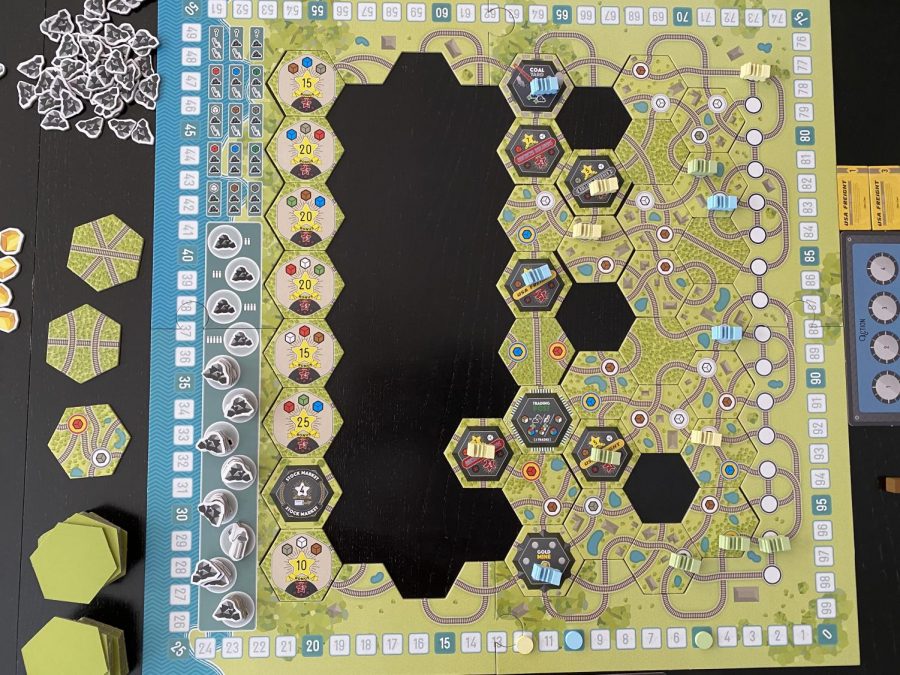 Each player has moved their trains about half way across the board at this point during a game of Whistle Stop.

With the rapid expansion of railroads after the completion of the Transcontinental Railroad, players will be racing their trains across the U.S. Along the way, players will pick up various resources and deliver them to small towns and stops on the West Coast to get railroad stocks. Players will also need to find a way to get more coal and whistles to pull off their moves.

Whistle Stop is a pick-up and delivery game for two to five players designed by Scott Caputo and published by Bezier Games. I’ll explain how to play and then tell you whether or not I recommend it.
How to Play

Final Thoughts
Overall, Whistle Stop is an interesting game. There are lots of railroad tracks placed as the game progresses, and players have to decide which way to move their trains, so they can get the resources they need at towns and the end tiles. There’s also a constant battle in getting more coal and whistles, so you can do all four actions each round. However, there are just too many small things and a few big things that are problematic and stop me from playing the game very often.

Before I get into my list of negatives, I want to point out the few positive things about the game. The first good thing in the game is the artwork. The board and tiles have good artwork, and the board continues to look good even as more and more tiles are added. The other good aspect of the game is that the game offers interesting tactics and strategies. At every turn, you have to decide where you want to go, what resources you want to get, and what you are trying to achieve on this turn and future turns.

While the theme of traveling west isn’t that strong, the idea of moving trains around the board is very evident. The pick-up and delivery mechanisms are also fun because you can pick up a good on one side of the board and use it on another side. There are also multiple things to spend resources on.

This is a game solely for people who really like trains or train games or enjoy pick-up and delivery games. Beyond that, you also have to like games with lots of player interaction. The reason why I give a recommendation to such a small audience is because of all the things you have to endure when playing a game of Whistle Stop. Here is my list of issues with the game.

The first issue you will encounter happens before you get to play your first game. When you are reading the rulebook, you are going to have unanswerable questions and confusion. The rulebook lacks examples of how movement works. There are also sections of the rulebook that I believe are mistranslated since I’ll read it and notice that a few wrong words that give an entirely different interpretation of the rules. There’s also a lack of clarity when it comes to upgrades, their powers, and whether are not you can only have three of them in the spots that fit on your player board. If you cannot understand the rules when you read the rulebook, it becomes impossible to teach the people you are playing with the rules, and the game experience is not going to be memorable enough for players to remember the rules the next time they play Whistle Stop.

The next issue happens before every game of Whistle Stop; it is the tedious setup. For the round tracker, someone has to stack up two coal per player on about 10 spaces. That takes a lot of time to put up, and it only takes one bump for all the hard work to crumble. I don’t know why the game didn’t just have a round marker that could move down the track, and players could take resources from the supply. The other part of setup and clean-up that I find annoying is having to sort through all the tiles for regular tiles and special tiles. You have to do this sorting to set up the middle column in each game.

The next problem with the game is the steep learning curve. Normally learning curves don’t stop new players from enjoying a game, but the learning curve is too steep in Whistle Stop for new and experienced players to play together. The common trap that new players can fall into is not knowing how to get more coal, so they take two actions per round while the experienced players get four actions per round. Let’s say an experienced pulls off an interesting move. A beginner player would have no idea that move was even possible until this moment. That’s partly because of the unclear rules but also because this is a game where you will usually have to see a move done by someone else before you can intentionally do it yourself.

Whistle Stop is not a clean design where all the mechanisms come together and click. Instead, it feels like a bunch of parts assembled together. There’s the pick-up and delivery part, the tile-laying part, and the asymmetry part, which includes the upgrades. The upgrade part is an extraneous part of the game because the game could be played without them. However, the upgrades do allow players to get some special abilities to help them pull off unique moves that other players couldn’t do. My problem with the upgrades is that they are too easy to get right away and too hard to get later. Players can easily move four times on round one and use four resources to buy two upgrades. If everyone does this, they are no upgrades left by the time a fourth or fifth player gets their turn. The game says that those players can still get an upgrade if they steal it from another player. I don’t like the upgrade stealing idea at all because it is unnecessary and makes the game less fun. Furthermore, unless taking an upgrade is going to ruin another player’s entire strategy, game, and experience, stealing an upgrade is usually not even worth it because of the high cost.

The last complaint that I’ll mention is the scalability of the game. There is no ideal player count in Whistle Stop, and the game instead the game suffers a bit at all the player counts. With two players, there isn’t enough interaction since there are only 10 trains on the board. In a three-player game, the stock majority bonuses are less spread-out, which can give one player 30-45 more points than other players. With four and five players, the game becomes too interactive and difficult because everyone is adding new tiles each round. There is also a lot of downtime between turns in Whistle Stop, and both downtime and game length increase with more players. No matter how good of a move you have planned, all it takes is one player to place a tile where you wanted to, move a train to the stop you wanted to go to, or steal your upgrade to foil your bests laid plans and make you take extra time to rethink.

The group I play Whistle Stop with has gotten over the rules hurdle. Some of the other issues are still present in every game. However, I feel like the experience in Whistle Stop had already peaked after only a few games while players were trying out new moves. Each time I play it now, it feels the same since everyone knows the strategies, and it’s just a matter of who ends up doing better. Whistle Stop is a game you really need to think about or try first before you buy it because it is only intended for a small subset of gamers. It has way too many problems for me to want to play it a lot, and it’s therefore only going to get a 5.5 out of 10 from me.