Boat project has Carlmont students racing to the finish line 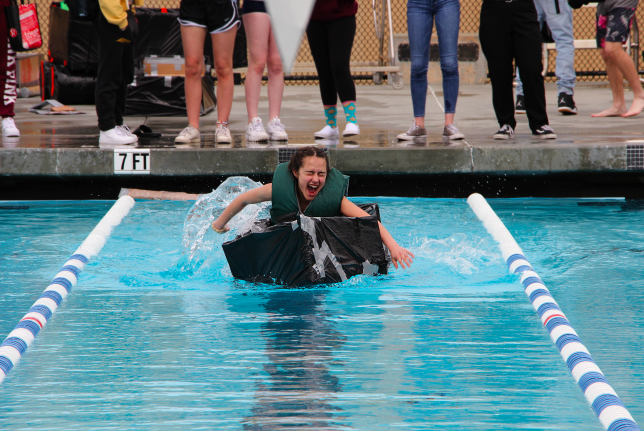 Donya Khonsari, a sophomore, excitedly races her boat down the pool.

This year’s geometry classes competed against one another in the second annual boat race.

The geometry teachers asked their students to create boats made only of cardboard, duct tape, and plastic bags that would be able to float across the pool and back while carrying a student.

The project was designed to teach students about their most recently learned concepts: volume and surface area.

Students began working on the project last week starting with “mini-projects,” the first being a penny lab to learn about buoyancy.

As the week continued, students calculated, designed, planned, and constructed their boats.

“Our boat took around four hours to build,” said Mairwyn Forster, a sophomore. “Cutting the cardboard and figuring out what shapes to create to build the best boat took a lot of time.”

Nearing the end of lunch on March 19, students gathered at the pool, ready to compete with their boats.

As the fourth period began, geometry teachers Chun, Ramtin Aidi, Matthew Miskelly, and Molly McNinch started directing students on where to put their boats and then had them sit in the bleachers.

Aidi emceed the race by announcing heat assignments as Chun, Miskelly, and McNinch cheered on their students from the pool deck.

Numbers were assigned to the teams of three to create heats. The races began with heat one, a mixture of groups from all different classes. Race after race, students watched from the bleachers or pool deck and cheered on their friends and teammates.

Trevor Douglis, a sophomore, was one of many students who paddled across the pool in the boats.

“The actual races were my favorite part because I liked competing and racing against my classmates,” Douglis said.

However, the event wasn’t for everyone. For those unable to participate in the project, there was an alternative packet that was worth the same amount of points as the project.

“This project was a lot of work, so I understand why some people weren’t able to do it. But in the end, it was fun to see everyone’s different boats and watch them race,” said Sarah Drayer, a sophomore.

After every team had competed once, the winners of each heat moved onto the semi-final round.

Being the fastest group and having the boat that was constructed the best, the winners of the boat race were sophomores Sofia Sharron, Saylor Reinders, and Alexia Wong.

After a long afternoon of racing, teams wrung out and threw away their boats, winners were awarded a trophy, and the students were excused.

“I’m super proud of my students. They had a lot of fun and it wasn’t a typical day in class which made it very fun,” Chun said.