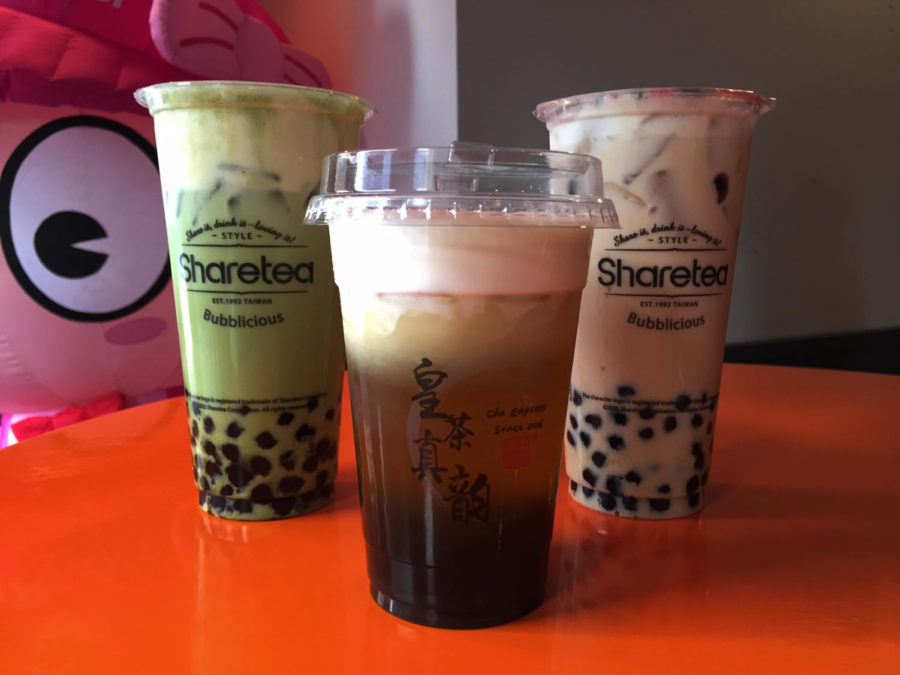 Downtown San Mateo has over 10 milk tea shops, including the Taiwanese brands Sharetea and Cha Express.

When thinking about dessert, the American classics probably come to mind: cake, ice cream, apple pie, and various others that are frequently seen in American culture.

While they are still widely loved, other desserts, like boba tea, have taken the stage in the Bay Area.

Boba tea, the sweet, caffeinated tea drink also known as bubble tea or milk tea, has been stealing the hearts of Bay Area residents and has fueled the opening of hundreds of boba tea shops in the area.

But what exactly is driving its rise to popularity in the Bay Area?

The answer lies in the region’s unique population and economy that work in conjunction to create the perfect boba hot spot.

To understand the role of population in its popularity, it’s important to know where it originated from.

In the 1980s, boba began being sold as a topping for tea in food stalls in Taipei, Taiwan. From there, the drink became a modern Asian dessert staple and later gained recognition around the world.

With this in mind, it makes sense that boba tea, being an Asian dessert, is more popular in the Bay Area than in other parts of the country.

Boba tea is also a comparatively cheaper and a more adventurous alternative from typical American desserts.

“I like buying it since it’s cheap,” said Dominique Veinstein, a sophomore.

Additionally, the Bay Area is also notorious for having the highest cost of living in the United States, making it difficult to come by cheap and fresh desserts. At restaurants like Apple Fritter in San Mateo, a regular milkshake is priced at $5.95, which isn’t an unusual price to come by in the Bay.

In contrast, a regular 24 oz. milk tea typically costs $4, making it more attractive to the everyday consumer over other options.

Price and demographics aside, boba tea itself has its own appeal.

Priscilla Chan, who has worked in the boba tea scene for over two years, said, “Boba tea is different from other desserts because you can get it in a bunch of different flavors, and it’s kind of a food and a drink at the same time, too.”

Tpumps, which has five Bay Area locations, offers more than 40 different mix-and-match flavors, making it difficult for other desserts to surpass. Additionally, boba shops typically offer a variety of toppings, such as grass jelly and aloe, which makes it more filling than other drinks. It is also custom for boba shops to openly offer ice and sugar adjustments, which is not found in other beverage stores like Starbucks.

In more ways than one, boba tea is a more favorable option for Bay Area residents.

“I’m interested to see what else boba will become in the future,” Veinstein said.