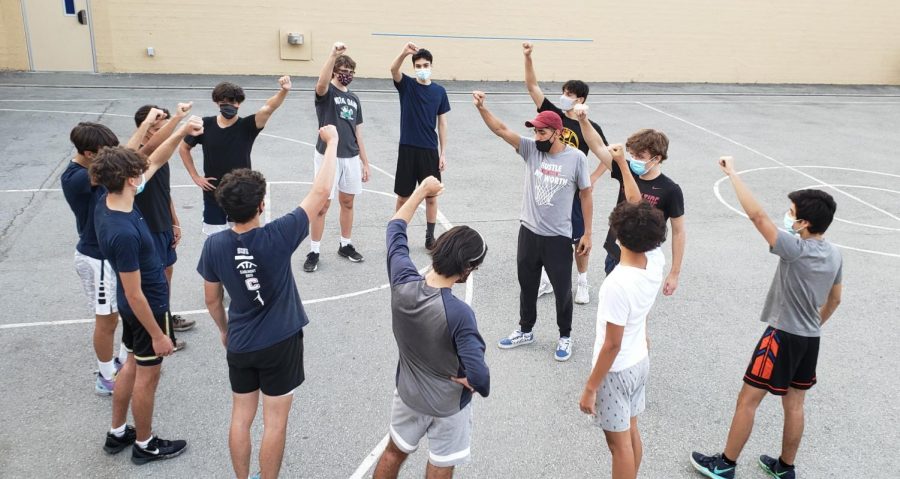 Players and coaches gather to perform a socially-distanced team huddle after a workout.

In preparation for the postponed season’s start, the boys basketball team has begun their preseason conditioning workouts with their season set to begin in March next year.

The pandemic delayed many sports seasons; however, many sports are starting to prepare for their seasons.

As per The California Department of Public Health’s order for youth sports, the team maintains social distancing when attending practice and workouts.

While social distancing is a challenge, the coaching staff has found ways to help their players improve. The players and coaches meet twice a week for an hour to work on conditioning, technique, defense, and team chemistry, more difficult while maintaining at least six feet of distance.

In attempts to manage the team’s possible contact with the virus, before each conditioning session, players must fill out a survey asking them about their possible contact with COVID-19. In addition to the survey, the team takes more precautions to ensure the players’ and coaches’ safety.

“We are always taking temperatures, and having the players wear their masks, they are socially distanced, they’re still not sharing equipment,” said Ron Ozorio, the head coach of the Carlmont boys basketball team.

Due to the COVID-19 precautions, the team hasn’t been able to share equipment or scrimmage against each other, but the team has found another way to build team chemistry. After every conditioning session, the players circle up to give each other shoutouts that allow them to describe the positive aspects of their teammate’s performance during that practice.

“Giving shoutouts does multiple things to help us as a team. It boosts whoever is receiving the shoutout’s confidence, and it helps us be more vocal. A big part of basketball is being loud on the court,” said Daniel Awad, a senior who plays on the team.

While in-person conversations are limited, maintaining communication with players isn’t a problem for the team. They have an Instagram account, and Facebook page, and many group chats that connect the players and coaches.

“We’re getting to know each other personally as well as on the floor, the coaches talk to us like people rather than just players, which helps us communicate what we want as players,” said Alex Wong, a senior who plays on the team.

Despite working around the restrictions on what they can and can’t do, many have noticed a difference in player motivation. The coaches say they’ve seen roughly a 50-50 split between motivated and unmotivated players during the preseason.

“Whether it’s Covid, or because we’re five months away from the season, they don’t feel any urgency. We are trying to get through to those players who don’t have any urgency,” Ozorio said.

With little information available about the upcoming sports seasons, the future of the team is still unknown.

Despite the new challenges the team is facing, they encourage the players to continue working hard.

“You can trust me that Sequoia, Burlingame, Serra, and Menlo-Atherton are all playing; if you’re just sitting around waiting to hear that we are getting started, you’re going to be late,” Ozorio said. “You have to get ready now.”