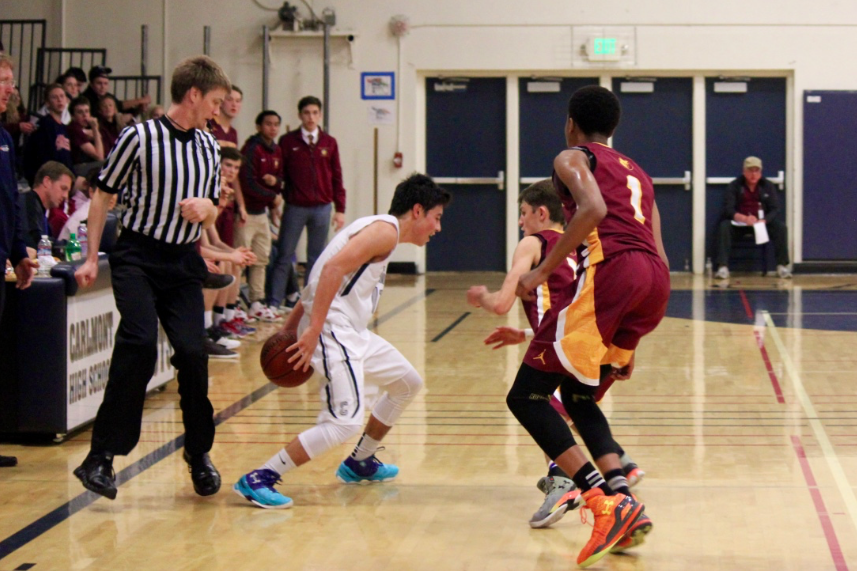 Senior Tyler Brandenburg dribbles the ball away from the Menlo-Atherton players.

The stakes were high at the first quad game of the year. With unwavering support from the Screamin’ Scots and a strong team bond, boys basketball started and ended the game proudly.

“Even though we lost, I think this can be a turning point in our season. We have a lot of positives to take away from this game leading into our push for a spot in the PAL playoffs and qualifying for CCS,” said senior Tyler Brandenburg.
The players started on a strong note, but they began to trail behind in points as the game went on. Still, they played as hard as they could, ending with a losing score of 63-47.
“I think that we played a really solid game defensively and offensively. We matched their pace throughout the game, but fell short in the end. Moving forward, I think we can be proud of this game. We stuck with arguably the best team in the league and that should give us confidence for the upcoming games,” said senior Andrew Carlsen.
The crowd could feel the players’ determination, and students, parents, and alumni alike continually cheered.
Senior Matthew Carroll said, “I don’t go to Carlmont, but I came to support because I know a lot of Carlmont people from Ralston [Middle School]. Even though we lost, it was a really fun game to watch.”

In the following quad and season games, the basketball players know that they will try their best and the Carlmont community will continue to support them.