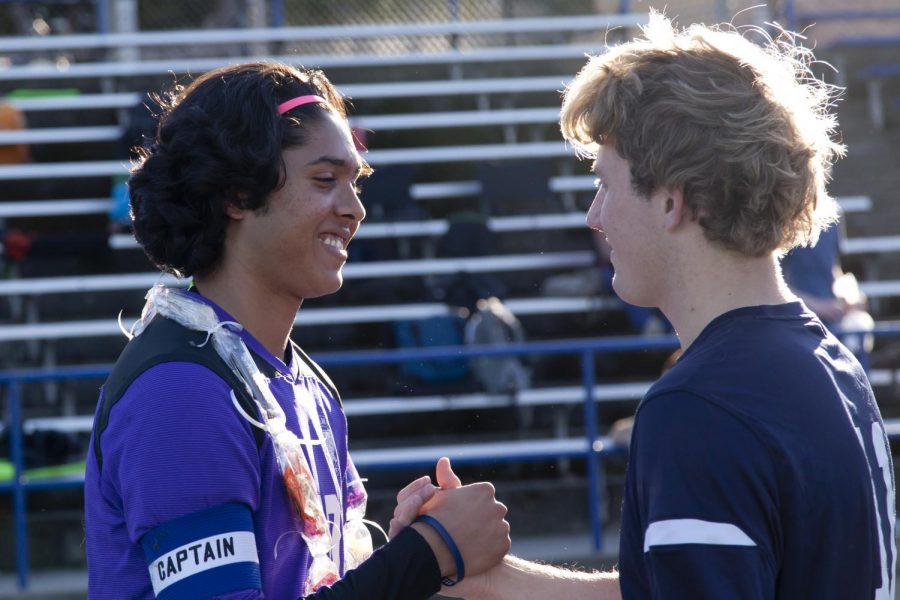 Varun Suklikar, a senior, daps up Fletcher Smith, a junior, before handing off wreaths to the seniors during senior night.

This year, senior night for Carlmont soccer was held on a home game against the Burlingame Panthers for eight players who will be moving on from Carlmont’s soccer program.

Parents and family members shuffled down the bleachers to congratulate the seniors — some sighed in disbelief at how quickly time flew from their first to last game on the Carlmont field.

Once on the field, the group surrounded assistant coach Chris Zano who spoke on behalf of the departing players.

Zano was proud, but also rather melancholic throughout his speech.

“Our seniors have done a great job this year, of setting an example and creating an environment for success for this team. It’s something for the underclassmen to live up to the next couple of years,” Zano said. “You’re not going to get a better example than this.”

Zano ended on a high note, mentioning that the Scots are looking forward to a great run in the playoffs and that they have a shot of ending first in their league.

With Zano’s impactful last words from the ceremony and the overwhelming support from the bleachers, Carlmont was in the right head-space, walking on to the pitch with the league title on their minds.

Ranked second in the Peninsula Athletic League standings, the Scots faced Burlingame, a team that was ranked third and equally hungry for a win during their last week of the season.

Carlmont ran the pace of the game with confidence on their home turf, and within the sixth minute Gabriel Anson, a senior, dribbled the ball past the Panthers to score.

Patrik-Default Geleziunas, a senior, led the first half with two goals, leaving Carlmont with a 3-0 lead and Burlingame flustered.

However, the game on the field was just a footnote to the meaning of senior night. The last home game of the year was bound to leave players and family members with mixed emotions.

“It’s a little bittersweet. I mean, I’m happy that he’s come this far and I’m going to enjoy this last game, but it’s still sad knowing that it’s the last one that he’s gonna have here at Carlmont,” said a parent of Maxwell Lee, a senior.

The senior players recalled their most memorable moments, one being Maxwell Lee, who thought of his favorite game against rivaling Sequoia last season.

“We were pretty much in a tie-race against them and in our last game with them, I played really well and that was pretty cool for me,” Lee said.

During the second half of the game, both teams struggled to make any progress, and at one point Varun Suklikar, a senior, expressed his frustration from the stalling game and told his teammates to “keep up the intensity.”

Carlmont may have managed to hold up their defense in the first half, but connecting passes wasn’t going to be enough against Burlingame’s assertiveness.

In a race against the clock, both teams played with pure aggression: Burlingame looking to tie after scoring three goals and Carlmont pushing back to hold their four goals.

Slip-ups at the goalie post and contradicting calls created anxiety for Carlmont up until the timer ended the game at 4-3. The blue and white sidelines went wild after winning an important game in the exhilarating last minutes.

After this victory, Carlmont is guaranteed a run in the playoffs. Follow their upcoming games on the Carlmont Athletics website.

However, the team is also looking towards next season, as it’s going to be a dramatic adjustment for the varsity soccer team when half of their teammates graduate. They have been a crucial part of the leadership in the team, especially in the team’s toughest losses.

Overall, soccer has been a huge part of these students’ lives, and for some, it’s a chapter they will have to leave in high school.

“All my best friends play soccer and I probably won’t be playing soccer again after this, so just going away from that, I’m gonna miss it,” said Danny Wilson, a senior.

Even though the upperclassmen have to leave Carlmont soccer behind, they can look back with gratification at the meaningful connections and memories they made.