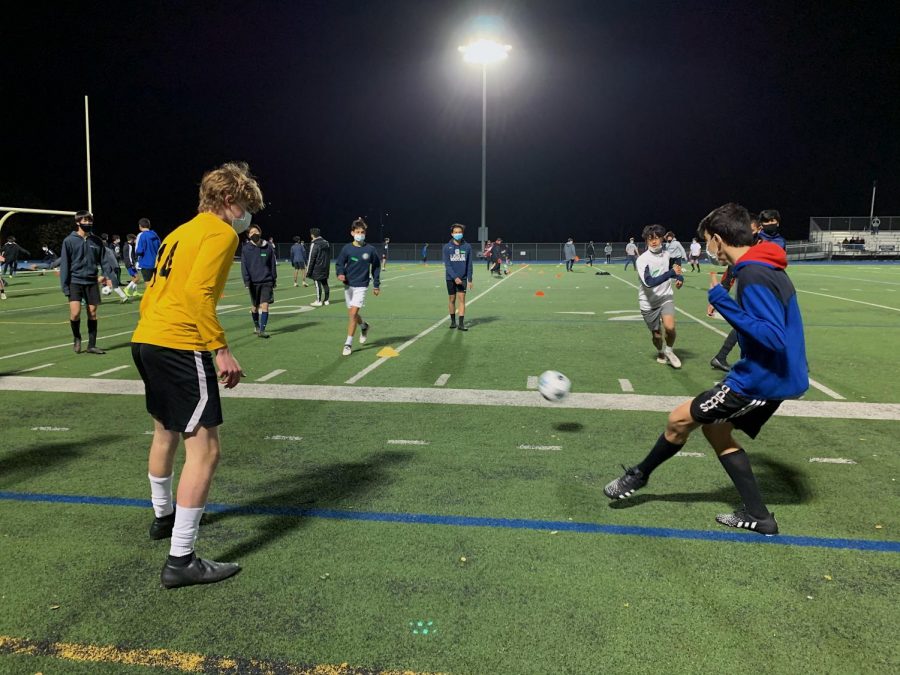 A group of freshman and sophomores pass the ball to each other during JV tryouts.

Student-athletes from all grades participated in the first day of soccer tryouts on March 15. The approval of tryouts for spring sports was the kickoff for the boys soccer season at Carlmont.

As spring approaches, soccer teams are itching to prepare for the upcoming season. However, due to COVID-19 protocols, many sports, including soccer, have been put on pause since last season. Despite the setbacks, the team continues to set and reach for its goals.

“It’s hard to treat this as a full season because it’s going to be so short, but we are going to make the best of this year. Our goal is to build a sense of continuity for the team, as well as give the seniors their last chance to play with us,” said Chris Zaino, the assistant coach for the varsity team.

During the first day of soccer tryouts, freshman coach Rui Dos Santos and JV head coach Ryan Freeman assessed the players trying out for JV, consisting of freshmen and sophomores. Dos Santos and other coaching staff evaluated the JV players’ performance in a series of passing games and more.

On the other side of the field, Zaino and varsity head coach José Caballero watched the varsity players try out. The players rotated through a scrimmage that tested their skills during a game as well as their sportsmanship. The varsity team is made up of upperclassmen and a handful of specially selected sophomores, who earn their placement through a recommendation from their coaches.

“I was fairly confident for today’s tryout because I knew there would be a chance for me to show my coaches my strong suits during the scrimmage and throughout the rest of the day,” said sophomore Daran Ebadi.

Despite the halt in Carlmont soccer over the past few months, many students like Ebadi have engaged in competitive youth (CY) club soccer teams outside of high school. This year, prior to tryouts, student-athletes maintained their form and skills through club practices.

Within the first session of tryouts, players began to navigate the field and become more familiar with their teammates.

“The drills are tiring at times, but during them, I like to see the other players’ skill level and understand their techniques. Also, tryouts give me the opportunity to make new friends each year,” said Ryan Jocson, a sophomore trying out for the JV team.

The kickoff of soccer tryouts has allowed the coaches to view the players’ progress and also develop an unspoken bond between the players.

Caballero said, “Everyone should carry this uniform with respect and be grateful for this wonderful opportunity. Most importantly, at the end of the season, we should be able to say that we gave it our all.”