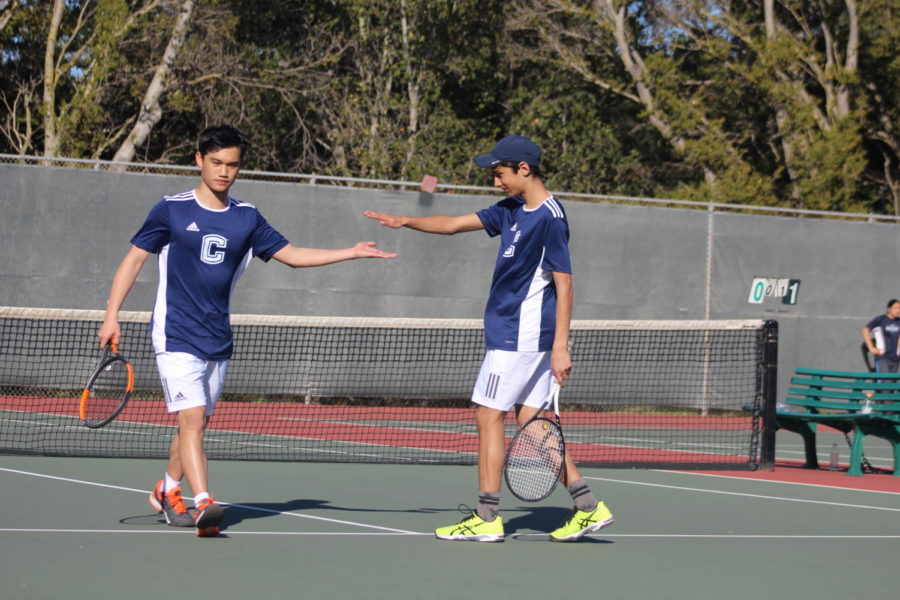 Jerry Lui, a senior, high-fives Iman Shafaie, a freshman, after a match.

The Carlmont Scots Boys Tennis team won a significant game on March 21 against the San Mateo Bearcats, 5-2. This match was an opportunity for redemption, and it was one that they capitalized on.

Exactly one week prior, the Scots traveled to San Mateo for a game. They lost by just one match, which came down to the wire. Fortunately, this game would be different. The Scots came to play, with the addition of teammate Varun Hegde, a junior. The team had found a winning mentality, eager to redeem themselves.

As a result of this attitude change, the whole team persevered. Jerry Liu, a senior, and Daniel Arakaki, a freshman, both came down with sickness comparable to Michael Jordan’s flu game, but they still pulled through with the tough circumstances.

Most of the matches won on Carlmont sides were straight sets, but one that stood out compared to others was a tough game for Arakaki. He started off down a whole set, but then he came back with striking force. He won two consecutive sets directly after that loss. His win of this match was essential for the Scots. It led them to their victory against the Bearcats.

The Scots’ record thus far, 4-2, is fourth best in the league. The overall talent has taken a hit since losing experienced seniors like Thomas Reznik and Nate Yeo, but they have clearly picked themselves back up and taken this in stride, considering how they just beat one of the best teams in the league.

The day had been streaked with comebacks, as eloquently put by Coach Dan Nguyen in his post-game huddle. With Arakaki, his perseverance and composure allowing him to come back and win the deciding match for the team, alongside the perseverance of other sick teammates. Other players, like team captains Milad Shafaie, a junior, and Chris Cho, a senior, won in straight sets, etching the Scots’ key victories for their team.

“It’s a great experience seeing the team win and we look forward to seeing who’s next,” Rohan Mantena, a sophomore, said.

Playing Menlo-Atherton on Tuesday, the boys are eager to test their skills again.