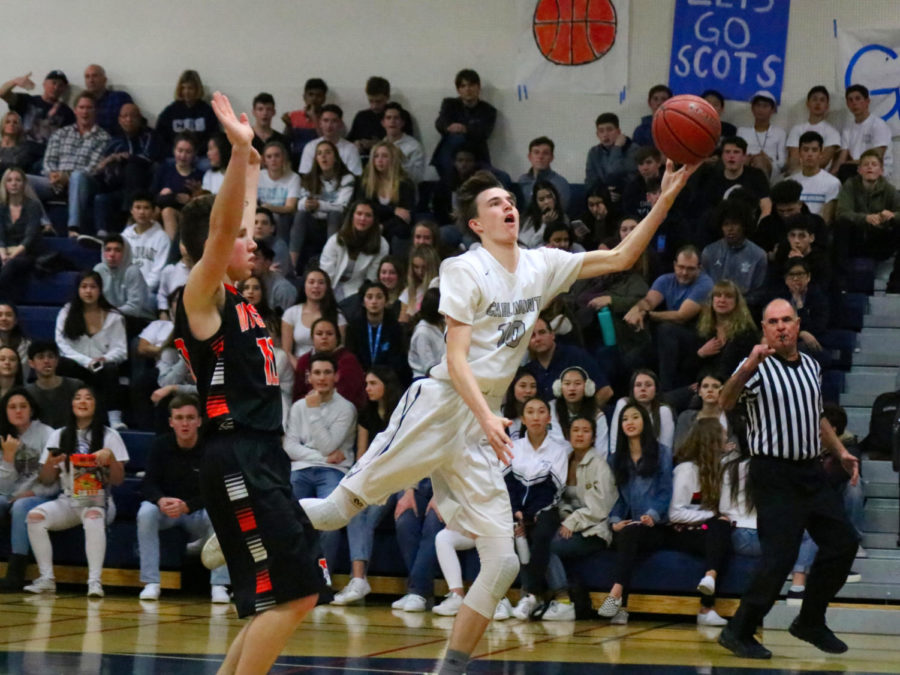 Jake Kennedy, a senior, throws up a shot after getting fouled by a Woodside player.

Cheers echoed throughout the gym as the clock wound down on the Carlmont Scots’ eighth league match against the Woodside Wildcats. The Scots (7–1) were leading the Wildcats (0–8) by a score of 75–34 when the final buzzer rang out.

Carlmont started the game off strong as Lajuan Nelson and Jake Kennedy, both seniors, scored 2-pointers to give the Scots a 4–0 lead. Two consecutive 3-pointers by Woodside, followed by a 2-pointer, allowed them to gain a lead of their own, however. The score rested momentarily: 11–7 in favor of the Wildcats.

The Scots quickly rallied back, with 2-pointers from Sammy Bean, a senior, and Nelson. Two free throws from Nelson, as well as a shot and free throw from Ben Ledwith, a senior, gave the Scots a 5-point lead.

Carlmont finished off the quarter with a 3-pointer from Bean alongside a layup buzzer beater from Nelson, moving the score to 21–11.

“As a team with nine seniors, we have a lot of experience in these kinds of games. We knew they weren’t going to roll over after the first quarter, so we tried to match the intensity we had been bringing during our first quarter run. We have a lot of guys that haven’t gotten a lot of minutes this year, so we wanted to get them in the game as soon as possible and made sure to take care of business as soon as possible,” Bean said.

The Scots wasted no time at the start of the second quarter, as Abram Guldbech, a junior, swished a three. This was quickly followed up with a steal and breakaway by David Bedrosian, a senior. This gave the Scots an early 15-point lead.

A timeout from Woodside would allow them to regroup and the Wildcats scored on their next possession. Carlmont and Woodside would go on a no-score streak for a large portion of the quarter, but this spell was eventually broken by Woodside, as they drew two fouls and added three points to their score. After a timeout from Carlmont, Kennedy drew a foul and gave the Scots one more point.

Woodside ended the first half with a 3-point buzzer beater, leaving the score at the end of the half at 29–19.

Carlmont would draw two fouls at the start of the second half, allowing both Nelson and Sho Takahashi, a senior, to give the Scots an extra three points.

A 2-pointer from Bedrosian followed by a strong block from Ledwith gave the Scots the ball again and allowed for Takahashi to score two. Nelson and Takahashi would add another four points and force a timeout from Woodside, with the score at 40–20.

Woodside slightly rebounded from their timeout, scoring a three on their next possession, but it gave way to a two from Guldbech. Zach Burgos, a senior, would draw a foul and add another two points to the Carlmont lead.

Whilst bringing the ball down the court after a rebound from Carlmont, Kennedy was hit by a defender and go to the line. After two free throws, Kennedy left the game with a mild concussion. He will be missing the next game against Hillsdale on Wednesday, Jan. 30.

After fouls on both sides, Elhihi hit a step-back 2-pointer to make the score 51–25. Guldbech finished off the quarter with a breakaway layup, which gave the Scots a 17-point lead.

“As the game went on, we began to rebound more and run our plays better which gave us more momentum and allowed us to take better shots,” Posey said.

The fourth quarter got off to a loud start, as Joe Seaman, a junior, scored five points to advance the Carlmont lead over Woodside. They were up 22 points.

Both teams went back and forth, with the majority of Woodside’s points coming from free throws. The bulk of the Scots’ points during this quarter would come from Elhihi and Posey, who combined for 12 points in the 10 minutes of play.

The final quarter would come to an end with two breakaway layups from Burgos, making the final score of the game 75–34.

As the Scots maintain second place in the Central Coast Section Division 1 bracket, they look forward to their CCS run.

“We don’t think much about rankings, who we’re playing, where we’re playing, etc. We just think about how we’re going to get better so that we’re best prepared to win,” Bedrosian said.

But this year has been special for the Scots, as the seniors have strong feelings towards such a successful season.

“[This season has been] beyond words. For most of us this season is going to be the last organized team basketball that we will ever play so it’s great that we can go out in a way that we will remember and be proud of,” Bedrosian said.