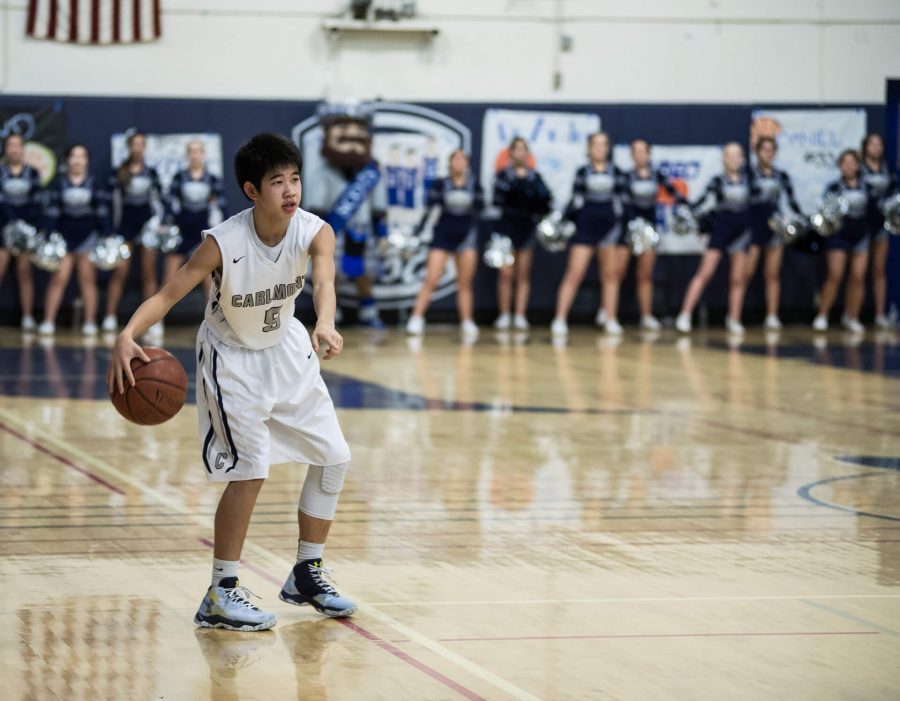 Sophomore point guard Sho Takahashi calls out a play in the first quarter as the Scots lead by seven.

Although the Scots got off to an eight-point lead out of the gate and seemed to have the momentum through the first three-quarters, they fell short.

The game started out fantastic for the Scots and the crowd was loving every second of it.

Nothing appeared to be going the Scots’ way; whether it be jump-balls or shots that couldn’t seem to fall.

Head coach Pat Smith said, “Unfortunately we missed a lot of close shots; it was like the rim was smaller than it usually is for us.”

The Scots had a four-point deficit going into halftime and the game seemed to just be starting.

The crowd was electric in the second half as the Screamin’ Scots came out in full force, filling the stands, and both the teams felt the effects.

Both Carlmont and Woodside missed a noticeable amount of free throws. The teams combined missed 20 free throws between them, but the Scots missed them in the crucial points of the game. Carlmont went four for twelve in the fourth quarter leaving eight points at the line.

Junior and center Jason Lloyd said, “We had a big problem with free throws.”

By the fourth quarter, the Scots had a one-point lead, and the fans had their fingers crossed that Carlmont could keep the lead through the quarter.

The game came down to the free-throw line and the Scots just simply didn’t make enough free throws.

The Scots blamed the loss solely on themselves.

Senior DeAndre Minor said, “We lost the game. We gave it away… no excuses.”

The Scots’ next matchup is at Aragon on Wednesday and it is expected to be another thriller.