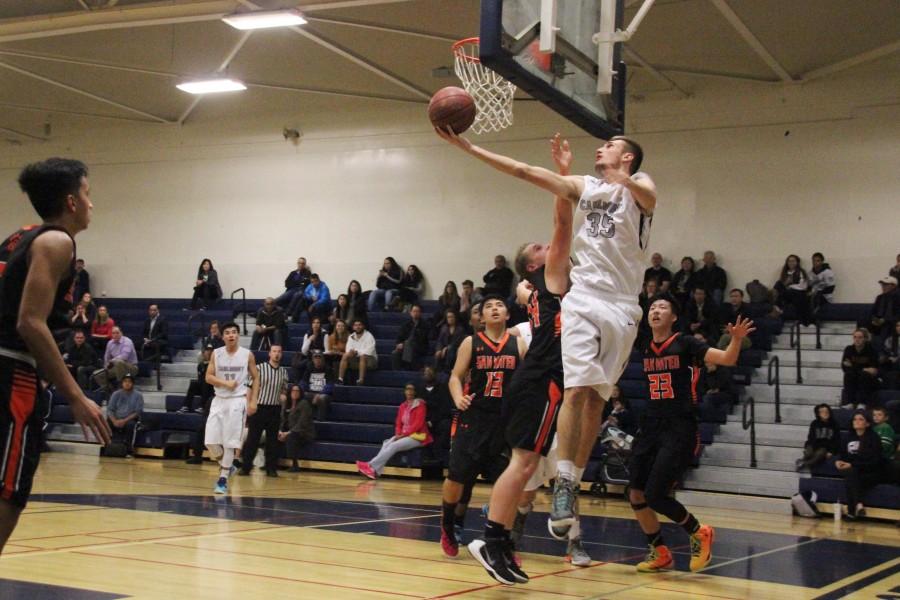 Lloyd reaches his arm out to the hoop from underneath the basket.

“Who wants it more?”

Head coach Pat Smith’s question echoed throughout the gym amongst the squeaking sneakers on the floor and the cheering fans in the bleachers.

On Jan. 20, boys varsity basketball played San Mateo High School in what at first seemed like an easy win.

The Scots started the first quarter with solid defense and offense. During the first half, the Scots held onto their lead, ending the half at 32-20.

“This team is all about energy and keeping it up throughout the game and coming out and forcing their will on the other team instead of letting it happen to them. As long as we keep our energy up, you’ll hear that in communicating and talking, and we’re okay,” said assistant coach Scott Jacobs.

Carlmont’s defense began to weaken with five minutes left in the game. San Mateo scored a three-pointer off of a turnover and another two points from free throws. Carlmont hung onto their two point lead at 39-37.

“We scored two points in the third quarter and 12 points in the fourth quarter. They were having trouble with their zone. Our defense kept us in the game. If you’re not scoring on offense, you have to play good defense, and our guys did that,” said Jacobs.

With two minutes left in the fourth quarter, San Mateo made two free throw shots, tying the game. Carlmont tried to pull ahead, but ran down the clock to two minutes without sinking a shot.

Both teams scored three-pointers to tie the game at 42-42 with one minute left.

With 45 seconds left, senior Andrew Carlsen scored a three-pointer and was fouled. He missed his free throw, and San Mateo grabbed the rebound to score a two-pointer. Carlmont fouled a San Mateo player who sunk the free throw, tying the game to 45-45.

The game went into a 4-minute overtime. With 17 seconds left, the game remained tied 53-53. With 9 seconds left on the clock, San Mateo had an open shot, but missed.

“We’ve had weak offense for quarters, but definitely not two quarters in a row. The guys know that if we have those lulls on offense we have to fight harder on defense to stay in the game, and that’s what they did,” said Jacobs.

The game went into double overtime and double bonus. The 4 minutes started with San Mateo stealing the ball but missing the lay-up.

Points from junior Jacob Lloyd and senior Tyler Brandenburg pushed Carlmont into the lead at 55-54. Two minutes into double overtime, San Mateo stole the ball and stole the lead.

Junior Daniel Zorb scored a free throw, tying the game 56-56. San Mateo grabbed the rebound, and took the lead at 58-56, but Lloyd tied it up again with two free throw shots.

“It was really stressful during overtime, because we knew we shouldn’t have been there, but at the same time we knew what we had to do, and we did it,” said Zorb.

With four seconds left in double overtime, Brandenburg took two free throws to win the game for the Scots with a final score of 60-58.

The Scots will continue to work on their energy for their next game against Sequoia High School on Friday, Jan. 22.