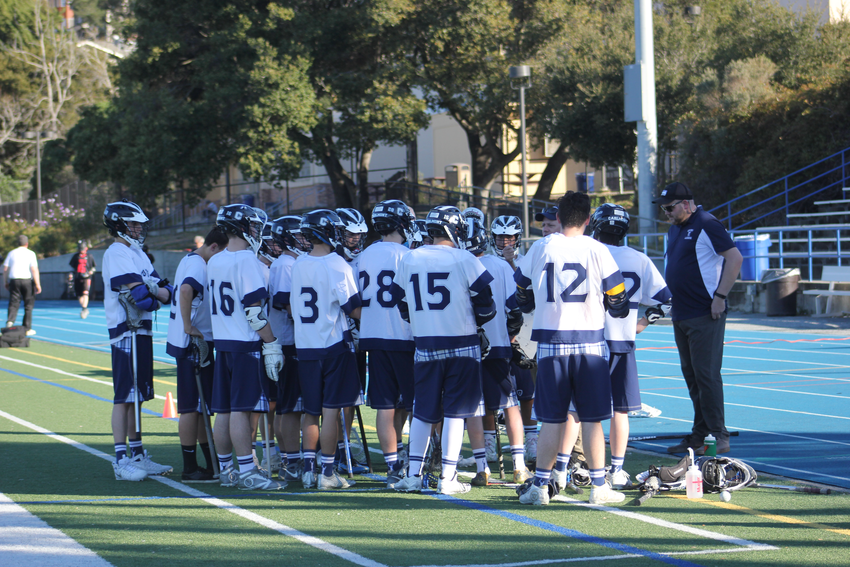 The Scots huddle on the sideline during their strong victory over Gunn.

The varsity lacrosse team took a commanding 14-3 victory over Gunn High School in their second win of the pre-season.

The Scots started the game with a faceoff win.

Coach Todd Irwin said, “We won today because we had a great faceoff game.”

This would continue throughout the game as the Scots won many of the following faceoffs due to the wing coming into support.

After the faceoff win the scots had possession for most of the first quarter, another key that Irwin said was the reason the scots won this game. This early possession lead led to a goal for the Scots by senior captain Luke Cadona.

Later in the first quarter, the Titans tied it up with a goal from sophomore Peter Christians. This would be the only goal the titans scored until late in the game.

After the Titan’s goal, Carlmont stepped up their game scoring three more goals in the first quarter. This ended the quarter with a score of 4-1.

The score only improved from here as the Scots managed to score three more goals in the second quarter. The Scots were dominating the Titans defensively and offensively throughout the first half.

The fourth quarter was the best for the Titans as they picked up two goals but still did not change the outcome of the game.

The game ended 14-3 and the scots picked up a well-earned victory.

The offense played particularly well that game as Cadona said, “the offense moved around a lot and connected a lot of passes and the new additions on the offense will be able to score a lot more.”

Cadona scored a total of six goals and lead the scoring for the scots.