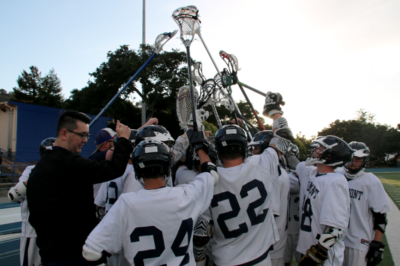 The boys lacrosse team raises their sticks at the end of the game.

After the 2017 season, the boys varsity lacrosse team holds second place in league standings, only behind Burlingame.

With the season over, the team has taken time to reflect on how they did on completing their goals and beating their rivals.

“The goal for our team was to win. There were little things here and there that we worked on as a whole but for the most part, we all worked together really well and all that was left for us to work on was to win the games,” said Harris Branch, a junior and lacrosse team member.

The Scots had an overall record of 9-6 with a league record of 6-2. They may not have won the division, but they did become a better team.

“By the end of the season, we were all connected and were thinking as a team and not as players. The only thing that would have made it better is by winning the division,” said Roey Netanel, a junior and lacrosse team member.

With their current second-place standings in mind, the team looks forward to further improvement when the next season begins.

“Next year, I want to be able to work as a team. When I would watch JV play, they barely passed and have one person run the ball the whole time. I don’t want that to happen on varsity,” said Netanel.

This desire for further improvement also stems from the fact that the team has a longing for victory and a need for recognition.

“The goal for the team next season is to get first place in the league,” said Branch

As the season wrapped up, the Scots looked back at their only two losses in the league season; one loss was against Aragon and the other was against Burlingame.

The Scots lost by a combined three goals in their two losses. In both of those games, they were fighting until the last second, proving that they are right on the edge of victory against these two teams as well as in the league.

The team believes that next year they will be ready to win every game.

“We were very close. If we put a little more heart into it and worked on our stick skills, we could have won,” said Max Ildefonzo, a junior.