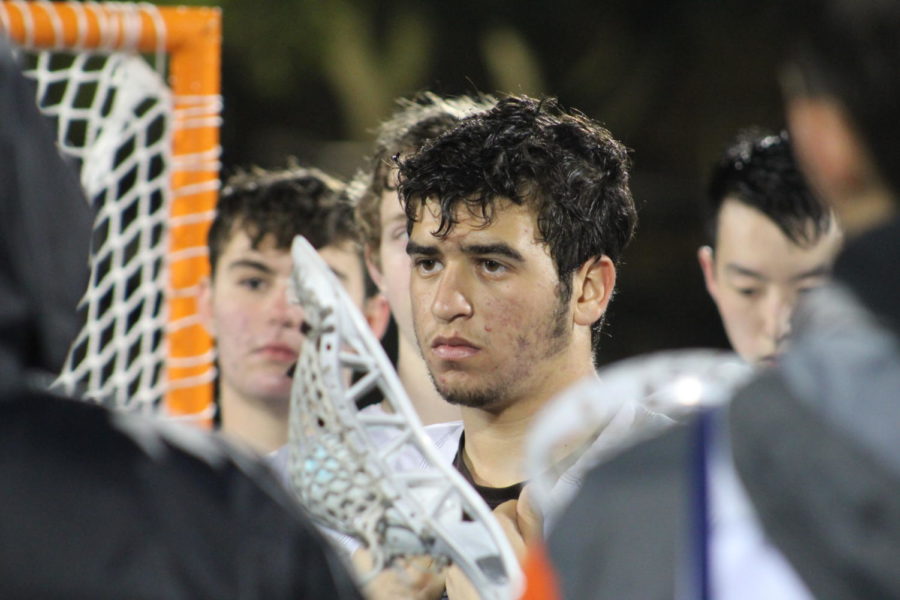 The boys' varsity lacrosse team listens as their coaches give input on their defeat against the Los Gatos Wildcats.

Ranked number one in PAL, Carlmont’s varsity lacrosse team experienced their second loss of the season against the Los Gatos High School Wildcats on March 15.

At first glance, it may have seemed like an easy win for the Scots as they had previously won four games and only lost one, while the Wildcats had only won one game prior to Thursday’s match.

“We’re in a little bit of a losing streak,” said defensive coordinator for Los Gatos, Ryan Black. “We played against a lot of strong teams at the beginning of the season, but hopefully what we have been working on at practice translates in the game.”

Carlmont, on the other hand, has played against local teams that many players consider some of the “easier” opponents. However, since the two teams had never played against each other before, the game’s outcome was uncertain.

The Scots displayed a strong performance at the beginning of the game, ending the first quarter 2-1.

According to one of Carlmont’s varsity lacrosse coaches, Dan Koopman, even though the team started off strong, they were not able to keep up the pace after the first quarter.

“Our offense was good in the first half,” Koopman said. “We were moving the ball around and making some good passes, but because we have injured players we had fewer subs than we usually do so a lot of the guys were getting tired.”

As it began to rain during the second quarter, it became clear that the once quick and focused Scots were beginning to slow down.

Sensing their opponents’ decreasing momentum, the Wildcats sped up. With their strong offense and defense, they were in the lead by halftime with a score of 6-2 and ended the game 8-2.

Ryan Fogerty, a junior and defender for the Wildcats, was happy with how his team played and believes their defense played an important role in the outcome of the game.

Despite their loss, the Scot’s remain optimistic and hope to use the game as a learning experience.

“We were playing well,” said Lucas Becker, a senior at Carlmont. “They got ahead of us in the second half because of how they were moving the ball around […] They were really aggressive, but they are not that much better than us. We were just not playing our best.”

Eric Swanson, the captain of the Carlmont’s varsity team also feels that the Scots lost due to their inattentiveness.

“I thought we started off pretty strong and were definitely putting good effort in,” Swanson said. “But by the time the half came around we just weren’t putting in all the work and we weren’t focused enough so we let it slip away.”

Rather than seeing it as just a loss, Swanson hopes that the outcome of the game will help the team grow.

“I definitely want to see our players bounce back and focus more at practices so we can improve,” Swanson said. “I think it’s been a good season so far. We have a good group of guys and we’re just hoping to have a good season this year.”