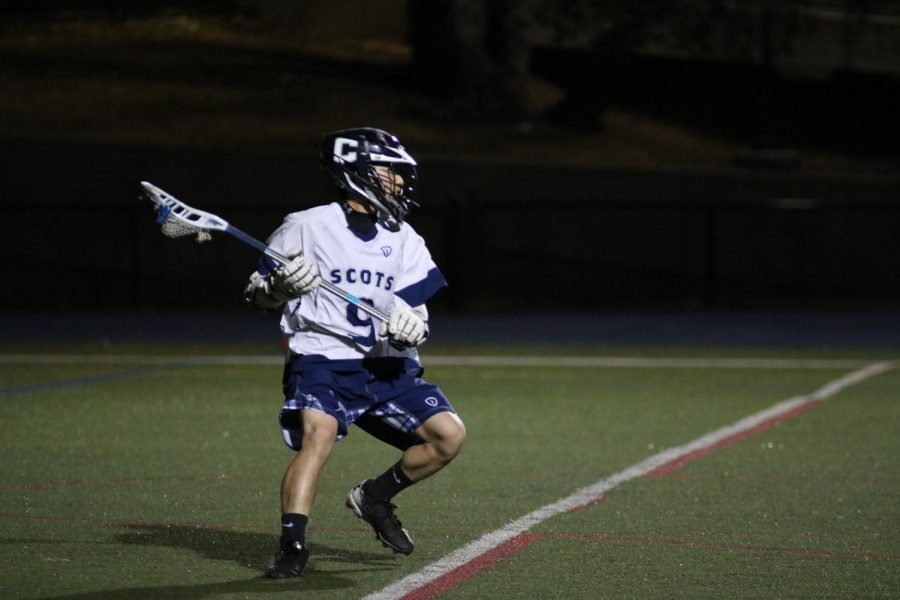 Cameron Wat, a senior, prepares to pass the ball to his teammate.

In the first match of the season against Pioneer High School, the Scots took home a substantial victory, defeating the Pioneers 15-6.

Out of the gate, the Scots had a strong lead, scoring six points in the first quarter alone. By half time, the Scots kept their scoring momentum and had nine points to Pioneer’s three points. Despite their dominance in the first half, Carlmont kept up the intensity to finish the game 15-6.

Carlmont’s victory is primarily attributed to the strong skills they demonstrated during the game, according to coach Michael Leavitt.

“We did a good job possessing the ball, so defense only had to do the work they had to do, and they did their work and cleared the zone nicely. We maintained control most of the game. It was a good effort by Pioneer, but it felt like we were doing a good job,” Leavitt said.

“We had a lot of assistant goals, we moved the ball around well, and we possessed. We also played good defense without getting a lot of penalties, and we were able to get a lot of our shots on target,” Douglis said.

Despite Carlmont’s strong performance, there are some improvements to be made throughout the rest of the season.

“The biggest thing that we need to do is always knowing where our spacing is on offense and having a full rotation of the men when they’re down,” Leavitt said.

Pioneer also faced some struggles during the game as Dylan Flemming, a sophomore at Pioneer, can attribute to.

“Our team is a little hurt, but we’re dealing with it,” Flemming said.

According to Flemming, this is the second year that Pioneer has had a lacrosse team, so they are still a relatively new program. Carlmont’s team this year is comprised of many junior members.

“This is a junior heavy team. We only have a few seniors, and we probably have more sophomores than most varsity teams,” Leavitt said.

“We got new players coming up from JV, and they’re playing really well,” Blackwell said.

Carlmont demonstrated strength as a whole team, but two players, in particular, stood out to Leavitt.

“Trevor Douglis controlled offense for us and passed it around. The defensive unit worked really well together tonight, and they were their own star. You could see how much speed Ryan [Irwin] had and how he controlled the bass backs,” Leavitt said.

The next game will be an away game against Sequoia on March 5.

“The next game is going to be fun, as Sequoia is always a rivalry game. We’re looking forward to playing that next game and doing the best we can,” Leavitt said.