Boys’ varsity soccer comes out on top against Aragon, 3-1 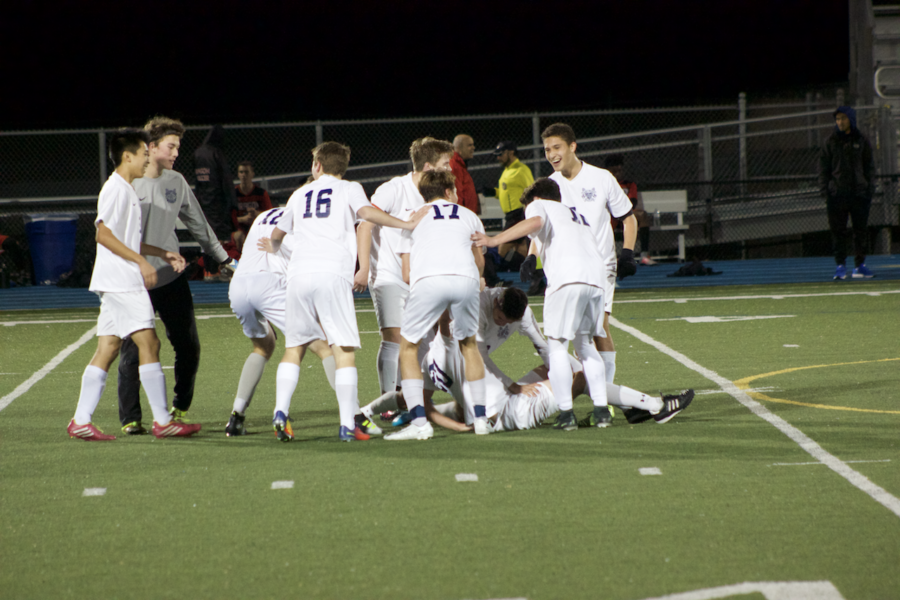 The Carlmont team celebrates on the field after a goal.

Aragon was defeated by the Carlmont boys’ soccer team after Carlmont’s big comeback in the second half.

The game started off with Carlmont in possession of the ball. From there, it was a cycle of both teams attacking one another’s goals. This back and forth was how the game went until Aragon scored the first point of the game within the first half hour. Aragon’s strong defense proved to be a problem for the Carlmont boys.

“[The Aragon team] didn’t make it easy. He [the Aragon team’s coach] got stretched trying to go for the win and we were able to get it,” said Will Stambaugh, Carlmont’s head coach.

Once halftime passed, there was a long, rarely broken, stalemate at the Aragon goal that had Carlmont pushing but never getting too far. There was a time when the fans of the Scots were cheering loudest and the team advanced to the goal, made their shot, and the Aragon goalie tipped it out of bounds. Groans emitted from the crowd and the Scots took a corner kick, which yielded a play that resulted in another corner kick.

With time remaining, the Scots scored a goal against Aragon, which was all they needed to get back on track. This was met by a roar of applause from the Carlmont supporters.

“It was a rough start, they led and we got kind of nervous, but we picked it up, scored a goal. Once we scored the second goal we were just motivated to get more,” said player Matthew Matias.

After this first goal, the Scots regained their confidence and pushed even harder to get the win.  Their persistence ended up paying off when they scored another two goals in only a few minutes, and they came away with the two-point advantage.

“I think we started out a little slow, but we built up as the game went on,” said team captain Ben Zaino.

The next game that the varsity boys will have will be against Hillsdale on Jan. 31 at 4:30.