Boys varsity soccer comes out victorious over Half Moon Bay 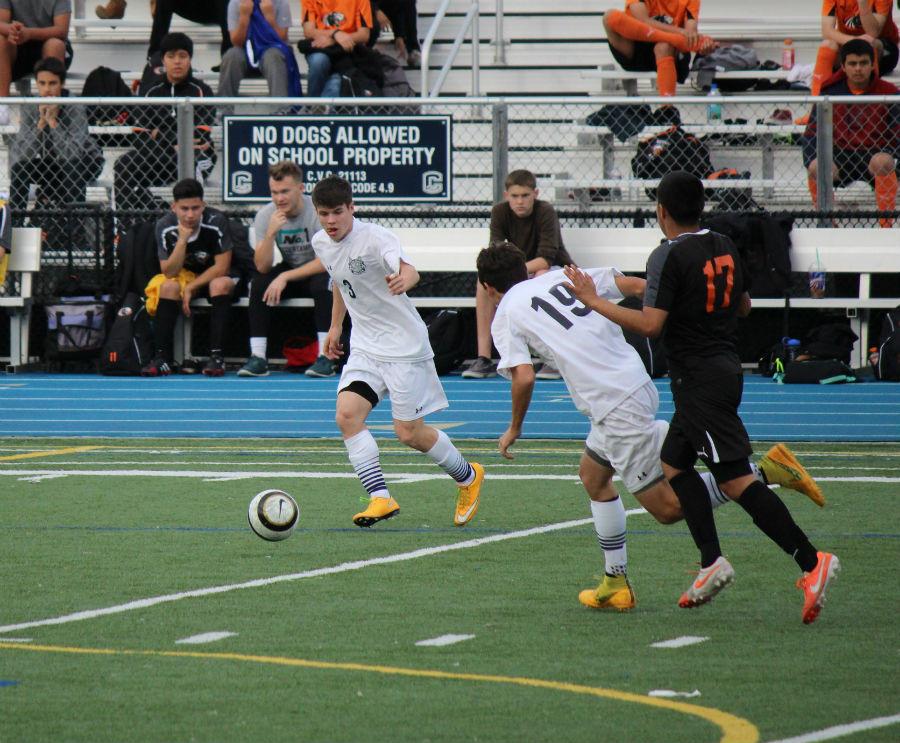 Carlmont Boys Varsity wins against Half Moon Bay with a score of 3-0.

After losing against Half Moon Bay 1-0 in the beginning of the season, the boys varsity soccer team was committed to coming out with a win on Wednesday, Feb.11.

The beginning of the first half was a battle between defenses and offenses as multiple attempts towards the goal were made. With a little over 20 minutes left in the first half, junior Foster Kupbens scored to give his team the lead.

With the motivation that Kupbens gave them, Carlmont was determined to keep going and fight for the win. With less than a minute left in the first half, junior Max Storozhenko scored, ending the first half with a score of 2-0.

The second half was a fight to the finish for Carlmont, but a struggle to catch up for Half Moon Bay. There were attempts made by Half Moon Bay toward the goal, but Carlmont’s goalkeeper Jacob Segal was there to stop them. With less than 20 minutes left in the game, junior John Bran scored to bring the score to 3-0.

Closing in on the end of the second half, freshman Noah Sanchez scored only for it to be called off-sides.

The game ended with boys varsity beating Half Moon Bay with a final score of 3-0.

With the beginning of the season starting off rough, the boys varsity team has proved their ability to improve.

Kupbens said, “We definitely had a lot of really good passes and one-touch stuff through the back. We’ve had some problems with trying to send it straight up, but we did a lot better. We also got a lot more shots than we usually do which helped a lot with shooting goals.”

Even with the impressive win, the team is accepting of their flaws and are determined to improve.

“We had a lot of opportunities that [we missed]. I think the [referee] should have been better. We had too many turnovers, but overall we won. A win is a win,” said Storozhenko.

The team is also looking to continue their hard work in order to come out on top next week in their last two games of the season.

Bran said, “We came out and played with heart. We took every opportunity to finish, and we did. I’m hoping that we play as a team and come out with wins in our games next week in order to make CCS.”

Boys varsity’s next soccer game will be at Carlmont against South San Francisco on Monday, Feb. 16 at 4 p.m.