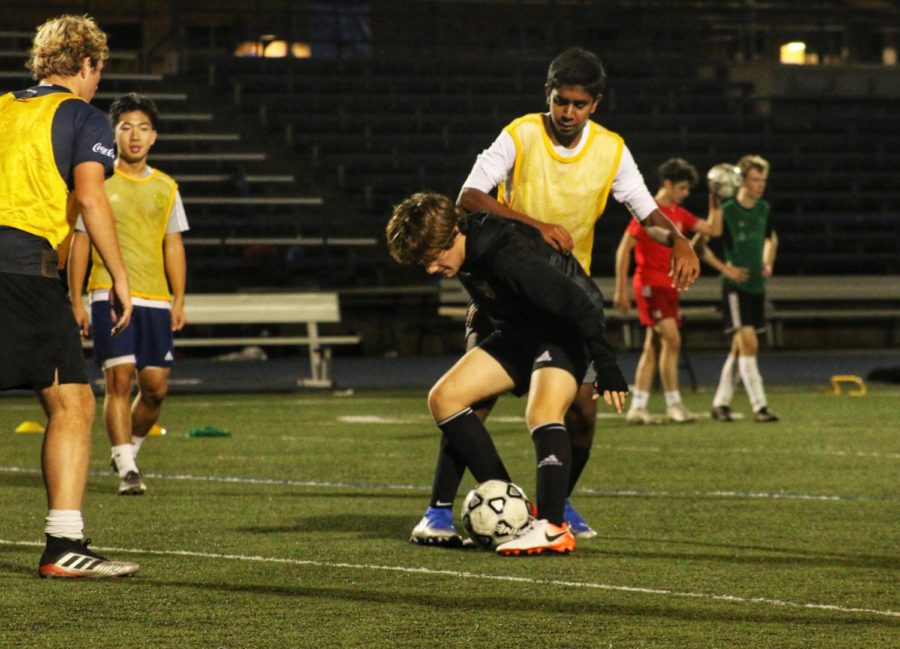 This winter season, tensions were high at the 2019 boys varsity soccer tryouts with 43 boys trying out, and only 26 of them making the team.

The overarching goal of tryouts is to assess the player’s individual capabilities as well as the dynamic they bring to the team.

The reasons people are nervous come in many forms.

Players trying out for varsity for the first time often feel the most nervous.

In comparison to last year’s JV tryouts, sophomore Hayden Pendleton said, “JV wasn’t too difficult last year, but varsity is more physical and has bigger kids, so I was more nervous.”

His nerves didn’t stop him from playing to his full potential. He started tryouts a little shaky, but as time went on, his confidence built, and he was able to perform at the level he wanted to.

This confidence didn’t come out of nowhere. In the offseason, Pendleton put in as much work as he could with his club team, Juventus.

Sophomore Johan Romero felt satisfied with his performance at tryouts. “I felt confident honestly. If I played how I usually play, I know that I can earn a spot on this team,” Romero said.

Saklikar’s confidence comes from the fact that he was a starter last year on varsity, and he has his spot locked in as goalkeeper as well as captain.

No matter the level of nerves each player had coming in tryouts, they can all agree on one thing. A good team needs chemistry.

Coaches and players can see that this year’s group of players already has a very strong chemistry.

In comparison to last year, “Seniors ran the ship, they told everyone what to do, and they would just follow. But this year, there is a lot more chemistry between the grade levels,” Suklikar said.

Chemistry on and off the field is crucial to the team’s success. With this bond, the players can understand each other’s playing style. When the team can connect well off the field, playing becomes more enjoyable, giving them a higher chance of winning.

“Chemistry. Being as one and having fun with each other is what makes a good team,” Romero said.

Last year’s varsity team made it to CCS without the chemistry. This year’s team has both skill and chemistry, making the coach very convinced that they will make it to playoffs this upcoming season.