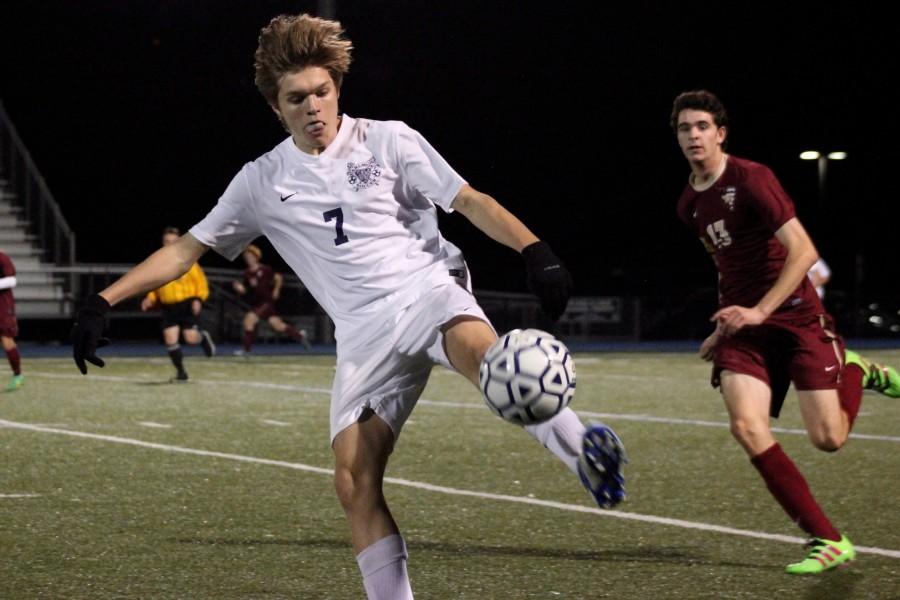 Senior Max Storozhenko reaches for the soccer ball as a Menlo-Atherton defender advances towards him.

Emotions ran high as the Scots walked off the soccer field to hang up their blue and white jerseys. For some, it would be the last time.

On Feb. 19, boys varsity soccer honored their senior players as they played their last league game of the season.

Friends and family came to support the seniors. The players received posters, candy leis, and flowers.

The Scots played against Menlo-Atherton (MA) High School. Twenty-three minutes in, MA scored the first goal of the game to put them in the lead.

Senior Blake Collins was fouled 43 minutes into the game due to an illegal tackle within the penalty box. The Scots were awarded a penalty kick for the foul, which was converted into a goal by junior Brett Fitzpatrick.

“It felt pretty good to score the goal. It was right before the half, so we all were in a good mood entering the second half,” said Fitzpatrick.

Four minutes later, MA brought the ball down to Carlmont’s defensive side on a breakaway. Goalie senior Camron Dennler dove for a save, but as the MA player went for the shot, he kneed Dennler in the face and broke his nose.

Dennler is out for the rest of the season due to the injury, but he will be on the sidelines to support the team during Central Coast Section (CCS) games.

The Scots lost to the MA Bears with a final score of 4-1.

“It was a pretty intense game. You could tell that both sides wanted it a lot. I know we could have played a better game and it was unfortunate to take a loss, but we’ll be ready for the Division 1 tournament next week. We’re prepped to go in guns blazing,” said Dennler.

The Scots are seeded sixth for playoffs. They will play eleventh seed Everett Alvarez High School on Wednesday, Feb. 24 in the first round of the CCS playoffs.