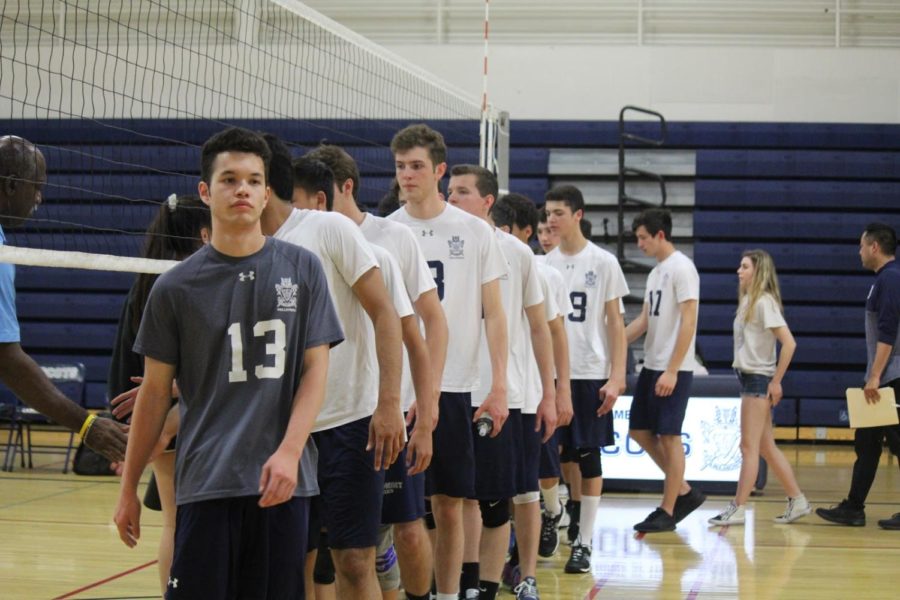 In the spirit of sportsmanship, the team gives high-fives to the referee after their game.

The Scots took a 3-0 victory over the San Mateo Bearcats  after keeping control of the score for the entire game.

The first set quickly proved that the Scots were the dominant team. They started off with control of the game and only furthered their established lead throughout the set. There were few times when the San Mateo team came close to making a comeback against the Scots. This allowed the first set to be easily taken, with the final score of this set being 25-11 Scots.

“I think we really enjoyed ourselves this game, and it was good to play against a team that is very solid, but [it was] definitely something that we could easily pull off,” said Jonah Przybyszewski, a junior.

During the second set, the teams were back at it again. The Scots started off with a huge lead, due to multiple aces by Przybyszewski. The five-point streak that he started gave the Scots the power early on. There was a short period in which the Bearcats closed the score gap, making it 20-11, but the Scots only needed five more points to take the set and they got them. Carlmont closed off the second set with a score of 25-14.

“We managed to keep the lead to as much as 10 points,” said Ezekiel Licudine, a junior.

Once the third set started, the Scots once again established an early lead, 7-2. As the set progressed, the Bearcats began to make a comeback, closing the score gap to only four points, 14-10.

Despite how close the Bearcats made it, they were not able to keep it up. The Scots put the score and momentum of the game in their favor, 17-9. They won the last set with a score of 25-17.

“The only challenge we’ve had is Menlo and Aragon,” said Licudine.

The Scots had won all the sets necessary to declare a win and went off the court, happily talking with one another as the JV teams came onto the courts and began warming up for their game.

“I think we’re more experienced [this year] because we have a lot of returning players from last year and the year before,” said Mike Lapuz, the head coach.