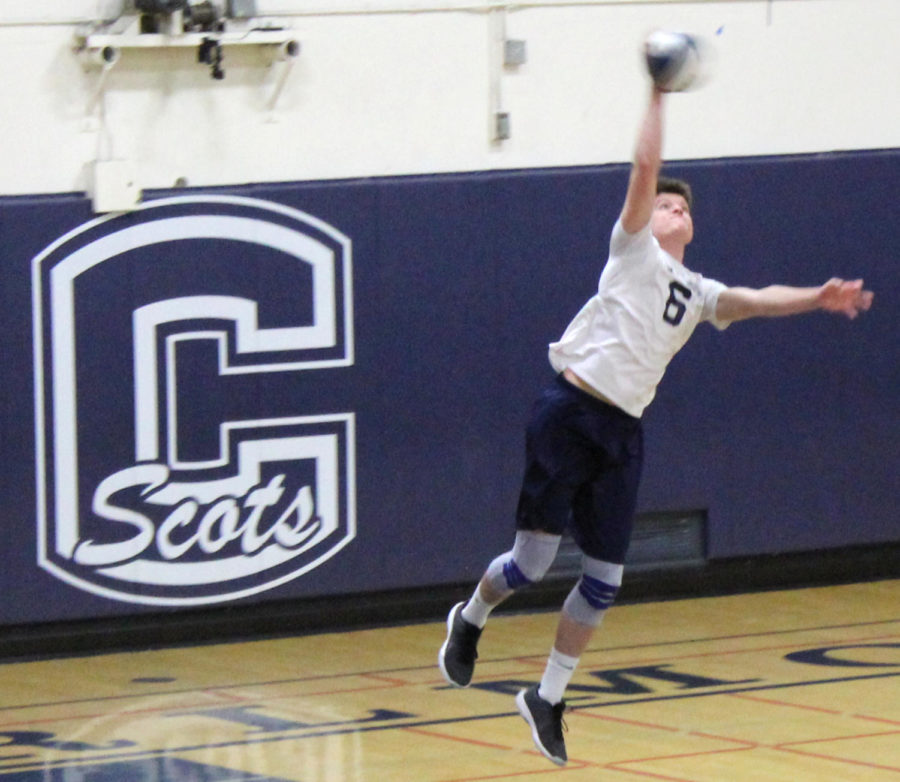 Ethan Mayoss, a junior, serves the ball during the first match

At 6 p.m. on Friday, March 15, Carlmont boys varsity volleyball experienced the classic athletic blunder: a rise against all odds followed by a disappointing loss. After winning their first match, the boys lost the next three matches against the Junipero Serra Padres.

“It’s just them (Serra Padres) being a tough team, so we gave it a better effort,” said Justin Wang a sophomore.

That first match had a score of 27-25, Carlmont. They started off behind against the more experienced team but then managed to tie it up towards the end. Pulling through in the final minutes, they eventually won.

The second match, being as tough as the first, the Scots lost with a score of 27-25, Padres. The unfortunate, close blunder tied up the score.

In the third match, it appeared as if the Scots were losing hope and getting tired as they played. The score reflected so as well. The match ended with a score of 25-11, Padres.

During the fourth match, the Scots started off strong and were determined to win. That would ideally force the playing of a fifth match. But once again the Padres won with a score of 26-24.

It was a disappointing loss after the hopeful first match. The team, however, took more from the game. They had gained a learning experience.

“The teamwork on the court was the best we’ve had all season because I feel like playing against a tougher opponent brings everyone together because we need to play harder,” said Kyle Lau a junior.

Especially since boys volleyball is such a young program, it helps for them to be having to play against tough games that help demonstrate their abilities and progress.

“We had a lot of turnout with the audience and parents so we did have support,” said Wang.

Even though they lost, their spirit is not lost. They earned some good experience and now they know what they need to do in order to improve.