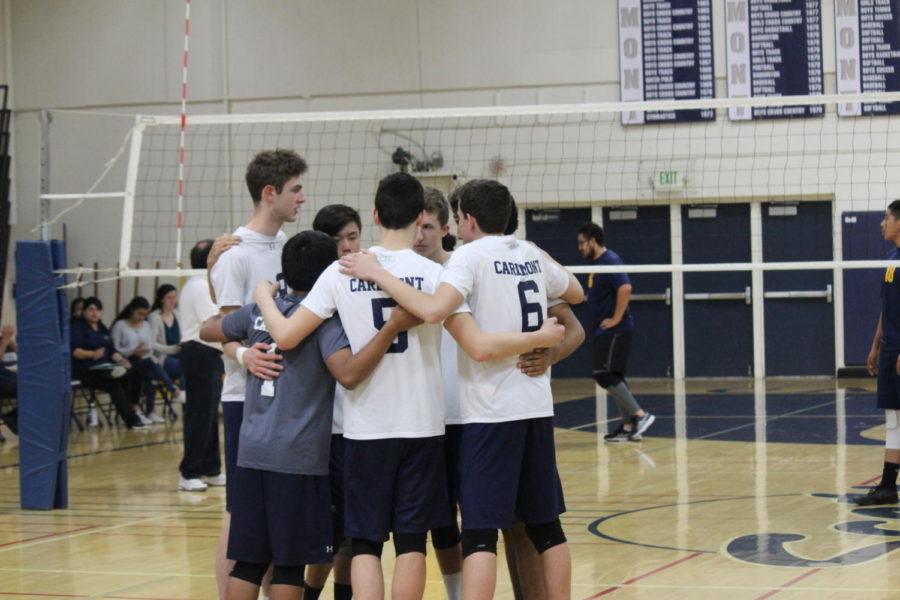 The Scots came out with fire to punish the visiting Eagles with a sweep.

On March 8, Carlmont played a non-conference game against Everett-Alvarez High School from Salinas.

The two teams had previously met on Feb. 22.  That game also resulted in a 3-0 win for the Scots.

In their final non-conference game of the season, Carlmont looked to take advantage of a team that seemed less prepared.

The Scots did just that by coming out with a tremendous amount of energy, giving them a 15-8 lead midway through the first set.

However, Everett-Alvarez would not go down without a fight. They were able to string together five consecutive points, causing them to be down by just one point.

Carlmont did not hesitate by coming up with three straight points of their own to give them the first set, 25-21.

“I thought the performance tonight was great, but we still have a lot to work on heading into league play,” head coach Michael Lapuz said.

The Scots were not able to maintain the momentum going into the second set as the Eagles kept the game close.

Poor communication also contributed to the Scots’ struggles as they let many balls fall to the ground, often with two players colliding to try to get the ball.

“I think this game shows where we need to work on because we didn’t play too great,” said Kazim Haider, a senior.

The sloppy play from both sides would continue later in the second set.

It wasn’t until the end of the set that both teams were starting finding their groove, with Carlmont able to finish off the second set with a narrow win of 25-23.

With the Eagles down two sets to none, they looked to gain momentum starting in the third set.

Trying to avoid another sweep, the Eagles were able to put together many great possessions that tested the Carlmont defense. Carlmont often had to dive at full-stretch just to save themselves from giving up a point.

It seemed as though the Eagles could avoid the sweep, but Carlmont was in no mood to let the visiting team win the set.

Carlmont finished the set with a score of 25-22.  The final set win gave Carlmont the match victory 3-0.

“The team we played against was very scrappy and I feel like both teams showed a lot of effort tonight,” said Jimmy Rudger, a senior.

With this win, Carlmont finishes their non-conference schedule with a record of 5 wins to 3 losses.  They will begin league play on March 9 against archrival Menlo-Atherton.