Boys’ varsity volleyball suffers a disappointing loss against the Dons 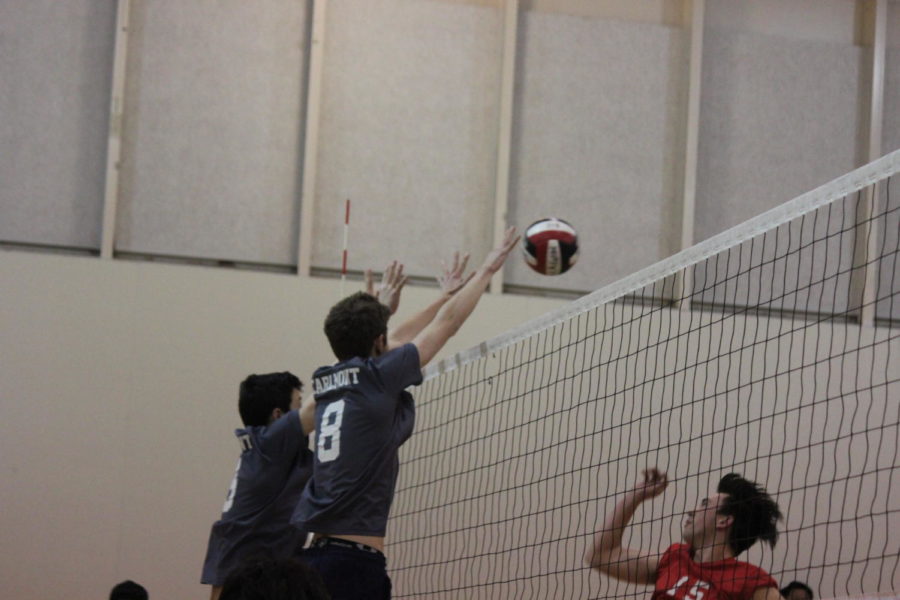 Junior Max Jung and Jimmy Rudger, a senior, go up to block an Aragon player's hit.

Smack! The libero dives for the ball, but it’s too late.

“We need to start cutting more people,” said a player who wishes to remain anonymous, annoyed at how the game ended.

The game started off with Carlmont making a few hitting errors, which put the Dons ahead 5-1. The Scots tried to catch up, but Aragon kept finding the holes in their defense and got more kills.

In an attempt to close the gap, Jonah Przybyszewski, a senior, got an ace on his serve, making the score 10-7 with the Dons still in the lead.

Both teams had powerful hits, but Carlmont needed to work on their passing as they kept on shanking the ball. As Aragon pulled away, Przybyszewski got a kill off of a dump, trying to keep the Scots in the game at 19-13.

“We needed to improve our positioning in the court. If we were watching their hitters to predict where the hit was going, we would have been able to pass correctly and minimize the errors,” said Ezekiel Licudine, a junior.

The second set began with Carlmont getting the first point and wanting to win this time around. It looked achievable as the teams were neck-and-neck with each other, with the score tied at 5-5.

As Aragon tried to pull ahead, they shanked a ball that hit the ceiling, but were still able to play it and ended up getting the point to make the score 9-7.

Halfway through the game, Przybyszewski got another ace, but the Scots lost the next point from a missed block.

Although Carlmont fought hard, Aragon emerged victorious with a score of 25-21.

As the third set commenced, Aragon got the first three points off of the Scots’ mistakes, leading Coach Mike Lapuz to call a timeout.

“They weren’t in the right mindset. They were letting things go, they were trying to rely too much on each other as opposed to taking initiative to do their part in the game,” Lapuz said.

In an attempt to catch up to the Dons, senior Jimmy Rudger spiked the ball into the middle of the court, known as “campfire,” and got a kill, rallying up his teammates.

But their sudden burst of energy and excitement was short lived as the Scots let a ball drop with no touch because of their lack of communication. At that point, the score was 11-4, Aragon in the lead.

As the game was coming to a close, Rudger got two more kills, but the Dons responded with two aces with a score of 22-13 Aragon.

Right on game point, the rally got halted when the referee noticed that Przybyszewski was on the gym floor not getting up. It turns out that he jammed three of his fingers while trying to block an Aragon player’s hit. Przybyszewski decided to stay in the game to play for the next few points and the audience clapped for him.

The referee replayed the point and this time, Carlmont got the point. But shortly after, the Dons got the final point and ended the game at 25-17.

“The team needs to work on communication, trust, being aggressive, and knowing where to serve and when to tip,” Lapuz said.

Their next game is a home game against Mills High School on March 21 at 6:30 p.m.