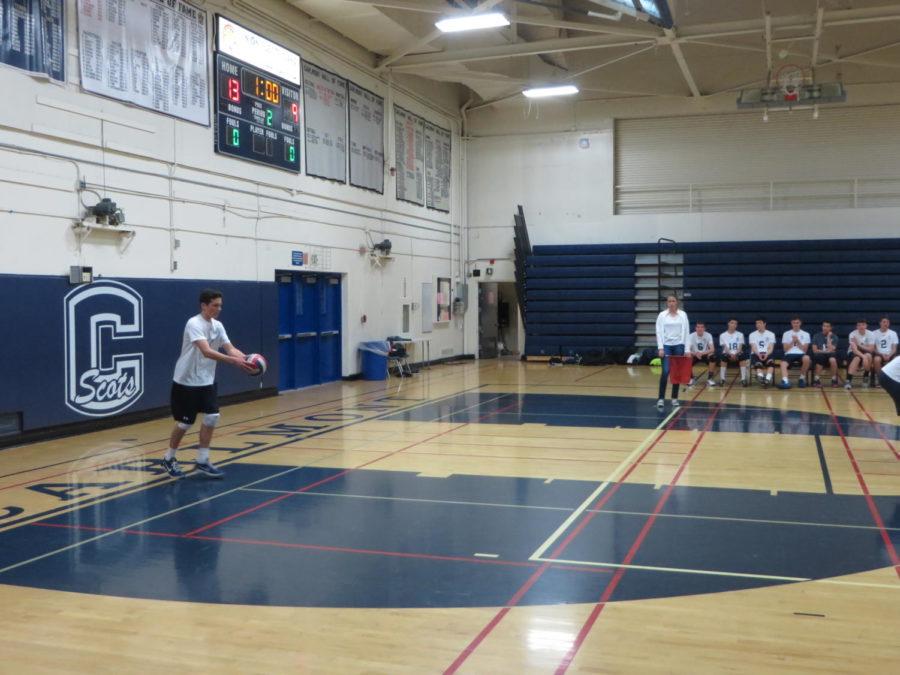 Miles Ozorio, a freshman, gets ready to serve the ball.

The Carlmont varsity boys’ volleyball team has an unbroken chain of victories against the Capuchino Mustangs.

The first set was a quick one, as the Scots dominated with a lead well over a 10 point lead at the close of the set.

The second and third sets proved to be more interesting because they didn’t end with large point gaps.

“Throughout the rest of the other two sets, we were trying to innervate different lineups to give some play time, primarily for some of the younger underclassmen,” said Mike Lapuz, the head coach.

During the second set, the score was kept more consistently close than it was in the first set. This set had the Mustangs with the lead, 15-7. After multiple streaks of consistent scoring, the Scots brought the gap to much closer 14-20. Then, in what proved to be the longest streak of scoring for the entire game for the Scots, the scoreboard read 24-23.

“We tried out some new players, so it didn’t go as well as it could have,” said Isaac Troy, a sophomore.

However, throughout the game, there were many words of encouragement from both sides of the gym. Though the Scots started off with more words of encouragement and cheering for their team, the Mustangs caught up with time and energy. Whenever the score came close, the tension could have easily been cut with a butter knife. The team that ended up pulling ahead was rewarded with cheering and even more positivity from their teammates.

“I think our team is a lot more dynamic and athletic than some of the other teams, especially in the middle position,” said Jonah Przybyszewski, a senior.

In the third and final set, the outcome of the game seemed to be in the favor of the Scots, but there was not as much certainty. As the game progressed, the score became closer and closer, the tension in the crowd rose. One point ended the set and the game, making Carlmont the victors.