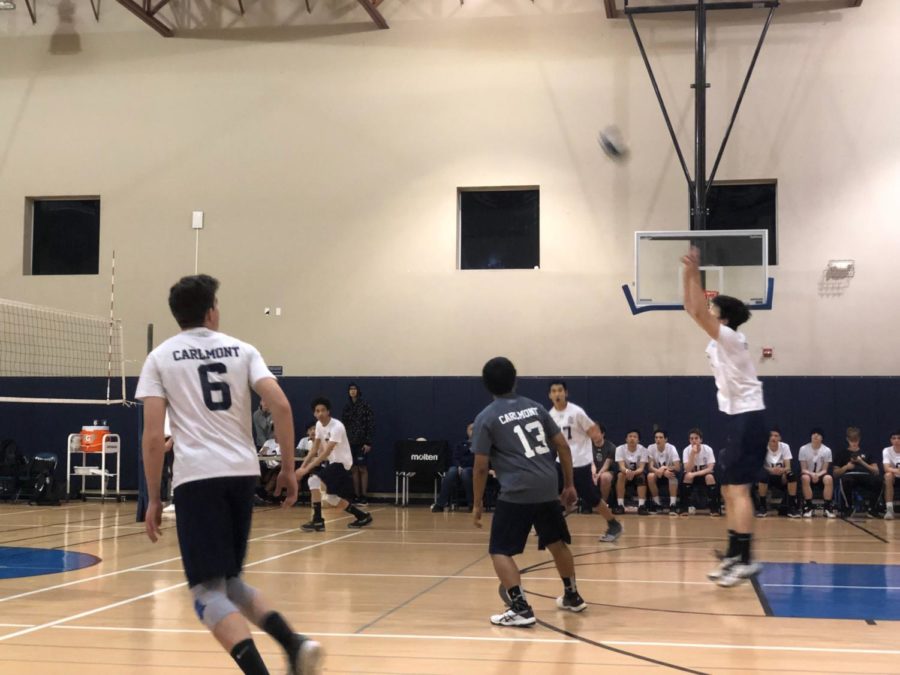 Max Jung, a senior, sets the ball from the back row.

The Scots dominated on Friday night in a crushing 3-0 win over the Menlo-Atherton (MA) Bears.

Carlmont started off the game neck and neck with MA, but eventually created a strong lead. Ryan Tomita, a sophomore, helped the Scots increase the lead by serving several aces in a row. The Bears were able to get some points by putting up strong blocks, but lost the first set 25-16 after the Scots pulled out multiple kills and aces to end the set.

“We’ve been working together pretty well in general, but we need to work on better control and making sure we have less self-made errors on the court, like miscommunication,” said Dominique Veinstein, a sophomore.

The second set started like the first with both teams close in score. But after Carlmont lost a point, MA was able to regain momentum, making the score 4-3 for the Bears.

The Scots were soon able to come back after Isaac Troy, a junior, hit the ball straight down off of a set from Tomita, and the Bears were unable to pick up the ball. Troy’s kill allowed Carlmont to get the ball back and widen the gap.

“Even though mistakes may happen, they started to play a lot better and put more trust in each other,” said head coach Michael Lapuz.

Carlmont kept MA at 10 points, causing MA to call a timeout at game point. However, the Scots were able to close the second set 25-10 after Max Jung, a senior, served several aces and ended the set with a back row attack.

The third set began with the Scots creating a lead right away after Ethan Mayoss, a junior, hit the ball from the back row, getting a kill. Mayoss’ kill was then followed by another kill by Jung from the back row.

“This year we have more players who have played before or are naturally talented, which has been really good for our team,” Mayoss said.

Several long rallies took place, the back row building their defense by digging every ball hit to them with confidence. The Bears attempted to get some kills to end the rally, but were blocked twice by Carlmont’s strong defense.

A few communication errors from Carlmont resulted in MA gaining more points, but the set ended quickly with the help of a 10-point serving run from Jung, leaving the Bears trailing 18-6.

Carlmont was able to keep MA under 10-points with Mayoss’ multiple kills and tools off of MA’s blocks, winning the third and final set 25-9.

Despite their win, Carlmont is looking to improve their overall communication and chemistry on and off the court.

“Since it’s still the beginning of the season, it’s been hard to really connect with everyone. But I could see our chemistry being really good because we have two or three more seasons to play together,” Mayoss said.