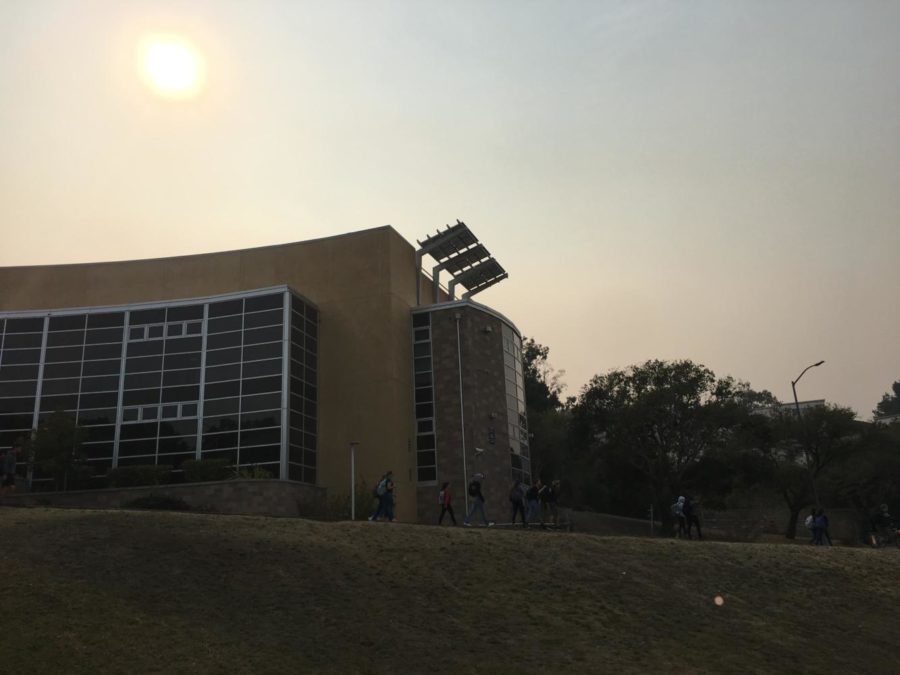 The smoke-filled air lingering around Carlmont High School that caused all outdoor sports to be canceled.

“Per the Superintendent – due to poor air quality from the fires up north, all outdoor activities need to be moved inside or canceled for the duration of today, Wednesday, Oct. 11,” said Ralph Crame in an email that was sent around 1 p.m. on Wednesday.

These cancellations included the postponement of the boys’ varsity water polo game, which had been scheduled to be played on Wednesday at 5 p.m. against Half Moon Bay High School.  This game is especially important because the Scots have to win if they want to stay in their division for the following season.  With the threat of dropping divisions, this was not an ideal time for the team’s game to be canceled.

The air pollution was caused by large fires in Sonoma Valley that began late Sunday evening on Oct. 8.  The fire quickly spread and has blackened 75,000 acres and has destroyed thousands of structures.  Wind caused the smoke to drift South and has caused air pollution throughout much of California.  The air around Carlmont became polluted and went up to a 137 on the air quality index scale proclaiming it was unhealthy for sensitive subjects. This led to the cancellation of the game.

Even though the boys’ varsity water polo team has yet to win, the players saw the cancellation as a negative.

“I believe [the cancellation] was a negative because everyone seemed ready and prepared for the game and it was a last-second decision, so everyone was overwhelmed,” said sophomore Tyler Dartnell. The game had been canceled hours before the game was to start, so it caught many players by surprise.

Boys varsity water polo has not won a game so far during the season but for their final game they are playing Half Moon Bay High School who have a record of four wins and nine losses. The Scots may be fighting for relegation but this game could have been their break to end the season off with a late success.

“The main reason events moved inside or were canceled was that on Spare the Air it said that air pollution in Belmont was a 137 which means that it is unhealthy for sensitive people,” said Patrick Smith, Athletic Director for Carlmont High School. “Games are hard to reschedule toward the end of the season but we were able to reschedule boys varsity water polo for this following Monday.”