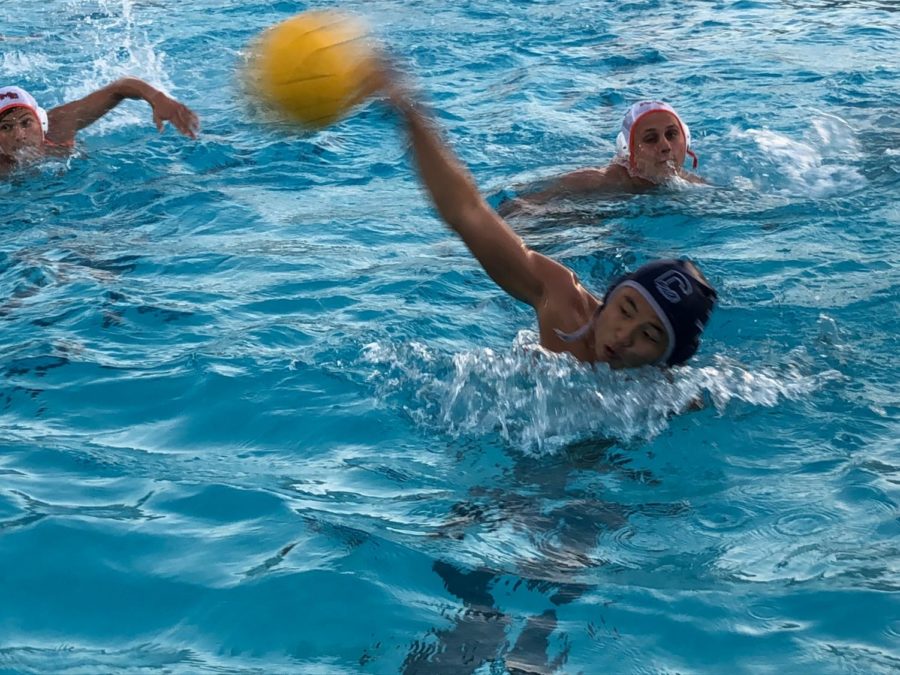 An athlete’s rush of adrenaline in a dire situation is next to impossible to describe, but for the Carlmont boys varsity water polo team, this inexpressible feeling lasted a full one hour, seventeen minutes, and 34-second reality on their senior night this past week.

Outlined against a blue-gray October sky, the Carlmont boys varsity water polo team scarcely pulled off their most nail-biting game of the season. As water polo gold medalist Samantha Hill said, “Before you can win, you have to believe you are worthy,” and yesterday at five o’clock, they believed.

They hardly beat Half Moon Bay in a 12-11 victory in double overtime with outstanding performances by Luke Adams, the starting goalie who had 17 blocks (6 of which occurred in the first few minutes of the game) giving him some new personal records, and Tyler Rachal, the starting right wing player who scored three times, had two assists, and one block.

Carlmont’s Head Coach Justine Hedlund described the intense victory. She said, “With each play, I felt like I was gonna have a heart attack.”

The game began basically as a five-minute swim set as the guys swam back and forth across the pool. Shot after shot, the ball was unable to reach the inside of either goal. With two minutes and forty-one seconds left in the first quarter, Andre Castro and Nate Feix scored back to back goals for Half Moon Bay (HMB). The quarter ended with Half Moon Bay up 2-0. The second quarter followed in a similarly low-scoring fashion, with only one goal from Feix for HMB and one for Carlmont from Oliver Crawford-Shelmadine, assisted by Tyler Rachal. The score was 3-1 at halftime.

The third quarter, however, brought a new tempo to the game with a barrage of goals from both teams. Denton Silfvast started out the quarter with a pair of goals to even the scoreboard for the first time. HMB responded quickly, scoring twice, restoring their lead.

Coach Hedlund called a strategic timeout in an attempt to reconvene and rally the team. With a boost in morale and confidence, Carlmont came out swinging led by a Rachal goal and three in a row from Zach Nathan, ending the third quarter with Carlmont up 7-5.

Tensions were still high at the start of the fourth quarter. Early on, Half Moon Bay’s Andre Castro and Carlmont’s Tyler Rachal exchanged goal after goal, bringing the game to an 8-8 tie with fifty-one seconds left. Half Moon Bay’s winger then cut in on a left-sided drive and delivered a searching cross to the driving set defender, who plowed through the defense and finished with a snapping skip into the bottom left corner.

Consecutive sloppy passes on Carlmont’s front, combined with strong defense on Half Moon Bay’s end, left Carlmont in a jam. Down one, Carlmont got the ball with only two seconds left.

Forced to call their last timeout, Hedlund drew up a Hail Mary: a one in a million chance play that would require perfection, impeccable team chemistry, and an immense amount of skill.

“There was just this indescribable aura that I know we all felt,” Rachal said. “This was it, this was what we have been working towards all season. I just had this feeling that I knew I was gonna push myself further than ever before.”

Crawford pushed the ball back to Zach Nathan who proceeded to make an impeccable pass to Rachal. In a brisk and agile motion, Rachal’s arm slung back as he narrowed his eyes, focusing on the upper right corner. With vigor and courage, he liberated the ball from his firm grip with a snapping motion. The ball flew as if fired from a gun. It hit the water with a crisp, hollow sound with a spiraling motion.

It sailed over the goalie’s extended arm and collided with the net with a ringing splash 0.03 seconds before the blaring siren announced the end of the quarter. They were thrown into overtime.

Overtime moved at a sluggish pace due to exhaustion masking the morals of both teams.

Each team scored once sending the game into double overtime with a score of 11-11.

The second overtime was forced and it was Noah Sun’s breakaway one-on-one skew shot that secured their win with 0:25 seconds left in double over time.

“No words can describe those feelings, it was all there,” said Sun.

As the defeated Half Moon Bay team and the victorious Carlmont team met to shake hands, the crowd continued to roar with relief and awe for this adrenaline-filled, intensely indescribable game.