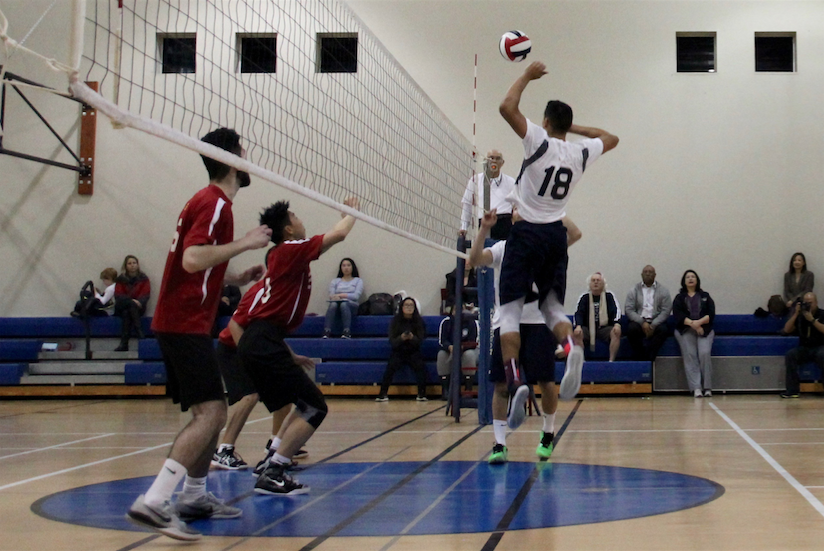 McClellan jumps up to smash the ball to the other side of the court. "Volleyball is really intense. I love the adrenaline and cheers I get after making a shot," he said.

Intensity flooded the court as the Scots boys volleyball team came together to win their first home game of the season.

The bleachers filled up in the Scots Gym on March 10 as the boys volleyball team took the court for their first home game against Mills High School. A series of hits and blocked balls over the net on both sides carried on for four sets before resulting in a 3-1 win for the Scots.

The Vikings served the first ball of the game to score the first point of the match. At first the Scots struggled to retaliate and were left far behind the Vikings in the score. Once the first set progressed though, the Scots got back into motion, and started working together as a powerhouse.

Sophomore Jonah Przybyszewski said, “We were still warming up in the first set, and the team really bonded after finishing it. Chris Ding, Malcolm McClellan and Maxwell Jung all stood out tonight. If we keep playing like this we should go far together.”

Senior McClellan and junior Ding both took over the court against the Vikings. McClellan’s blocks and multiple saves for the Scots kept the Vikings on their toes throughout the entire match. Ding’s hits flew over the set with great force, and his powerful spikes earned many points for the Scots.

“Considering that this was our first real game, we played really well. Of course we were nervous at first, but I think we showed that we are a truly strong team,” said junior Ryan Geronimo.

During the second and third sets, the Vikings and Scots played close in score as they both persisted throughout the whole game. The Scots prevailed for two sets, but lost their winning streak in the third.

The Scots didn’t let the loss of the third set stop them. Multiple serves by junior Peyton Young, Przybyszewski and Ding resulted in aces, adding points to the Scots’ score. Outsider hitter Jason Jung, a junior, also spiked the ball over the net and got through the Vikings’ blocks, creating more obstacles for the opponent to try to overcome.

During the final set of the night, multiple saves were made by McClellan with his feet and head, helping the team get the ball over the net and avoid points scored against them. Ding and his teammates spiked the ball well many times over, helping to earn an overall victory by winning the fourth set.

Jung said, “We’re getting super excited this season, and are hoping to get to CCS.”