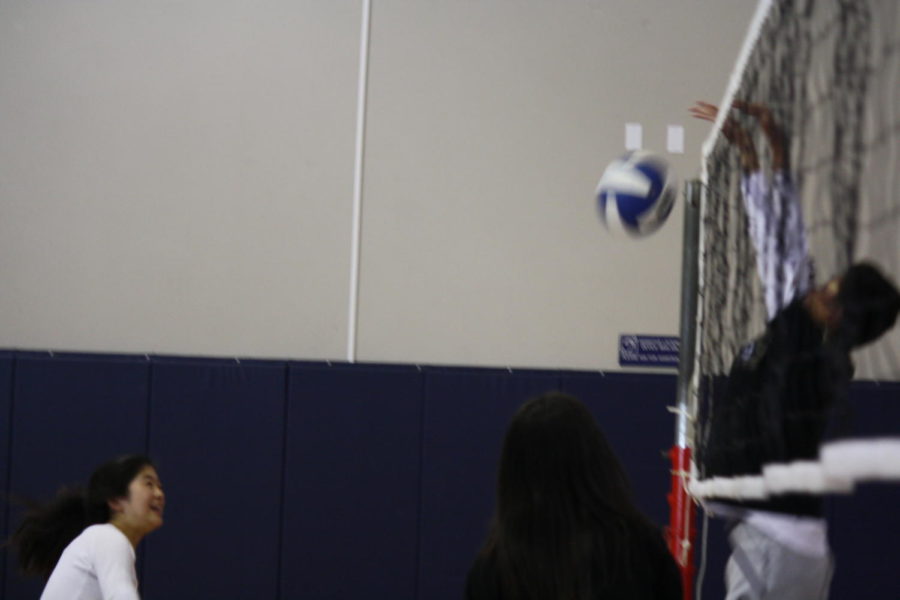 Freshman Hannah Wu getting blocked by Kyle Lau, a sophomore.

Laughter fills the gymnasium as potential players for the Carlmont boys volleyball team practice with one another.

During lunch on Nov. 7, the Athletic Director Patrick Smith unlocks the doors to the Scots gym so players can scrimmage together, hoping to perfect their skills or just to have fun.

“The open gyms help us keep our skills up so we don’t become rusty and it also helps us build up chemistry as we’re playing with people we’ve never played with before,” said Kyle Lau, a sophomore who was on the varsity team last year.

The average amount of people who attend has only been around 15, as the freshman are usually the ones going to the open gyms. Lau tries to schedule the open gyms so they are not on math contest days or on Wednesdays since those days are shorter.

But even though it’s an open gym for the boys volleyball team, a few girls come to these open gyms as well.

“It’s fun to play with friends, especially the boys since they hit harder,” said Hannah Wu, a freshman who was on the girl’s volleyball team.

While the group isn’t too focused, they still have a lot of fun joking around and “making impossible saves,” said Wu.

Last year, the JV team had a record of 2-6 according to Nick Mattas, a junior who was on the team. The team faced many challenges in their season, which negatively affected their record.

“The majority of our players never played volleyball before, so those first couple weeks of preseason were a good learning experience… As we progressed through the season, our biggest challenge was communication,” Mattas said.

On the other hand, the boys varsity volleyball team had a record of 14-22, only doing a bit better.

“We had the communication and everything, but there were some very strong teams that we had to adapt to, and I’d say we didn’t adapt to them as well as we could’ve since we lost those games,” said Jonah Przybyszewski, a senior who was on varsity last year.

The next open gym will be on Tuesday or Thursday next week in the Scots gym, and tryouts will start next year at the end of January.