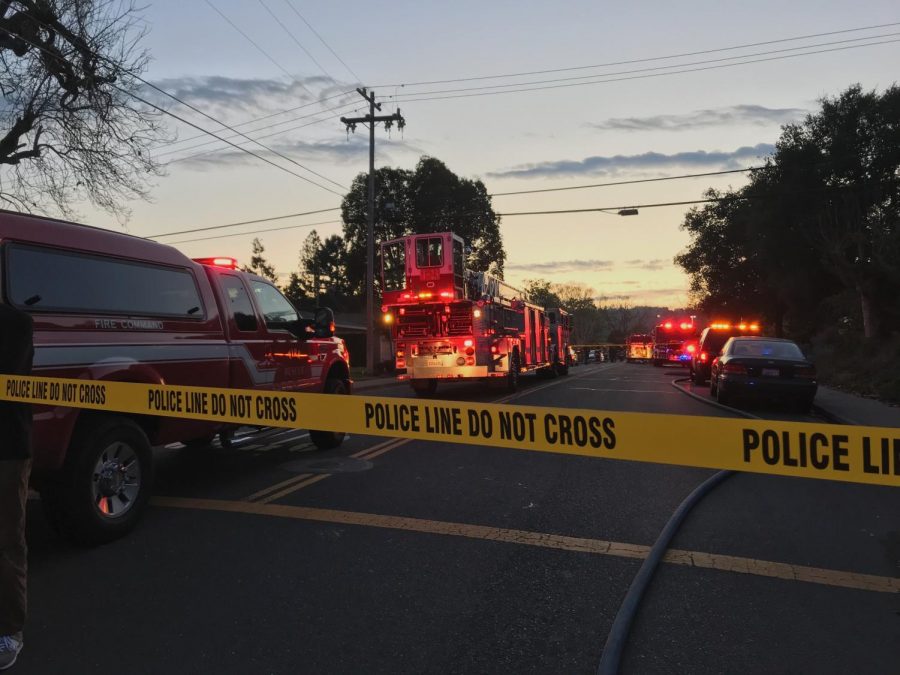 The 1500 block of Chula Vista Drive is taped off while officials investigate the cause of the fire.

Following the evacuation and extinguishing of flames at a local house, the 1500 block of Chula Vista Drive was shut down as a crime scene.

The house fire was reported at 3:06 p.m. on Dec. 17. Within the hour, it was controlled, and the police began to investigate a possible explosion. As of now, the cause of the fire is still under investigation.

“We treat these incidents with care and we don’t make assumptions. We have the detectives working with our investigators to determine the cause of the fire,” said Ray Iverson, the San Mateo Deputy Fire Chief.

According to witnesses, the fire burst through the front door and garage of the house, critically injuring Walter O’Dell, a 71-year-old man. He was the only known resident of the unit and had severe burns on over 40% of his body.

O’Dell was promptly taken to Stanford ValleyCare Medical Center by medevac, per his request. The helicopter landed on Carlmont High School’s football field, as it was the only nearby open space, and officers accompanied him during his flight as well as at the hospital.

O’Dell passed away on Wednesday morning.

The fire occurred just hours after Carlmont students took their second-period final. Sydney Phan, a sophomore at Carlmont, is a next-door neighbor of the victim of the fire.

“It was definitely a scary situation because it was pretty close to my house. I also had to leave my house, so I couldn’t study for finals,” Phan said. “[The man ] is elderly, and very friendly — he always says ‘hi.’ He’s a nice guy, and not the type to pick a fight with someone.”

Despite the impact of the fire on the man’s residence, it did not affect the surrounding neighborhood.

“Although this fire did have a large impact on the specific house, it didn’t have a large effect on any of the surrounding houses. Inevitably, it was scary, but my family and I weren’t too stressed about it,” said Luiza Coimbra, a sophomore who lives a block away from the house.

However, because police had to block off part of Chula Vista Drive, a traffic backup resulted near Charles Armstrong School, prompting officers to try and ease traffic by directing people on both sides of the blockade.

Although the fire was not life-threatening, it rattled the community nonetheless.

“This is the first time we’ve had a bigger fire like this. It was shocking to have something like this, especially in your backyard,” neighbor Adam Davies said.

This story will be updated as information becomes available. Last updated on Dec. 22, 2019.